Not a Magnet School 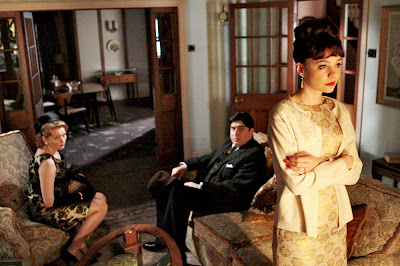 “Period piece” tends to call up visions of a long-ago past filled with corsets, powdered wigs, and fancy language. We’re getting to the point, though, in which a film made now about the 1960s is potentially looking a good 50 years into the past. If nothing else, that defines the idea of a period piece, which makes An Education a period piece by definition.

This is the story of Jenny (Carey Mulligan), a young girl living in London and attending an exclusive private school. Her parents (Cara Seymour and Alfred Molina) are keen on her getting into Oxford, and on doing everything possible to make that happen. This is particularly true of her father. Their daily conversation seems to consist of what she is doing to impress the folks at Oxford, in fact. There are some odd ideas here—she is forced to consider playing the cello as a hobby, which means that her father tells her she doesn’t need to practice it, because hobbies aren’t for practicing. However, she’s also not allowed to quit the youth symphony, because that shows that she’s serious about the hobby. Her mother is quite a bit less intense, but no less focused.

Jenny’s world changes dramatically one day as she’s caught in a rainstorm after a rehearsal. She is offered a ride home from a man roughly twice her age driving an exclusive and rare sports car. His name is David (Peter Sarsgaard), and he’s quite the charmer. Jenny is guarded around him, but eventually consents to ride in his car with him at least as far as her house. She runs into him again a few days later, and the two begin a very odd courtship—one, mind you, that wouldn’t have seemed at all odd 100 years earlier.

Jenny begins spending more and more time with David, and begins to learn a few things about him and his friends. Essentially, David is a con man. While he’s happy to bilk old ladies out of rare treasures that they don’t quite understand or appreciate, he’s much more keen at his main occupation. In a nutshell, he moves West Indian families into neighborhoods, and when the old ladies who are scared of their color become anxious to move, he buys their flats at a greatly reduced rate, making himself a tidy profit. We get more evidence of his abilities when he effectively tells Jenny’s parents that he went to Oxford and knows C.S. Lewis personally. This is enough for them to let her head off to Oxford with him for a few days. Sex is certainly hinted at, but they avoid it, mainly because Jenny says she wants to wait until she is 17.

But that doesn’t stop the romance between the two. On her 17th birthday, David manages to con her parents once again, and takes her to France, and since she’s now 17, this leads to sexy time. David asks her to marry him, and she goes forward with this plan, forgetting about school and Oxford until she makes the discovery that upsets the strange little world she’s been inhabiting. Of course, if there were no twist, we really wouldn’t have much of a movie.

Here’s the thing: it’s difficult for me to say too much against this film, because it has a lot going for it, not the least being the performance of Carey Mulligan. A lot of Jenny’s feelings come through directly in Mulligan’s face, and we can often tell exactly what is going through her mind at a given point by her expression and body language. That’s smart acting, and worth watching because of it. Similarly, Peter Sarsgaard as David is both charming in the main and smarmy in the specific, making him believable both as a man capable of wooing Jenny’s parents and as a man who makes his living lying to little old ladies.

I can’t complain about much in this film except for the story itself. I’ve said over and over again, coming of age stories for girls involve sex, and typically involve completely inappropriate sex. In this case, Jenny comes of age with her relationship with David, a man nearly twice her age. And of course, this ultimately culminates in sex. In many ways, this reminds me of the film Fish Tank, although this one came first. There’s a great deal of similarity between the two, actually, although I liked this one more.

My other issue is the ending. Once the twist comes, and the twist isn’t much of a surprise, there are only a couple of ways this could legitimately end. The ending here is the most Hollywood possible, and that’s kind of disappointing.

Really, these are my only complaints with this film. It’s well acted, smart, and beautifully filmed, and while I wasn’t alive much during the 1960s, it seems to capture much of the age pretty well. I could wish for more, but it doesn’t look like I’ll get it.

Why to watch An Education: Almost a comedy of manners, but not quite.
Why not to watch: It’s too predictable.