Film: The Passion of the Christ
Format: Streaming video from NetFlix on laptop 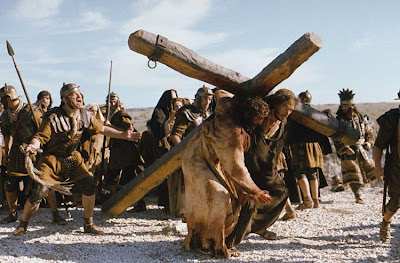 So it occurs to me that Mel Gibson has a torture fetish. We get some torture in Braveheart, of course, and there’s plenty of head chopping and ritual sacrifice in Apocalypto, but never do we see continuous and unceasing torture like we do in The Passion of the Christ. With the exception of a few flashback scenes, the vast bulk of this film is nothing but brutality of a level that a director like Eli Roth can only pee his pants thinking about.

Before I get into talking about this too much, I should make a few things clear. First, I am an agnostic by personal definition, atheist by technicality in that there is no god I worship. I prefer the term agnostic, though, since it is my contention that no one can or does know of the existence of anything beyond this mortal coil. I’m also of the opinion that any religion in existence or that has existed simply hasn’t gotten it right. All of this is really neither here nor there, but I also understand that my beliefs, or more accurately my lack of same, could well color the following paragraphs. It’s only fair to get that out in the open.

I’m also going to avoid history here, even biblical history. There are plenty of true believers who will claim that this is an accurate representation of the scourging and crucifixion of Christ, but this simply doesn’t hold. There’s nothing in any of the gospels, for instance, claiming that Christ frequently and repeatedly saw Satan as he underwent his various trials. Even the carrying of the cross differs dramatically from the traditional Stations of the Cross. We’re going to let this go for the remainder, though. There’s simply too much to try to pick out, and it’s an argument I don’t want to have. (And yes, Gibson got the Stations wrong. Here, Christ falls twice before meeting his mother, when traditionally, this happens after the first fall. Simon of Cyrene helps before the second fall as well in the Stations. The Stations of the Cross include three falls, while Gibson’s version of Christ falls constantly. And then there’s the whole nails-through-the-hand thing. And the fact that the actor playing Christ is about as Arabic as I am.)

Instead, let’s talk about what’s here. What’s here is a shit-ton of blood. Seriously, I like horror movies, but The Passion of the Christ is bloodier than most. Christians, by and large, seem to like the bloody Jesus, too, since you won’t find too many films more passionately defended by the faithful.

Anyway, this story is pretty well known. Christ (Jim Caviezel) prays to be delivered from what is to come, but gets dragged before the Pharisees anyway after being betrayed by Judas (Luca Lionello). He’s beaten senseless (accompanied by huge swashes of blood and bloody chunks), further tortured, and then forced to drag a cross to the point of his crucifixion. He’s nailed to the cross, put up, and then dies. Gibson decides to focus almost entirely on the suffering here, giving us a few spare moments of the resurrection. Again, it’s evident that this film is all about the bloody version of Jesus, and not the raised one.

Really, that’s the whole film. It’s a two hour extended torture session. Caviezel is a veritable font of gore; who would’ve thought he had so much blood in him. The majority of the Jews and the vast bulk of the Romans are depicted as savages and sadists. Of course, that’s also entirely the point here.

So let’s get to it. No, I did not like this film. I was disturbed by it, certainly, because I was supposed to be. This isn’t a film that allows anyone to watch and not react to it. But my reaction was not one of spiritual uplift; instead I was simply grossed out by it. The intent here is obviously to cause a real visceral reaction in viewers, to create a sense of outrage as well as spiritual closeness with Christ. I’m sorry to say that didn’t happen. It’s simply too much. There’s only so many times you can see the whip hit and watch Caviezel’s head rock back before it simply stops having any meaning.

I’ve been spiritually moved by film before. When I think of films that have contained a true spiritual element that has touched something in me, I immediately go to one like The Passion of Joan of Arc. That film has stayed with me since I watched it, and I still feel a true sense of honest spirituality from it. This film strays too far from something honest and instead tries at every moment to be manipulative. It’s overkill, and it’s ugly, and ultimately, it’s an unending scene of torture and mutilation. Done, and never again. After watching this, I highly recommend watching The God Who Wasn’t There, particularly if you’re a skeptic.

Final note: feel free to comment on my take on the film. Start commenting on my lack of religion, though, and I’ll delete your comment as soon as I see it. Fair warning, folks.

Why to watch The Passion of the Christ: If your religion swings this way, you’ll find it very moving.
Why not to watch: It’s a snuff film with a budget.

Email ThisBlogThis!Share to TwitterShare to FacebookShare to Pinterest
Labels: drama, Mel Gibson, The Passion of the Christ