As is evident from looking back at my reviews over the past couple of years, I am not someone who has decided to rebel against NetFlix. While I wasn’t thrilled when the prices got bumped, I continued to use the service and still do. I’ve also started using Hulu+ more and more, and I like it pretty well, especially their habit of having lovely, lovely Critereon films available for streaming. There are more channels available on the Roku box, though, and I thought it was time to try one out. I picked Popcornflix. Popcornflix is, well, it’s pretty shitty. Ads pop up right in the middle of scenes, almost at random, and often the same ad plays twice in a row. And, most of the movies suck pretty hard. 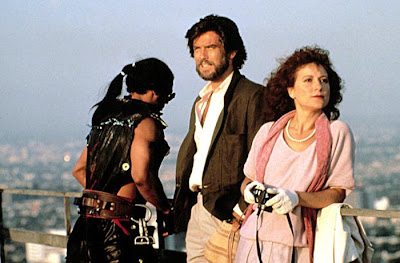 But not all of them suck. Nomads, starring Pierce Brosnan and Lesley-Anne Down is a mildly interesting horror/thriller from the heart of the 1980s. It’s hard to call Nomads a great film, and it’s almost a stretch to call it a good one. But it’s not a bad one, and sometimes that’s enough.

We start in a hospital where a doctor named Flax (Down) working a long shift at the hospital. Her nap is interrupted with the arrival of a man raving in French. He’s handcuffed to the bed and shouting something unintelligible. Dr. Flax goes in to check on him and he breaks free in a scene featuring some surprisingly disconcerting and inventive camera work. As he leaps at her, the man whispers something in the doctor’s ear. They both collapse, and we soon discover that Frenchy is dead.

But that can’t be the end, right? No, of course not. It appears that those whispered words have infected our doctor, and she’s starting to see flashbacks of the man’s life. Specifically, she’s seeing his last week. We learn that his name is Jean-Charles Pommier (Brosnan), he’s married to Niki (Anna Maria Monticelli), and that he’s an anthropologist who specializes in nomadic cultures.

We also learn that the house the Pommiers have moved into has something of a history. A murderer lived there recently, and evidently there is a group of people in the area who are more than a little keen on that particular case. This is evidenced by the terrible graffiti on the garage, the additional graffiti inside the garage, and a collection of disturbing news clippings that Jean-Charles finds. It’s evident that the murder fans are the ones who keep driving past in the van. As an anthropologist, Jean-Charles is naturally intrigued. He tails them for a day, taking pictures of their various crimes and assaults.

And then he discovers that the leather-clad, van-driving punks don’t show up on film. At all. This is because (obviously) they aren’t human. They are a type of Inuit spirit that causes pain, mayhem, and destruction, and can sometimes take human form (and they’re led in this case by Adam Ant). More importantly, the creatures are aware of Jean-Charles and are now coming for him, and they will not be denied their prey. Of course, since Jean-Charles dies at the start of the film, we know that they get him. What still in question is whether or not they know about Dr. Flax and Niki.

That’s pretty much it. It’s ultimately pretty standard fare when it comes to supernatural horror. There are a couple of decent jump scares and a couple of creepy moments, but there’s no real new ground covered in this film. If you’ve seen a ghost story before, you’ve seen something pretty close to Nomads. Pierce Brosnan looks the part, but can’t quite pull off a good French accent, and while the scenes of Dr. Flax having flashbacks of Pommier’s life are kind of fun, these are treading old territory, too.

I was most impressed with the camerawork. There are some truly interesting shots, and the one at the start where Pommier tells his secrets to Dr. Flax is truly vertigo inducing. I watched it a couple of times and am still not quite sure how it was done. There are a few others, and these interesting camera movements essentially stand in for special effects, because those are lacking almost entirely.

I can’t call Nomads scary, because it isn’t. Even the ending is pretty much what you expect, and the big reveal is sort of obvious before the reveal moment. Still, you could find something worse to spend your time on if you’re looking for something to keep you entertained and not make you think too hard.

Why to watch Nomads: A fun story with some surprising camerawork.
Why not to watch: Pierce Brosnan’s French accent.