Film: A Room with a View
Format: Streaming video from NetFlix on laptop 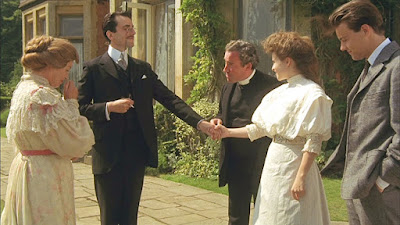 After yesterday’s zombie bacchanalia, I thought it best to go as far in the opposite direction as I could. A Merchant Ivory production seems to fit that bill pretty nicely. Rather than flesh rending and the devouring of our heroes, we get a romance of excessive manners and proper breeding. I can’t call myself an aficionado of the company nor of the genre, but still, A Room with a View awaits and must be watched.

This is a difficult film for me to judge. I’ll be the first to say (okay, not really since I’m watching this 27 years after it was released) that it’s filled with excellent performances, in some cases by actors who have gone on to tremendous careers and a great deal of acclaim. I also understand very much that the things that annoy me here are supposed to annoy me. The characters I find infuriating are infuriating by design. I get that, but there’s still the fact that I have to spend time with them in the first place.

I once called Brief Encounter a timid romance, but that’s only because I hadn’t seen A Room with a View yet. In this film, the people seem to be incapable of physical contact with each other. There is a constant dread of anything remotely scandalous, and virtually everything conceivable is considered scandalous in this just-post-Victorian, fin-de-siecle time.

I’d call the name of our main character, Miss Lucy Honeychurch (a very young Helena Bonham Carter) rather astounding save for its disturbing similarity to my own. Anyway, Miss Honeychurch is vacationing in Florence with a chaperone, her aunt Charlotte Bartlett (Maggie Smith). Charlotte is a spinster, and we’re given the distinct impression that she’s a spinster because she’s so proper that she’s probably never peed. Anyway, they were promised a room with a view and they don’t get it. A father and son, Mr. Elliott (Denholm Elliott) and George Elliott (Julian Sands) offer to switch rooms with the pair so that they can have that view, and naturally, Charlotte is completely scandalized by this because it might possibly make Lucy beholden to the young man. In fact, she’s so scandalized that she won’t let Lucy take the room that was George’s. Mr. Elliott is something of an odd duck, and George is moody and passionate.

Things come to a head when Lucy comes across George in a field of barley and he kisses her passionately. Of course, Charlotte sees this and is scandalized. This doesn’t stop her from passing on the story to an itinerant novelist named Eleanor Lavish (Judi Dench) staying at the same place (and yes, this will become important later). So, thoroughly wracked with scandal because someone dared kiss Lucy without a proper proposal of marriage, the pair return to England.

Back home, Lucy is wooed by the pompous and somewhat effeminate Cecil Vyse (an unrecognizable Daniel Day-Lewis) and after a short courtship, she agrees to marry him. Things become complicated when a nearby home is rented to (of course) Mr. Elliott. George comes down on weekends and becomes an immediate friend of Lucy’s brother Freddy (Rupert Graves), and thus becomes a fixture at the house on weekends. Lucy naturally is disturbed by this because she’s supposed to be, and not for any other reason. When, later on, George goes in for seconds, she kicks him out of her house permanently. Incidentally, all of this happens on the same day that she discovers the passage of their kiss in Eleanor Lavish’s latest book.

So everything comes to a head, and because it’s a period romance instead of a tragedy or a black comedy, it’s all going to work out in the end, once Lucy essentially has it pounded into her head that acting on what she wants is okay instead of spending her life emotionally corseted.

I seem to have managed to get through all of this without mentioning Mr. Beede (Simon Callow), a sort of family friend, local vicar, and all-around dude. He’s one of the better characters in this film, if only because he seems to know what’s going on all the time but has the sense to keep himself out of it unless asked. Also, I sort of like Simon Callow, so I’m prone to like the characters he plays.

So my biggest problem with this film is how proper everyone is all the time. This turn-of-the-century England is depicted as so proper that it’s a wonder that a subsequent generation could have ever been produced since the very idea of sex seems to make everyone go all faint. The dialogue, while quite pretty in places, is peppered with the sort of lines that begin with “Don’t you think” followed by something pompous or vaguely looking for approval.

Yeah, I know this is the point. I get it. I just get bored with it pretty quickly.

Interestingly, and seemingly completely out of place, there is a long sequence of full-frontal male nudity in this film, so if you have a desire to see Julian Sands, Rupert Graves, and Simon Callow running about in the altogether, this is the film for you. I didn’t really expect that, but there it is, and this sequence goes on for far longer than it needs to. Seriously, they’re all splashing about in a pond, and they get out and race around it twice. I’m mildly surprised that Harvey Keitel wasn’t there to join in.

Anyway, I can't call this a bad film, because it isn't one. It's simply one I found pretty tedious. I also can't for the life of me understand why anyone would find this film romantic. Everyone in this film is so passionless that virtually everything that happens is about as emotionally stirring as watching carp spawning. It's as if the world's morality managed to maximize itself at this one time and place--films set a few years previous or a few years after certainly have more sexy time than this one. Seriously, Lucy is scandalized by the fictionalized version of her first kiss with George despite the fact that only four people in the world including her know who is being depicted in the description. One is left to wonder how Charlotte Bartlett would react to this day and age of sex tape releases and booty calls. Then again, I'm not certain I'd really want to know.

Why to watch A Room with a View: If this particular brand of romance floats your boat, you’ll find much to enjoy here.
Why not to watch: There’s a point where manners should end, and this film tramples over it.