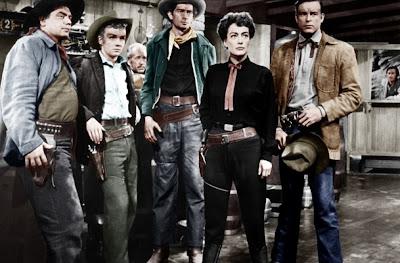 Genre films offer particular expectations. As members of the audience, we expect specific things, but we also like a surprise now and then. It seems like back in the day that when a film did attempt to offer up a surprise, the idea was to come up with one thing that the audience might not expect and otherwise present a pretty standard film. Honestly, it seems like that’s still what happens. In the case of Johnny Guitar, the big switch is that our protagonist and antagonist are both women, quite unusual for a Western. It also didn’t prevent the filmmakers from naming this after one of the male characters.

As the film opens, we see a drifter with a guitar strapped to his back riding across a prairie. This is our title character, Johnny “Guitar” Logan (Sterling Hayden), and he will prove to be suitably deep voiced and manly. He observes a stage being robbed, then rides up to a saloon out in the middle of nowhere. It turns out that this is is final destination—he’s looking for a woman named Vienna.

Vienna (Joan Crawford) runs the place. Her plan, more or less, is to hang on until the railroad comes through the territory. She wants to build a depot, which will make the town a destination, which proves to be unpopular with the local cattlemen. Vienna herself is decidedly unpopular with Emma Small (Mercedes McCambridge), who sees our saloon keeper as nothing more than a cheap tramp.

It’s more than that, though. We learn that Emma’s brother is killed in the stagecoach holdup. Emma puts the blame on The Dancin’ Kid (Scott Brady), who is a known associate (and yes, exactly as you’re thinking) of Vienna. It’s pretty evident right away that Emma has a thing for the Kid. The Kid and his gang—Turkey (Ben Cooper), Corey (Royal Dano), and Bart Lonergan (Ernest Borgnine)—claim to be running a silver mine. While the sheriff (Frank Fergusson) tries to keep peace, it is the vitriolic Emma and main rancher McIvers (Ward Bond) who are calling the shots. They want the Kid and his gang out in 24 hours. They want Vienna gone, too.

What’s next is in part surprising. It turns out The Dancin’ Kid and his gang are working a silver mine, and they didn’t rob the stagecoach, not that anyone believes them. They decide that before they leave town, they’ll rob the bank. After all, if they’re actually accused of something, they may as well make it worth their while. We also learn, no surprise here, that Vienna and Johnny Guitar have something of a past. She called him out for protection. He claims not to wear a gun, but he’s a stone-cold killer behind his instrument.

And so, Johnny Guitar hits on all of the Western clichés, or at least a lot of them. We have the importance of the train and all that it represents. We have cattlemen upset about the incursion of progress and people into their area—more people means less range for the cattle. There’re twisted passions and love triangles, and gunfights, and posses. It’s what you sign up for when you sign up for a Western. The main difference is that our focus (regardless of the name of the film) is on Vienna, and in part on her feud with Emma.

The strongest thing in this film is Joan Crawford, although she’s backed up by a pretty strong cast. One of her workers, for instance, is an old guy named Tom who works as a cook. Tom is played by the stringy and gravel-voiced John Carradine, who was evidently in 50% of all movies made in the ‘50s and ‘60s. Ernest Borgnine isn’t in the film much, but he’s generally worth watching, too. Mercedes McCambridge is distinctive specifically because of her voice. She has a voice that grates, and there’s no surprise tfor me that she’s best known as the voice of the demon in The Exorcist.

Sterling Hayden, oddly is sort of the weak link here. He could have just as easily been replaced by just about anyone capable of faking a fast draw and riding a horse. The movie is named after him, but he’s absent for large parts of the film, and plays a pretty standard gunslinger hero.

To a modern audience, there are things there that come across as silly. For instance, in one part, Vienna is offered Turkey’s clothing to change into. She does, and we learn that evidently, she and Turkey are the exact same size and get their clothing tailored the same way. So it would appear that Turkey liked bright colors and had his shirts cut loose to allow room for growing breasts.

Johnny Guitar has its strengths, but it’s not what I would consider a truly great film, or even one that’s particularly noteworthy. It’s more or less a curiosity because of the role of Joan Crawford. Gender switching in terms of focus is all that sets it apart from about 80% of other Westerns. In that respect, it’s pretty disappointing.

Why to watch Johnny Guitar: A woman-focused Western? For real?
Why not to watch: Other than that, it’s like every other Western.