As I continue to look for the films I’ve said I need to watch, I’m finding a whole number of places to look for them. Pub-D-Hub shows public domain films and shows them commercial free. The selection is, thus, not the best. However, the films appear to be pretty well transferred, and I dig the complete lack of commercials. Chalk this one up in the win category. 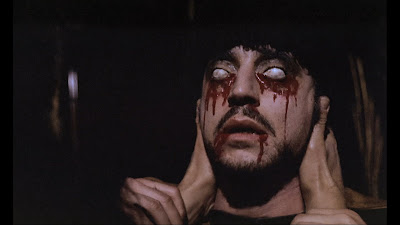 One of the films I found on Pub-D-Hub is the early ‘70s cult film Horror Express. This is not a Hammer Films production, but it feels like one, in no small part because it features both Christopher Lee and Peter Cushing, the two most classic actors of the great Hammer horror films. It’s also about as silly as the classic Hammer films, and about as much fun, which I suppose gives away my opinion on the film here in the second paragraph. The “science” in this film is the worst kind of bullshit, but it doesn’t really matter, because you don’t watch a film called Horror Express for a lesson on paleontology.

Professor Sir Alexander Saxton (Lee) has made a unique discovery of a frozen humanoid fossil in the Russian wilderness. He is transporting it back to England via train. Also on the train is a colleague of his, a man named Wells (Cushing). Even before the train sets out, things are happening—a known thief is discovered dead, his eyes bleeding and turned white. If you think that the discovery of the fossil and the dead thief are related, congratulations! You’ve seen a movie and understand that especially in older horror films, red herrings don’t exist that often.

Of course, the fossil thaws out and it’s still very much alive. It kills people by essentially sucking out their brains. We discover this when an autopsy is performed on a victim and the victim’s brain is essentially rubbed smooth. It becomes evident (at least in the logic of the film) that the creature is absorbing the memories of its victims. We’re in for something of a shock when, about midway through the film, the creature is killed. However, we learn that the fossil wasn’t the creature that we need to worry about. The real danger is the energy-made alien being that was inside the fossil. It can jump from body to body, retaining all of its memories and absorbing more and more memories from everyone it attacks.

All of this leads up to the final battle between our good doctors and the alien, which suddenly has the ability to raise all of its victims from the dead as white-eyed zombies. That, ladies and gentlemen, plus the entertaining cameo from Telly Savalas as a Cossack, are the reasons you watch this film.

This is not a film that can really be taken very seriously, but it’s not really intended to be. The science is the sort of thing that even my kids would find laughable. The creature, for instance, maintains its visual memory not in its brain, but in its eyes. This means that when they kill the fossil and examine its eyes, they can see everything that the creature has seen by examining drops of the creature’s eye fluid under a microscope. And they see a brontosaurus and a pterodactyl, and the police inspector who the creature transfers itself to as it dies.

There really isn’t much here that I would call terribly scary. It’s creepy in a few spots, and Telly Savalas is suitably nasty and brutish as the Cossack, but there’s nothing here that anyone older than eight or nine would find nightmare worthy. Perhaps that’s okay. It’s enough that it’s entertaining for what it is. It reminds me very much of a film from the 1980s called The Hidden, which is similarly forgotten and unloved, and undeservedly so. Christopher Lee is great, as always, and in this film he gets to play something akin to a hero, which is sort of unusual for him. Cushing is similarly entertaining, and often gets the best lines. If nothing else, the film is noteworthy in that it puts these two actors, so often on opposite sides of a given film, on the same team.

Horror Express is by no means a great film, but it is a damned fun one, and I enjoyed watching it.

Why to watch Horror Express: Goofy fun and a great cast.
Why not to watch: It’s as silly as you think it is.