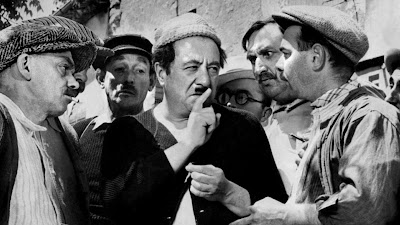 There are plenty of stories about infidelity out there, but none quite as strange as L’Femme du Boulanger (The Baker’s Wife). This is a film that blends comedy with pain, loss, drama, romance, and morality. It’s not at all the film I expected, and I continue to realize that “not what I expected” is frequently a good thing.

Here’s the story in a nutshell—a baker and his wife move to a small town in southern France. The town has been desperate for a new baker, since the last one was inconsistent, and they’ve been living off stale bread for months. The new baker makes a top quality product. He’s also considerably older than his wife, who is young and attractive, and immediately falls for the shepherd of the local marquis. That night, she runs away with the shepherd, leaving her husband distraught and unwilling to bake more bread until she comes home.

This would be enough for the story, but there’s more here. It seems that everyone in town has an active feud with at least one other person in town. When the baker’s distress over his wife happens, initially everyone finds his suffering humorous. When everyone realizes that he’s serious about no longer baking, the town springs into action, and many old enemies are forced to work together for the benefit of the baker, and for their own stomachs. And that’s really it.

So let’s talk about some specifics here. First, the characters throughout the film are interesting in that they are clichés, but also more than clichés. The priest, for instance, is young and naïve. He uses the baker’s misfortune as a subject for his homily, which further distresses the baker, since the open secret of his wife’s disappearance is no longer a secret at all. He can’t even pretend. The priest is, of course, overtly and overly pious while the schoolteacher is naturally a freethinker and something of a pedant. The marquis is a rake and a rogue, but defends himself by suggesting that such sins are sins of the rich, and thus not an influence over the townspeople. Sure, these are in many ways stock characters, but they are also made interesting throughout the film, and each plays a part in the narrative.

It’s interesting that the film is called what it is, since the wife appears almost not at all in the film. She’s there at the start and we see at least a part of her disappearance, but for the middle section of the film—at least an hour—she’s nowhere to be seen. Instead, the film focuses on the baker himself (played by single-named Raimu) and his process of coming to terms with the fact that his wife has run away with another man. Initially, he can’t and won’t believe it. He tells himself that she has run off to visit her mother knowing full well that she hasn’t. The constant jibes from the locals don’t help, and he turns to drinking, something he says early in the film that he never does.

The middle section of the film is perhaps too long, and could stand to be neatly trimmed. For the relatively simple story this film tells, the running time of nearly 2:15 is a good 20 minutes too long, and most of the trimming needs to come from the middle 90 minutes. The opening is important, since it establishes the town’s desire for good bread, and the ending is similarly critical, which I’ll get to in a minute. We get too much denial of reality from the baker, too much of him drinking away his troubles, too much of the other townspeople getting in his way with their own problems. Snipping out a couple of minutes here and there would speed up the story and would cost almost nothing in terms of what the audience gets from it.

That said, I wasn’t particularly bored at any time, but there are moments when I wanted to see the story pick up and move on from where it was. When the schoolteacher and priest go to find the wife, for instance, their journey across the marsh is unnecessarily long and detailed for what we need to see happening. It’s not bad as it is; it’s just overly fat.

It’s all worth it in the end, though. The final 15 minutes or so are beautiful, filled with a sweetness and a pathos that is almost unprecedented. It’s worth talking about, but I’d rather not spoil what is a lovely moment of film for anyone who hasn’t seen this. Suffice to say that the wife’s return is accompanied by a most unusual combination of scolding, self-pity, anger, and forgiveness, that is unique mostly for the fact that it is entirely believable in its language and poignancy. I’ll leave it there.

And so, L’Femme du Boulanger proved to be a surprise, and a good one. Let’s hope the same holds true for the rest of the films I know little about.

Why to watch L’Femme du Boulanger: A story that you may not expect.
Why not to watch: It goes on too long for its story.

Posted by SJHoneywell at 5:10 PM