Divorce for Fun and Profit 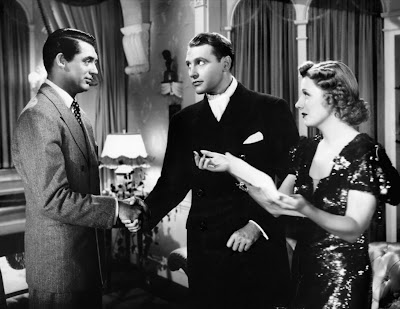 I suppose it makes a certain amount of sense that movies from the heart of the Great Depression would be about people with more money than sense in general. That’s certainly the case for many of the screwball comedies, at the very least. We see people who can focus on the silly business of living because, unlike the bulk of the audience, they aren’t currently focused on the more critical business of having enough food to make it through another day. This is certainly the case with The Awful Truth, a film that really more than any other launched Cary Grant’s career in light comedies.

Jerry Warriner (Grant) has been pretending to be in Florida, and is at his club faking a tan so that he’ll look the part when he gets home. When he does, he discovers that his wife Lucy (Irene Dunne) is nowhere to be found. She strolls in not much later with her vocal coach, Armand Duvalle (Alexander D’Arcy), claiming that due to a broken down car, they had to spend the night in a cheap inn. While he’s indignant at first, it lasts only until she discovers that the oranges he brought back with him from “Florida” are actually from California, and the accusations start going in both directions.

Well, naturally, this causes a rather complete rift between the Warriners, and before you can say “divorce court,” the two of them are untying the knot over suspected infidelity. The only real bone of contention is the eventual whereabouts of Mr. Smith, their dog. Through a bit of trickery, Lucy wins him, but Jerry is granted visitation rights. The pair is granted a 90-day separation before the divorce just to see if it’s what they both want. Now, since this is a screwball comedy, you can probably guess what happens next.

Did you guess that they both start looking for love in other places in part to make each other jealous? Good guess! Lucy begins an odd courtship with Dan Leeson (Ralph Bellamy), an oil man from Oklahoma. It’s soon evident that Dan is a bit of a lout and pretty uncultured, but Lucy at least claims to fall for him and they soon plan to marry. A sudden desire for reconciliation from Jerry is quashed through a mix-up with Armand (again!), and while Lucy’s dreams of a new marriage have been squished, Jerry goes on his own marital quest.

Of course, turnabout is fair play here, and Lucy starts working on ways to split up Jerry with his new flame, Barbara (Molly Lamont). Naturally (and don’t worry—this really isn’t much of a spoiler), Jerry and Lucy realize what a complete mess this whole thing as been. You didn’t really expect them to end up divorced, did you?

What I find so interesting and yet so infuriating with this film is just how flatly frivolous it is. These are characters who seem to have all of the emotional depth of a saucer. For instance, we learn at the divorce trial that the two only married because both of them wanted to buy Mr. Smith from the pet store at the same time, and thus married because they wanted to provide him with a good home. There’s nothing to these folks—neither of them appear to have a job or any means of support other than having craploads of money. While this certainly allows them the freedom to pursue new romances (and each other), it also makes me wonder exactly who these people are—undoubtedly not what I’m supposed to be thinking.

Ultimately, the awful truth about The Awful Truth is that it’s fluffy and pretty much without any sort of substance. The characters are goofy and selfish and act only for their own benefit above all else. We’re supposed to like the Warriners at the very least, and while there’s nothing particularly nasty about them, there’s also nothing especially likable. Jerry is a bit of a cad, although a charming one. Lucy is manipulative, although also quite the charmer. The rest of the cast are essentially there to be dumber, sillier, or more vain than our two mains.

The Awful Truth is a difficult film to dislike. Irene Dunne and Cary Grant are simply too good to not be entertaining. But this is also a difficult film to love outright. I suppose if I really think about it, I can say that I enjoyed it, but seeing it once was probably enough for me.

Why to watch The Awful Truth: Because Cary Grant is a suave mo-fo.
Why not to watch: Fluffy, inconsequential people acting like spoiled children.