Goin' to a Show 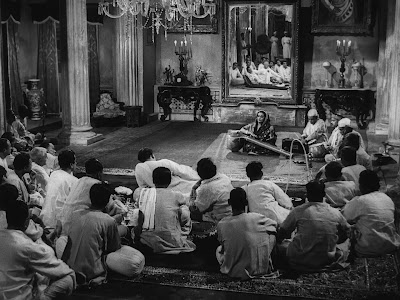 I find it difficult to classify Satyajit Ray’s Jalsaghar as a musical despite the fact that it features a number of musical performances. It’s not a musical in the traditional sense; we don’t get people singing about their feelings or emotions. Instead, the film is based in part around a series of musical performances that are, more or less, staged concerts.

Biswambhar Roy (Chhabi Biswas) is one of the last zamindars in India, a zamindar being the equivalent of a feudal lord. The time of the zamindars is ending, and Roy is suffering financially due to a lack of lands to control. This doesn’t bother him much, and he lives his life as if the money will never stop. His great passion is music, and he frequently hires musicians to come and play in his private music room, inviting other important people in the area to enjoy the concerts. These cost him a great deal—in addition to paying for the entertainment he must pay for refreshments for the guests. It doesn’t trouble him, though.

He is particularly keen to hold more and grander concerts when a neighbor named Mahim Ganguly (Gangapada Basu) begins his own concerts. Ganguly is low-born, the son of a debt collector, but he is fantastically wealthy. Feeling that he cannot be outdone by someone who is essentially a peasant, Roy stages grander concerts, which further bankrupts him.

Things would have gone on like this until he ran out of money, but tragedy strikes. His wife (Padmadevi) and son (Pinaki Sengupta) are killed in an accident while away from the home. This sends Roy into a deep depression. He closes off his music room and becomes something of a recluse, dealing only with his servant (Kali Sarkar) and his house manager (Tulsi Lahiri). At this point, the estate is destitute, struggling along with virtually no money. Roy had already sold off a great many of his possessions to hold concerts earlier, and now has virtually nothing left.

When, years after the tragedy, Ganguly brags that he has discovered a new dancer who performs in an entirely new way, Roy refuses to attend, but then decides to hold another concert, the first in four years. He opens up the music room, breaks out the last of his money, and stages a concert of his own with the new dancer. Everything goes well until the guests leave, and Roy is left alone in his music room. As he watches, the candles around the room begin to sputter and go out, leaving him in darkness. It’s evident at this time that he has become somewhat unhinged from reality, and that the end will be both terrible and inevitable.

Jalsaghar is a small drama, one that encompasses essentially the life of Biswambhar Roy only with little else. It is a drama and not a character study only in that it concentrates more on the events and the concerts than on Roy himself. We learn about Roy’s financial situation only in places and pieces; his wife complains about his spending, but does nothing to make him curb it. His house manager protests his spending, but is unable to prevent it. We learn how desperate the situation is at the end when we are told that he is paying for the final concert with money left as a spiritual offering. We see his need to keep pace with Ganguly when he is assaulted by Ganguly’s recordings of pomp-filled American brass band marches, and the sound of this music coming up to his house visibly pains Roy.

A great deal of the film is spent on the concerts themselves. We see not specifically snippets of performances, although I am certain we never see a full show. But when a performer begins, we see and hear the entire song. Some of them are beautiful and haunting, filled with the droning sound common to much traditional Indian music and featuring an interesting counterpoint in the vocals. One of the songs, sung by an old man, is bizarre in the extreme, though, and to my mind would have been better replaced by almost anything else. But the performances, as much as they feel a bit like dead time in terms of the narrative, are critical to the experience of the film. We are in a very real way as much the guests of Biswambhar Roy as the people on screen. The music is there for our own enjoyment and the concerts are there in many ways to impress us as much as his on-screen guests.

Jalsaghar is a sad, strange little film. Roy’s tragic flaw is that he’s obsessed both with music and with his social position. Unable to maintain the latter, he loses the former as well. It’s a story that could honestly stand a little bit more heft to it—much is glossed over or left fuzzy in service to the music. The music is important enough that it shouldn’t be cut. The film just needs another 15 minutes or so of character and plot development.

Why to watch Jalsaghar: Fantastically performed traditional Indian music.
Why not to watch: The story feels small and could use some expansion.