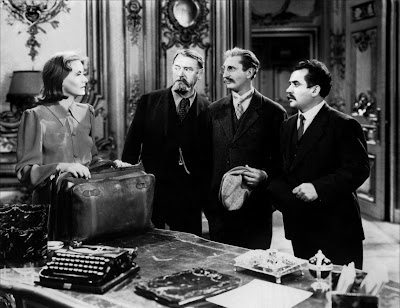 I have discovered that I have a real appreciation for Ernst Lubitsch’s work. He had a style and a quality that most filmmakers past and present seem to lack. There is a touch of class and humanity to Lubitsch’s work as well as moments of sublime comedy. A part of his working philosophy was that even the most dignified person is completely ridiculous at least twice a day. It’s a great observation, and it’s one that informs a great deal of his work, including Ninotchka. (Incidentally, as an Anglophone, it’s disconcerting to type the names “Lubitsch” and “Ninotchka” over and over—all those damn consecutive consonants!)

Anyway, Ninotchka is a love story, and true to form for good ol’ Ernst, it’s a genuine romance. There’s comedy, there’s some intrigue, and there are some characters who are quite a bit more than they appear on the surface. This is a smart film, while it comes from the era of the screwball, it is most definitely not one. Oh, there’s plenty of comedy here, but it’s not of the laugh-out-loud variety. Most of it is subtle, occurring in the margins of the story. It’s the sort of comedy that causes a smile and a knowing nod rather than a knee-slap.

In the aftermath of the Russian Revolution, the new Soviet government is finding that it needs a great deal to start the wheels of progress turning. What it needs more than anything is money. The fastest and best way to raise capital, it is decided, is to sell off a great deal of what was confiscated from the nobility during that fateful October. So it is that three lumbering doofuses named Iranov (Sig Ruman), Buljanov (Felix Bressart), and Kopalsky (Alexander Granach) arrive in Paris. They are there to sell off the jewels of the Grand Duchess Swana (Ina Claire) in the hopes of raising some money to then buy some tractors for the proletariat.

Ah, but Swana lives in Paris where she is attended by Leon d’Algout (Melvyn Douglas), a suave noble with no means of support other than his title and everything it comes with. It’s implied that Leon is romantically involved with Grand Duchess Swana, who gives every appearance of being flighty and completely self-absorbed. As we discover through the course of the film, only one of those things is true. When Swana learns from a loyal former Russian-turned-hotel waiter thather jewels have arrived in Paris, she sets Leon after them, and he swings into gear.

Things start to change when, after some time, nothing has happened on the whole selling of the jewels front. Enter Nina Ivanova “Ninotchka” Yakushova (Greta Garbo). Mirthless, humorless, and utterly dour, she arrives to whip the three Soviet stooges into shape and return to Moscow with the moolah. What she didn’t count on was a chance encounter with that same Leon d’Algout, who immediately falls for her beauty and spends his time attempting to thaw her evident emotional permafrost.

Eventually, and you knew it had to happen, Leon gets Ninotchka to lighten up a bit and she starts to enjoy herself. More importantly, she begins to see that there is quite a bit more in the world than May Day parades, productivity reports, and shilling for her government. And so she falls hard for Leon, and in the back of her mind, wishes for there to be a way to prolong her stay in Paris, if only so she can continue to drink champagne and spend time with Leon. Of course, jealousy rears its ugly head, and we learn that Grand Duchess Swana may well be completely self-absorbed, but that she is also a woman who hides a quick wit and surprising intelligence behind her seemingly trivial conversation. Ninotchka is forced to make a difficult choice—stay in Paris, bleeding the Soviet treasury and allowing the workers to starve while the ownership of the jewels is contested or leave for Moscow immediately with the money in tow, but Leon d’Algout left behind.

What I appreciated most about this film is its subtlety. There are a number of excellent jokes and one-liners tossed out with almost no fanfare or follow up comment. For someone less aware, much of this might not even come across as a joke, but merely part of the conversation. However, when she arrives in Paris and tells the three bumbling negotiators that the latest round of mass trials were successful because there will be fewer but better Russians, it’s impossible not to see this as a snide attack on Stalin’s policies, and it’s difficult to suppress a grin. There’s a similar reaction when Leon comments that he’s been interested in the Soviet five-year plan for the last fifteen years.

In addition to this, a great deal of the more romantic dialogue is truly romantic and not the sort of script pabulum that gets passed off in a lot of rom-coms. At midnight on their first evening together, Leon mentions that the hands of the clock have met and when they meet, they kiss. It’s a lovely image, and an original spin on something that could have been trite and just so much more blathering.

For her first real comedy, Garbo is funny for the first half. It’s precisely when she is acting as an emotionless emissary of Russia that she is at her funniest in the film. Her comments are sharp and her delivery toneless, almost robotic. It’s pitch perfect for the effect that Lubitsch is attempting to create. Once she loosens up, she becomes a character in a romance, and she’s less humorous, but no less entertaining. And there are moments—wanting to make a speech to her new French comrades after her first glass of champagne is rather endearing, and almost adorkable.

In short, surprise, surprise, I liked this one. The romance is real, and the comedy is genuine, and in most movies that claim to have both, both are in short supply. But not here. Ninotchka is a charmer, and well worth your time.

Why to watch Ninotchka: Because Garbo laughs, dammit!
Why not to watch: If you don’t know how it ends after 30 minutes, you aren’t really watching.