So, When's the Justice League Movie? 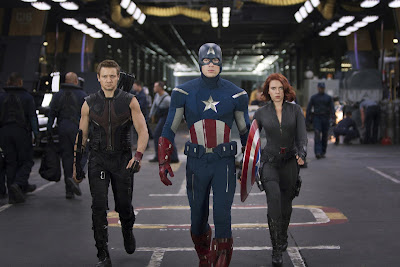 Like the good nerd that I am, I tend to see a lot of the superhero-type movies in the theater. I miss a lot, too—I still haven’t seen Captain America, for instance. But I tend to see them all eventually. Because I see them all eventually, I’ve seen all of them except the aforementioned Captain America leading up to The Avengers. Yes, even the shitty first attempt of Hulk. So, this film has been building for years, and it’s finally here and has broken every box office record in existence. No surprise there. But is it any good?

Yeah, it is. It’s not as good as it could be, but it’s pretty damn good.

A group of people (we learn later that this is S.H.I.E.L.D.) is working on some sort of new energy source with something called the tesseract, which evidently popped up in the one film I haven’t seen. Anyway, it starts going nutty, and since it’s essentially a door to the other side of the universe, this can be a real problem. It opens up and out pops Loki (Tom Hiddleston). He steals the thing and makes potential Avenger Clint Barton/Hawkeye (Jeremy Renner) his mind-controlled servant for good measure.

So we spend the next chunk of the film doing the whole “Avengers Assemble” thing where we’re introduced to the rest of the team. Masterminding all of this is Nick Fury (Samuel L. Jackson). Using agent Romanoff/Black Widow (Scarlett Johansson) for some of his acquisitions and Agent Coulson (Clark Gregg) for others, he brings in Tony Stark/Iron Man (Robert Downey, Jr.), Bruce Banner/Hulk (Mark Ruffalo), Steve Rogers/Captain America (Chris Evans), and somehow manages to acquire the services of Thor (Chris Hemsworth), who is a semi-divine extraterrestrial.

Anyway, it soon becomes evident that Loki’s plan is to use the tesseract to open up a doorway to the far side of the universe so an alien race can pop on over and basically destroy humanity. I’m not really sure what this does for Loki, or why the aliens want to kill everyone. It’s not really explained. Evidently, Loki wants to rule Earth, but he seems to have forgotten the part where the aliens are going to show up and destroy the place. Kind of silly, really, but I’m not keeping score that carefully.

Anyway, it proceeds in much the way you think it will. The heroes get together and there are huge personality clashes and everything goes to hell. Then the entire world is put into critical jeopardy and the heroes have to figure out a way to work together. Along the way, there is property damage and explosions of near-Biblical proportions. Seriously, this is not something that could have been filmed a few years ago—there are buildings falling over in Manhattan, and I’m fairly certain that some portion of the audience for this film is thinking that it’s still too soon.

Anyway, the last major chunk of the film is the alien invasion and the response to it, plus the big fight against Loki. Really, this is what virtually everyone in the theater paid for. The momenst of humor are fine, the quieter moments are dandy, but what we really want and what I certainly paid for tonight was a good half hour of solid ass kicking, and that’s what I got.

The Avengers is not a perfect film, though, and I’m preparing myself for the inevitable fanboy backlash for saying that. But it’s not. Whedon is an excellent writer and a dedicated fan, which is in his favor in a film like this. He knows these characters, and he’s enough of a fanboy himself that he knows what the fans really want. But he still hasn’t really figured out how to film close combat. While many of the action scenes look great, several—particularly one-on-one fist fights—are spotty and confusing, with no clear shot for the audience of what is happening. It’s a complaint I have in many films of this type. I want to see the damn action, not brightly colored flashes of costume moving quickly. I’d love to have someone film the action sequences as if this were a martial arts movie so that we in the audience can actually see the fight choreography. For a film of this type and stature, the action sequences are critically important, and not all of them work here.

My other complaints are more or less nitpicks. The first time we see the Hulk transformation, for instance, it is a long and painful process. The second time, it just happens, almost immediately, mostly so that Whedon could work in a line just before the transformation is needed. There’s no explanation for this—we’ve already established that it takes longer. So evidently the painful transformation is…elective? We see a board of directors for S.H.I.E.L.D. planning to nuke Manhattan…with no real indication that it will do anything. Huh?

But no matter. The Avengers is the sort of fun, big budget spectacle that summer movies are all about. It doesn’t have to make complete sense all the way through. It doesn’t have to sit solidly upon all of the various movies that have come before it. I went to see things explode and watch the Hulk punch things. That’s what I got. Ultimately, I’m pretty happy with that.

Why to watch The Avengers: Because it’s The Avengers.
Why not to watch: Not everything jibes perfectly.