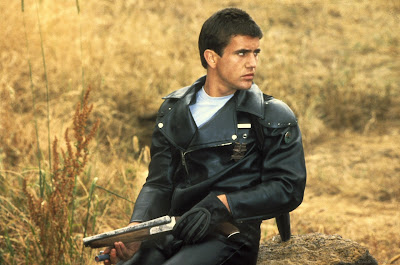 When I was far too young to see it, I saw The Road Warrior in the theater, and it rapidly became one of my favorite films. It may well have been the first ever VHS I ever bought. I didn’t see the first film, Mad Max for quite some time, and when I did, I saw the version with the dialogue “cleaned up” for an American audience, since, it was alleged, Americans were unable to understand the thick Australian accents of the original film. I’ve seen both films probably half a dozen times, but tonight was the first time in ages I’d seen Mad Max.

The most interesting thing to me about this film is not the cars (which are cool) or the revenge angle (which is a bit predictable and melodramatic), but the slow burn of society breaking down throughout the film. Most of the time, when we get a film that shows us the apocalypse, it’s a sudden thing—zombies crawling out of their graves, for instance, or an attack by aliens looking to destroy our world. This film is different. Here, the destruction of society comes not from outside forces or cataclysm but from slow decay and rot from the inside. Society in this film breaks down in pieces, not all at once, and this decline is what makes the film work more than anything else.

Our focus is on a group of what are essentially highway patrol officers in Australia attempting to keep some sort of peace out in the world. The highways, particularly the more or less untraveled ones, have become places of lawlessness. Even the police aren’t so much about preventing or deterring crime, but about punishing it whenever possible, and they aren’t always successful at this. The best of these is Max Rockatansky(Mel Gibson), who drives the pursuit car. Max is married to Jess (Joanne Samuel), and the two of them have a son. Naturally, Jess isn’t in love with Max’s career. On the force, Max works under a guy who goes by Fifi (Roger Ward) and works with his friend Goose (Steve Bisley), who prefers a motorcycle to a car.

Arrayed against them is a host of crazies. The first of these we encounter is a cop killer who calls himself the Nightrider (Vince Gil), who manages to knock out a couple of cops during the chase, but who is eventually forced into an explosive accident by Max. Now, the Nightrider’s gang of friends, led by Toecutter (Hugh Keays-Byrne) and assisted in part by Johnny the Boy (Tim Burns) decides to gun after Max, Goose, and anyone else they can.

This is what the second act trades on—the unraveling of Max’s life. When Goose is burned beyond recognition by Toecutter and Johnny, Max decides to quit, but is given a vacation instead. Of course, this isn’t going to go well. To set up the third act, something bad needs to happen, and happen it does. Max’s family is ridden down by the gang, wife and son killed by Toecutter and his gang of thugs. This sets up our third act where Max goes after the gang that killed his family and seeks the sort of revenge suitable only in the darkest of fantasies and action films.

There is a specific, B-movie, grindhouse vibe to this film that is impossible to ignore. Mad Max plays like a film made on a shoestring budget, and considering that its estimated $300,000 is all director George Miller had, there’s a reason for this. Despite the low budget, the stunts are actually quite good throughout—we get some excellent high speed car chases and some real quality crashes, which only add to the grindhouse feel of the film.

Mad Max is a simple film, one that doesn’t look to make much of a statement on the surface. It’s more or less a revenge picture in which the revenge doesn’t really take place until the final act. However, that’s just on the surface. It’s actually a surprisingly deep film that looks at the subtle ways that society can (and does) breakdown, leading to the inevitable anarchy out on the roads. We see an excellent example of this when Johnny the Boy is brought into custody and is then released because no one—not a single witness for either side—shows up for the trial. Fear becomes the controlling interest of everyone, and the police are slowly and inevitably overwhelmed. This isn’t a rare idea; it’s one that is played with well in a film like RoboCop, for instance. Here, though, there is no magic answer of a super officer to take out the criminal element.

In fact, one of the driving aspects of Mad Max is just how bleak it is. We don’t see what happens to Max in this film after he takes his revenge—we see it in the next one. In that next film, the Max we are left with is nothing but a shell of his former self. Here, there’s no joy and not much satisfaction in the revenge; there is only duty, a sense that this is something that simply must be done.

I still think that The Road Warrior is a superior film in almost all ways. What it lacks, though, is what Mad Max provides—the view of societal breakdown that leads in a direct line to the post-apocalyptic anarchy of the subsequent film. This film is very much a warning of things to come. It just happens to be a warning with kick-ass action sequences and a very young Mel Gibson at the beginning of his career.

Why to watch Mad Max: It’s gutsy filmmaking, and probably better than you remember.
Why not to watch: Because The Road Warrior is better.