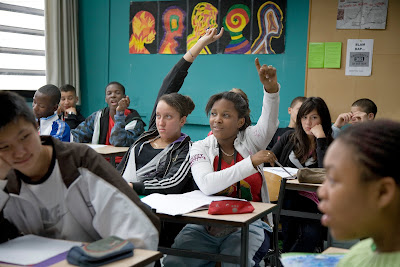 I have watched a lot of movies in my lifetime. There are movies that I have loved, movies that I have hated, and movies that have bothered me on a deep level. But until tonight, I have never seen a movie that flat out pissed me off as much as Entre les Murs (The Class). I’ll be blunt here: I had to actively force myself to continue watching this after the first half hour, and the film runs somewhat longer than two.

I’ll make this short: the film takes place in a school in France. I’m not really sure of the level. The kids are in their middle teens, but they talk about eventually going to high school. Perhaps the French system is different. I’m not really sure. Anyway, the film tends to focus on the French teacher, Francois Marin (Francois Begaudeau). More specifically, it focuses on one specific class of his, which appears to have about 8,000 students.

While there are a lot of personalities in the room, we tend to focus on just a few of them. One, Esmeralda (Esmeralda Ouertani) likes to talk and likes to cause a lot of trouble. Another, Souleymane (Franck Keita) refuses to do most of his classwork, rebels in all his classes, but appears to have a brain working underneath it all. We also have Khoumba (Rachel Regulier) who bristles every time she is asked to do anything in class. Francois deals with almost constant interruptions and constant chatter from everyone, and doesn’t seem to manage to get anything done.

For a bit, it appears that he might be getting through to the students. He seems to develop something of a relationship with them, and while they are frequently disruptive, at least they seem to be learning something. He has them all write self-portraits, and all of them at least attempt it except for Souleymane, who refuses. Instead, Francois allows Souleymane to create his as a set of pictures he has taken, and it seems like we’re getting somewhere.

At one point, though, a fight breaks out in the classroom and naturally, it is Souleymane who is eventually at the center. Stomping out of the room without permission, he smacks Khoumba across the face with his backpack, splitting open her eyebrow. Naturally, this leads to expulsion from the school despite the fact that this probably means that the boy will be sent back to his native Mali by his over-strict father. And then it’s the end of the year and the film ends. Esmeralda, who goes through the entire movie needing to be punched in the teeth, claims that she didn’t learn anything.

As a teacher, I know these students, or at least some of them. Seeing them depicted on a screen in front of me doesn’t do anything to improve my mood. In general, these kids are snotty, ignorant, and self-assured enough to believe that they are always correct, that their education is worthless, and that everything around them is equally worthless. They are arrogant, mouthy, disrespectful, and similarly immediately demanding of complete respect from everyone else. They act and talk with the sort of impunity that leads me to believe that in the 13 or 14 years preceding this film, these characters have never been corrected on a single thing in their lives. I know for a fact these people exist. I’ve seen them, had them in my classroom, and seen them at times when I have guest lectured. I’ve just never seen them depicted as something worth celebrating. And that, more than anything, pisses me off. Filmmaker Laurent Cantet appears to have not a single problem with the almost singular entitlement of virtually every person in this film, because except for Souleymane, nothing happens to anyone.

Beyond this, the film is remarkably disjointed. We learn at one point that a Chinese student named Wei (Wei Huang) may lose his mother to deportation because she is in the country illegally. A big to-do is made of this for about 10 minutes, then a teacher announces that she is pregnant. Neither of these topics or plot threads or whatever else you want to call them shows up again. It’s like they never happened.

Why to watch Entre les Murs: You find you need a better reason to show respect for teachers.
Why not to watch: Because people suck, and kids more than most.