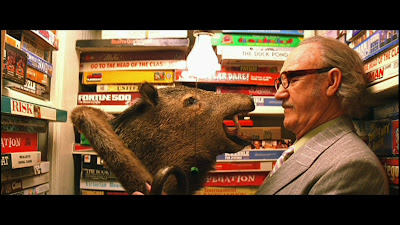 Wes Anderson makes strange movies. I’m not saying something that hasn’t been said many times before. Anderson’s movies concern extreme characters, people who exist on the fringe of rationality, sanity, and believability. The Royal Tenenbaums is different from this only in the sense that it concerns the lives of more than half a dozen such characters rather than two or three.

We are introduced to the Tenenbaums through a narrator (Alec Baldwin), who tells us of the early life of the family. Royal Tenenbaum (Gene Hackman) and his wife Etheline (Anjelica Huston) have three children, each of whom is a prodigy in a particular way. Richie (Luke Wilson) is an accomplished tennis player, going pro at 17. Adopted sister Margot (Gweneth Paltrow) is a playwright, receiving a grant in the 9th grade. Youngest child Chaz (Ben Stiller) starts a corporation as a minor and begins making money in real estate. None of this prevents the eventual separation of the parents, and Etheline takes it upon herself to raise the three children. We’re also introduced to Eli Cash (Owen Wilson), a young boy who lives across the street, but grows up in the Tenenbaum home.

After this introduction, we are brought to the present day and discover that the promise of the children has not blossomed for various reasons. Margot has not written a line in years, Richie suffered a serious breakdown during a match and gave up competitive play. Chaz, who is still apparently succeeding in business, suffered a personal loss when his wife was killed in a plane crash. This has made him significantly overprotective of his two sons, Ari (Grant Rosenmeyer) and Uzi (Jonah Meyerson).

Everything comes to a head at the same time. Royal is kicked out of his hotel because he hasn’t paid his bill in months. Around this time, his friend Pagoda (Kumar Pallana), who works at the Tenenbaum home, learns that Etheline’s accountant Henry Sherman (Danny Glover) has proposed to her. Since Royal never divorced her, it presents her with a problem, and Royal becomes determined to stand in the way of the proposed marriage. We also learn of a few strange relationships and quirks. Chaz returns to the family home with his sons after deciding they are no longer safe in their own apartment. Richie confesses to friend Eli that he is in love with his adopted sister. Margot, depressed for any number of reasons, spends her time locked in the bathroom and away from her husband, Raleigh St. Claire (Bill Murray).

In an effort to prevent his wife’s remarriage and to win back the love of his children—and because he has no place to live—Royal moves back into the family home by pretending to have a fatal illness, assisted by Pagoda and his friend Dusty (Seymour Cassel). This, more than anything, is the concern of the film. Rather than a coming of age story, this is a story of a sort of rebirth. Royal, who has spent his entire life as a scam artist, cheat, and abusive personality, attempts to con his family back, and then discovers that he needs to pay a certain amount of dues to get where he wants to be.

As I said at the start, Anderson’s movies are concerned with the odd and offbeat characters, and the cast here is no different than his other films. Each of the characters we are presented with here are bizarre and strange. It says something that Raleigh’s current subject of study—a boy named Dudley (Stephen Lea Sheppard) who exhibits symptoms of amnesia, dyslexia, and color-blindness—doesn’t seem out of place with the rest of the people here. He’s perhaps a bit stranger, but not so strange as to not fit in in his own way.

I like The Royal Tenenbaums in part because of just how strange it is. The characters, while not specifically the sort of people I’d like to hang around with for too long, are fascinating and compelling. The film is less about plot than it is about the intertwined lives of these people and specifically what happened to make the three Tenenbaum kids fall from their lofty perches of prodigy-hood to lives of wasted potential.

And the characters are what sell the film to me. All of these characters, or at least most of them, could just as easily work in a film of a smaller or different scope. Most of them would work as a featured character rather than as part of a larger ensemble, and yet here, each one needs the others to find his or her place in the whole group. The characters are in many ways defined by their quirks, but they are also defined by each other and the relationships they have with each other.

Because the film is so extreme, it’s easy for me to understand why many people wouldn’t like it. It contains a strange charm, though, and the stories of these characters spinning around each other makes for a film that is endlessly fascinating. Still, because of its inherent strangeness, it would not surprise me if many were put off by it.

But, even for those who are driven crazy by the caricatures of the people involved, the acting from all parties is top notch. I say this as someone who can generally take or leave Ben Stiller and Owen Wilson in general—here, I love their performances and the unique flavor they give to their characters. This is true for all, in fact. Gene Hackman is always worth watching, and Royal Tenenbaum is played so well that nothing he does, says, or attempts is at all surprising, no matter how brash or ridiculous.

I tend to like Wes Anderson, but I don’t like his other films nearly as much as I like this one. The 110 minute running time is a good length, but I wouldn’t have complained for another half hour spent in the company of these odd and oddly wonderful people.

Why to watch The Royal Tenenbaums: Wes Anderson at the height of his quirky power.
Why not to watch: It’s pretty damn weird.