A Man and His Dog 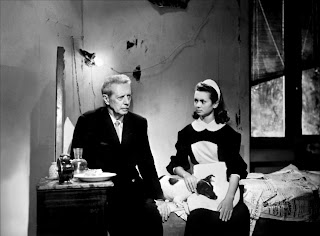 What can I say about Vittorio de Sica that I haven’t already said before? He made slice-of-life films about the poor and downtrodden being poor and downtrodden and seemed to love to cut the hearts out of his main characters and his audience. Ladri di Biciclette is one of the most gutting experiences I’ve had watching a film. I was braced for something similar when it came to Umberto D., a film that I’d been warned about. I expected it to be a great film and one that would absolutely tear my heart out. Yes and yes.

Our main character is the eponymous Umberto Domenico Ferrari (Carlo Battisti), an old pensioner who spent his life working for the government. As the film begins, Umberto is protesting for a raise in his pension along with a number of old men. While it seems that many of them simply want more money, Umberto needs the raise to make ends meet and pay off his debts. The small pension he gets is not nearly enough for him to live on, and he owes his landlady(Lina Gennari) a great deal of back rent, which causes her to threaten to evict him.

In fact, unknown to Umberto until he comes home this time, his room has been rented by the hour to a couple who needs it for a little quality private time, which means that couples are doing the nasty on Umberto’s bed when he’s out, which is just wrong. It is here that we meet one of Umberto’s only real friends in the world. This is Maria (Maria Pia Casilio), the serving maid at his boarding house. Maria genuinely likes Umberto and helps take care of him when he is sick. She reveals to him that she has two boyfriends and that one of them has gotten her pregnant. This she needs to hide as best she can, because once her employer finds out, she knows she will be kicked out of the house. Umberto’s other friend is Flike, his dog and constant companion. That night, Umberto attempts to raise some of the money he owes his landlady by selling one of his watches and some books, but raises only a third. She refuses the payment unless he can come up with all of the money at once. When he becomes ill and goes to the hospital, she takes advantage of the situation and sends in workmen to knock down the wall of his room to turn it into an enlarged living area. While in the hospital, Umberto charges Maria to look after Flike, but the dog runs away.

Eventually, Umberto is released from the hospital and finds that his eviction is a real thing and that his dog is missing. In one of the only genuinely happy moments of the film, he goes to the pound and finds Flike. Now desperate and with nowhere to go, Umberto trains Flike to beg for him, which he does until Umberto runs into a friend. Ashamed of his situation, he leaves, and determines that the only course left open to him is to take his own life. The safety and continued health of Flike becomes his only concern before deciding to end it all, and this takes up the final act of the film.

So, yeah, it’s a gut punch. It actually manages to end on as much of an uptick as it can given the story and the situation, and while it’s not a total wrist-slitter, this is not a film I’d plan on showing someone going through an episode of depression. Umberto’s life has become a struggle for mere survival, and he lives at the whim of people who don’t like him, care about him, or notice him. Those who do are powerless to help him in any way. In many ways, what he has become is the greatest fear of many: he has outlived his usefulness and means nothing to anyone save Maria and Flike. Of all the many qualities he may have had in his life, by the time we come to the end, all he has left is just enough dignity to make him feel guilty for becoming a beggar. Oh, we find there’s a little more lurking down there, too, something that didn’t quite escape when the Pandora’s Box of Umberto’s troubles are released. And that little glimmer is nice, but not enough to make this an uplifting film or a triumph of the human spirit.

I realize that this sounds like I didn’t like Umberto D., and that’s the wrong impression. This is a beautiful film and perfectly made. Carlo Battisti is perfectly cast and believable as an old man who has come to the end of his tether and is desperately trying to hang on for one more day. If there’s a weak point, it’s Maria Pia Casilio, who is sometimes wooden in her line delivery, and whose face never really shows any expression.

This is a film that requires the right mood, since it’s a huge bring-down. Don’t watch it if you’re already in a place where the world seems black and dreary. Or maybe that’s the right time. Maybe that slight little boost at the end is all you need to pick yourself up and get moving again. Me? Not so much. I’d save this for a time when I’m mentally prepared to be emotionally flensed.

Why to watch Umberto D.: A human story of pain, suffering, and a life over despite not being quite over.
Why not to watch: You may want to jump out a window.