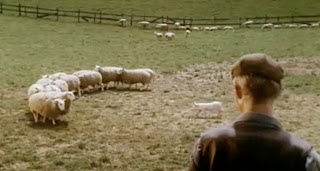 I was a hard sell on Babe. Seriously, I had no real desire to watch a movie about a talking pig the first time I became aware of it. I’m still a little bit in denial that Babe was nominated for seven Oscars including Best Picture. It’s a feel-good choice, I suppose, but I can’t imagine it got a lot of votes. Oh, don’t get me wrong; I’m a convert. I like the little pig. I liked it the first time I saw it, and I liked it again tonight, watching it with the girls while coloring Easter eggs. Babe, both the movie and the pig, is insufferably cute, and I mean that in a good way. It’s a great family film—entertaining for kids and adults, and that’s something pretty rare in the world.

Babe the pig (voiced by Christine Cavanaugh) is won by farmer Arthur Hoggett (James Cromwell) at a county fair, a nice prize for a farmer who is so old school he still uses a horse and wagon. The Hoggett farm is sort of hemorrhaging money in no small part because Hoggett and his wife Esme (Magda Szubanski) refuse to modernize in any way. The pig, of course, is there to be eaten eventually, as Mrs. Hoggett has dreams of a nice Christmas ham. Farmer Hoggett, though, sees something special in the pig when Babe helps defend the sheep against thieves and wild dogs.

Babe is adopted by the farm animals, in particular by the border collie Fly (voiced by Miriam Margolyes) and is immediately resented by sheepdog Rex (voiced by Hugo Weaving). Babe doesn’t understand why the dogs are so mean to the sheep. In fact, Babe discovers that speaking kindly to the sheep and requesting that they do things for him works quite a bit better. Babe becomes so good at dealing with the sheep, in fact, that Hoggett decides to buck all convention and enter the little big in the local sheepdog trials despite the fact that Babe is hardly a sheepdog.

Typically, I’d have a problem with the linear nature of the plot. There isn’t a great deal of rising tension. A problem appears, it gets resolved, we move on. For instance, when Christmas does roll around, the decision comes down to the pig or a duck. A duck gets the chop and Babe lives on. When due to circumstances Hoggett thinks Babe has killed a sheep, the situation gets resolved in a minute or two, and we move on again. This would normally be a problem, but this sort of structure fits beautifully in a family movie like this one. It never gets complicated for the kids and it’s always simple to follow.

That, really, is one of the great selling points of the film. Babe (evidently played by multiple pigs that looked identical) is a ridiculously cute little animal, instantly charming to just about anyone who sees it. Little kids will be entranced by it even if they don’t really follow all of the plot points. They’ll also find real tension in the moments when it looks like Babe might get the chop and end up on a dinner plate, even if the adults know that’s not going to happen. For the adults, it’s heartwarming and cute—perhaps a bit too cute, but then again, maybe not. It’s endearing, and that’s not a word I toss out too often or very lightly.

If I have an objection here, it’s that animals always look so strange to me when they are given human speech in films, especially when (as here) they are given something approaching human lip movements to coincide with the speech. It looks off and very strange, and there’s something a little off-putting about it to my mind. But this is a very small consideration, and after a few minutes, I stopped noticing it and just went with it.

The proof that this is a family film is in the watching of it. As mentioned above, we dyed Easter eggs tonight and ran the film. Once the eggs were done, no one moved. Both of my girls (ages 14 and 10) were wrapped up in it. My wife enjoyed this rewatch of the film, and so did I. No one thought it was stupid or silly or trite. That’s a rare thing for a film like this, because it could very easily be all three. No, Babe is genuinely sweet and entertaining. It’s seriously good-natured and happy. Certainly there are people who will find it beneath them to be charmed by it, but I’m happy to say that I’m not one of them.

Just as important here is that the moral of the film is a good one. In part, it’s about the idea of not judging a book by its cover, which tends to be a common theme in family entertainment. It’s about more than that, though. It’s about believing in something because it’s the right thing to think. It’s about trust, about love, and about common consideration. There’s damn little of that in the world most of the time. We could all do with a bit more.

Why to watch Babe: It’s the cutest thing ever.
Why not to watch: Talking animals are a little bit creepy.