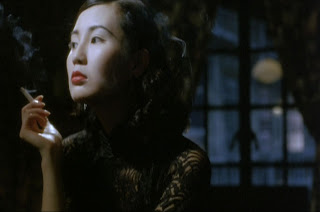 Every now and then I watch a film that I’m sure how to react to. Yuen Ling-yuk (which has a couple of dozen other names: Ruan Lingyu; Center Stage; Centre Stage; The Actress) is one such film. It’s an oddball of a movie, that feels like it doesn’t know what it wants to be, although it does. It’s brilliantly acted and filmed, unique in a number of ways, and I found a great deal to like here. I’m just not completely certain what I actually have to say about it. Bear with me; this might ramble a bit or go massively off-topic. You’ve been warned.

Yuen Ling-yuk) is in some ways a documentary about itself. It is also a biopic of the actress Ruan Ling-yu (Maggie Cheung). Ruan began acting at 16, starred in a number of films (about six of which survive), and took her own life at 24. The film is in part an exploration of what led to the suicide. It is also in part an discussion of the film itself by the actors and the director, Stanley Kwan. Frequently, we see scenes from Ruan’s life, and then the cast discusses what they think may have really happened or watches current footage of people who knew Ruan in the 1930s.

It’s a complicated film because it frequently moves from the biopic to behind-the-scenes footage of the filming of the biopic. When possible, it shows a recreation of particular important scenes from Ruan’s career then shows the actual film. Many of the films from her career are now gone, with no copies surviving, making these recreations as close as we will get to seeing much of Ruan’s early work.

It is, as might be expected from a story that ends with a suicide at 24, incredibly tragic. Ruan’s personal life was difficult and complicated, and she was evidently seen as something of a prize by a number of men who publically fought over her. She was followed constantly by scandal which impacted her career. Of more critical impact on her film career was the Japanese invasion of China and the rise of communism. Later in her career, Ruan favored somewhat progressive and rebellious roles, many of which were summarily cut down or edited to be considered suitable for release in the political climate of a China in flux.

Yuen Ling-yuk is a completely compelling film. By far the most compelling part of the film, at least for me, is Maggie Cheung, both in her role as Ruan and as herself discussing the role and the film. She comments early on that she finds a number of parallels between herself and Ruan, although it’s worth noting that she was already four years older than Ruan when the film was made.

In the end, we have only Ruan’s films and what she left behind as a guide for why she killed herself at the height of her fame and skill as an actress. It is this fact that makes the story even more compelling. While Ruan was called the Chinese Garbo, her story of an early death in the midst of massive success seems to follow someone like Valentino and be followed by James Dean, Heath Ledger, Marilyn Monroe, and many others.

So we have a beautifully made film, skillfully acted and filmed, and made with a great deal of compassion for its subject. And I feel like I’ve run out of things to say about it. It touches briefly on the political, but doesn’t dwell on it, and doesn’t place political considerations in the middle of the story. In this respect, it isn’t much of a guide to early 1930s China or the pre-war years. It deals with Ruan’s life as a famous woman, but doesn’t say a great deal about Chinese society of the time. No, instead Yuen Ling-yuk is focused entirely on Ruan, on the reflections about her, and on Cheung’s portrayal of her.

If I am reminded of anything, I most recall a film like LaVie en Rose, which may well have been influenced by this. I’m also reminded of American Splendor with its frequent switches between the film world and the world behind the camera.

So, while I may be a bit tongue-tied on what to say about Yuen Ling-yuk, I’m also saying that the time spent with this one is completely worth it, if only to see just how good Maggie Cheung really is.

Why to watch Yuen Ling-yuk: Maggie Cheung is always worth watching, especially here.
Why not to watch: For as good as it is, it doesn’t leave a massive impression.