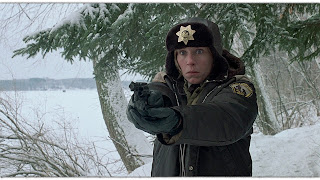 In Fargo, Frances McDormand plays the seven month pregnant police chief of Brainerd, MN, Marge Gunderson. I say with absolutely no shame (and knowing that almost everyone who reads this will agree with me) that Marge Gunderson is one of my absolute, all-time favorite film characters. I could seriously watch her all day. There’s a part of me that’s sad that Margie only appeared in a single film, and a part of me that rejoices at this, since the character never got the opportunity to become stale and silly. No, Marge is great where she is, forever pregnant, forever looking like a rube on the surface, and forever being a damn fine police officer.

The marvelous thing about Fargo is that it excels in two of the most important aspects of any film. First, it has a great story. It’s complicated enough to be interesting, but simple enough to follow easily on a first watch. Things get complex in stages, and each stage makes a certain amount of sense. We don’t go into exhaustive and unnecessary details; we get what we need to follow along and make sense of the events that unfold. And since this is a movie that involves any number of shady deals, underhanded actions, betrayals and criminal acts, it’s naturally interesting.

Second, and I’d argue more critical to the ultimate success of the film, Fargo gives life to some truly wonderful characters. Marge is merely the best of them, but not in any respect the only character here worth seeing. The characters here are real people. They’re not perfect. They have realistic quirks. They talk like real people (or at least real people from Minnesota). These are more than simply movie characters. There’s a real sense that they have lived lives and have a history. It’s a tremendously rare thing.

I should mention the actual plot here. Car salesman Jerry Lundegaard (William H. Macy) is in deep financial trouble of an undisclosed nature. He’s taken out a massive loan on a number of cars that he doesn’t actually possess. Desperate for cash, he arranges a plan to have his wife Jean (Kristin Rudrud) kidnapped, with plans to get the ransom from her wealthy father, Wade Gustafson (Harve Presnell) His kidnappers are the talkative and excited Carl Showalter (Steve Buscemi) and the taciturn and almost emotionless Gaear Grimsrud (Peter Stormare). Jerry is hopeful that a real estate deal might give him the necessary cash, but that falls through, so the kidnapping goes as planned. His hope is to give the kidnappers $40,000 of the ransom and keep $960,000 to pay off his outstanding debts.

The kidnapping goes awry when Carl and Gaear are pulled over on the highway for driving a car with dealer plates and no evident license. Since Jean Lundegaard is in the back seat, Gaear takes control of the situation by killing the cop and then hunting down and killing two passers-by who saw everything. This triple homicide brings us the involvement of Marge Gunderson, who truly makes this entire film work. Yeah, I know I’m gushing a little bit, but again, Marge Gunderson and her husband Norm (John Carroll Lynch) are a pleasure to see on the screen.

So what makes Marge work so well? It’s that she’s been treated as a real person when it would have been incredibly simple to make her into a caricature. In fact, that’s one of the real joys of seeing this film for the first time. When Marge does appear, she has all of the mannerisms we might expect with a mildly dippy hausfrau. And then we get the chance to see her on the crime scene, and our estimation of her changes immediately. Based on the layout of the scene where the two passers-by were killed, Marge looks around, sees the bodies and the layout, and immediately pieces together what we just saw logically and accurately. And then she takes a moment to prevent herself from throwing up due to morning sickness. It’s great, because we immediately buy into her as a person. She’s suddenly real, and while there’s still a temptation to think of her as a rube because of her accent, we can’t deny that she’s smart and a really good cop.

One of the other pleasures of a film like Fargo is that it was created in the expert hands of the Coen Brothers, who aren’t in the business of making bad films. Fargo blends their two styles. There are genuine comic moments here that are as funny as anything in a film like Raising Arizona, but the film as a whole isn’t a comedy, and the crimes that are committed are really pretty terrible. It’s also evident that Gaear Grimsrud is sort of the precursor to what would eventually become Anton Chigurh from No Country for Old Men.

It had been several years since I’d seen Fargo, and it’s as good now as it was the last time I saw it. Even better, it’s as good now as the first time I saw it. Films like this one, nearly perfect in every respect, don’t come along very often. I’d forgotten just how good it is and how much I enjoy it. It’s one to put back into rotation more often—I shouldn’t go four or five years without spending time with Marge again.

Why to watch Fargo: It’s pretty much perfect start to finish.
Why not to watch: You’re an idiot.