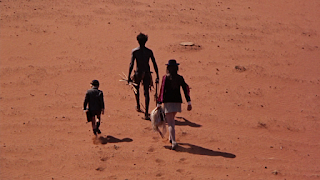 I haven’t ever attacked the watching of this list of films with much of a plan, or at least without much of a plan that’s looked more than a week or so ahead. I’ve tried to watch films from all genres and from all decades pretty consistently. I’ve also sort of kept track of the films I’m really interested in seeing and the ones that I dread. For the last three years, I’ve done my best to ration the films that really interest me and to force myself to do a couple of the scarier ones every month. The fact that I’ve disliked four of the last seven and want a better print of a fifth means it’s time for one I’ve been looking forward to seeing.

Walkabout is a story unlike any that I have seen. A man (John Meillon) takes his daughter (Jenny Agutter) and son (Luc Roeg, son of director Nicolas Roeg) for a drive out into the Australian Outback, driving into the heart of nowhere until the car is virtually out of gas. As his daughter puts together a picnic lunch, he consults what looks like geological information about the area. Then, quite suddenly, he pulls out a gun and attempts to kill his children. The kids run off, and he sets fire to the care and shoots himself in the head, leaving his children alone and in the middle of nowhere.

The two spend a couple of miserable days, with her keeping her brother from the full knowledge of what their father has done. They wander through the Outback, surviving on the food she managed to scavenge and water as they can find it. Eventually, the meet a young Aborigine (David Gulpilil) out on his walkabout—a time of forced separation from his tribe where he must fend for himself off the land.

It’s quickly evident that there is no common language, but through mime, the white kids able to communicate what they want, and the Aborigine takes them under his protection, showing them how to find water, and giving them food that he has hunted. As the travel, the two boys work out a system of communication that works for them. The trio passes signs of civilization but don’t seem to notice, while their guide evidently never fully understands that the two are trying to get back to their own world.

There’s a great deal of unspoken sexual tension in the film that we become privy to simply by watching what happens between the two relevant (and forever unnamed) characters. He, certainly, is attracted to her, not in the least because he catches her unclothed and getting dressed at one point. This attraction, perhaps still forbidden in 1970s Australia, is the ultimate reason for the shocking climax of the film, one that will distress anyone who sees it.

Roeg’s film is about much more than this sexual tension, though, and the climax of the film is about more than a reaction to this frustration. There is a great deal going on here below the surface and never really spoken, but implied through the use of particular images throughout. Frequently, Roeg cuts to extreme close-ups of wildlife, and specifically not the cute and fuzzy wallabies and kangaroos we might expect. We get scorpions and insects, and masses of maggots swarming on a corpse. There is a definite and specific connection made between the lives of the Aborigines and the lives of the white Australians. There are montages of David Gulpilil butchering a kangaroo he has hunted cut with shots of a butcher hacking apart meat, for instance.

Walkabout is very much about a clash in culture and cultural dominance. That culture that we presume to be dominant is our own, but it is not always the most relevant culture. For the brother and sister, their own culture is the “right” one, and thus anything outside of this culture is alien and not to be trusted. For the Aborigine, his culture is the only one he has contact with, and the way he expresses his interests, needs, and desires is the only one he has.

This is a special film, one that like several other Australian films I have seen, tap into something impossible to truly express in words. There is a connection to something primal here, something deep in our ancestral past that can only really be felt because it is too deep for us to have ever created a word for it. Part of this is, I think, the Australian landscape that is both a desert and full of life. It also has something to do with the commanding presence of David Gulpilil, who has a cinematic weight and a serious presence, even at this tender age.

Why to watch Walkabout: There is no coming-of-age film like it.
Why not to watch: You won’t like the climactic point.