Lots of Shooting, Not as Many Stars 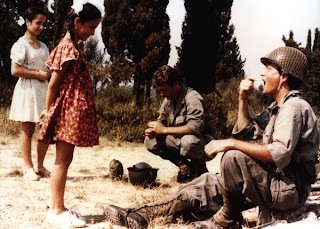 Most war films are about the war itself and the people who fight in it. That makes perfect sense, actually. When people are struggling with one another in life-and-death situations, the drama is naturally heightened. War affects everyone, though, and the stories of those who see war come to them are often just as compelling and in many ways more understandable. La Notte di San Lorenzo (Night of the Shooting Stars, although literally translated as “The Night of San Lorenzo”) is the story of a town affected not only by the presence of war, but also by the promise of its absence.

In a small Italian town near the end of World War II in Europe, the people are anxiously awaiting what will happen. The German Army has held the town for some time, but the advancing force of Americans is pushing them back to their own country. Typically, not wanting the enemy to benefit from their absence, the Germans have been destroying as much as they can during their retreat.

The Germans put the local Bishop (Giorgio Naddi) in charge. He tells the people that they should congregate in the cathedral, since that will be one of the only safe places. The Germans have wired a number of buildings in the town to explode, and they are planning on destroying those buildings at three in the morning. Anyone out on the street will be shot, and anyone remaining in a building scheduled for destruction will be killed. About half of the townspeople decide that going to the church is the safest course of action. The other half, led by Galvano (Omero Antonutti) don black coats and set out to find the Americans who are supposedly very close and are liberating the towns they encounter.

Included in this group is Cecilia (Micol Guidelli), through whose eyes much of the story comes. We are told that she is about six, but in point of fact she looks closer to nine. Early in the group’s departure, they stop at a pool and wait, listening for the explosions that will come at 3:00. We get the thoughts of several of them, regretting the loss of their houses, fearing the future and needing to start their lives over. In Cecilia’s case, this entire evening is an adventure. But nothing can halt the destruction of the town they have lived in, most for their entire lives.

Of course, the people who decided that trusting the German troops was a bad idea are proved correct, as a bomb goes off in the cathedral during mass. People split off from the group (some heading back to town and the possible safety of the church) while others encounter the Germans and are gunned down. And still the quest to find the Allied troops goes on, with the wandering townspeople hiding when they must and walking with no real direction when they can. Italians loyal to the German cause appear as well, fighting against their own countrymen. This culminates in a tragic firefight between the sudden partisans and the fascist black shirts when the two sides meet up in a wheat field, a scene that takes on a mythic significance through the eyes of Cecilia.

Since this is a story being told by the girl who has grown to be a woman, we can rest assured that she will make it to the end at least alive. The same cannot be said for anyone else, and there are some moments of tension here, and some sudden and unexpected deaths. And then comes the end of the film, which I will not spoil. I’ll only say that it is either the most frustrating end to a story that I have encountered, or a piece of brilliance. I still haven’t decided which is the case. It may honestly be both. But the last 10 minutes or so are strangely anti-climactic. It’s ultimately more realistic perhaps, but also emotionally unsatisfying.

It is, however, a beautiful film. There’s a real beauty to the Italian landscape. And there are moments of joy mixed in with the misery. In a way, it reminds me of A City of Sadness. Despite the war, despite the privation, despite the constant threat of death, life goes on.

Ultimately, though, I’m not sure how to react to this film. In a way, it feels unfinished, or at least the story does. This comes in part from it being told by someone who was six when it happened. However, there is a great deal here that is not from her perspective, large parts of the story that she was not privy to and would not have understood. So is it her story? And if it is the story of all of the people, why does it feel so half finished?

Why to watch La Notte di San Lorenzo: A unique look at a time of war.
Why not to watch: As with any war film, there’s a lot of suffering for those who deserve better.