Baby, It's Cold Inside

Film: The Ice Storm
Format: DVD from NetFlix on laptop. 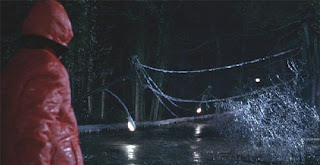 The 1970s were a strange time. I don’t remember a lot of the early ‘70s because I was little. Ang Lee’s The Ice Storm takes place during Thanksgiving in 1973 in the middle of the Watergate scandal. All I genuinely remember about Watergate is that for much a year, boring political stuff with people saying things that I didn’t understand pre-empted my favorite television shows. So when we’re told that this time was filled with a dissolution of spirit, community feeling, and even marriage vows, I’m sort of forced to take people older than me at their word.

And that is what The Ice Storm is very much about. It would be tempting and extremely easy to simply claim that the film is almost entirely about sex. On a first look, and even a second look, that’s a pretty simple place to take it, but that would be selling the film short. A great deal of the film does, in fact, focus on sex, but it’s hardly the only thing going on here. No, sex—not the sexual freedom and liberation of the 1960s, but the more callous, sex for pleasure at the expense of others—is merely the most obvious and common symptom of the underlying problem the film is trying to expose.

There are a lot of relationships here and a lot of characters, and to go through them all would be counter-productive. There are two main families, the Hoods and the Carvers. Ben (Kevin Kline) and Elena (Joan Allen) have children Paul (Tobey Maguire) and Wendy (Christina Ricci). Paul is away at college and frequently falls hopelessly in love with girls only to have his roommate Francis (David Krumholtz) bed them. Wendy is sexually promiscuous and experimenting. The Carvers consist of Janey (Sigourney Weaver) and Jim (Jamey Sheridan) with boys Mikey (Elijah Wood) and Sandy (Adam Hann-Byrd). In a weird bit of sexual synergy, Janey Carver is having an affair with Ben Hood (and, it’s likely, many other men) while Wendy Hood is sleeping with Mikey and trying to sleep with Sandy despite his evident fascination with violence.

The overriding feeling through the entire film is one of a lack of fulfillment. No one is satisfied with anything. Both Wendy and Elena try their hand at shoplifting, Elena doing it almost on a whim as if needing some sort of excitement in her life. Nothing works, though. This script is smart enough to avoid even the obvious pitfall of giving us religion as the answer to everything, especially what religion deems as specifically immoral behavior. Elena meets a pastor (Michael Cumpsty) whose church she attended in the past. It’s quickly evident that he’s looking for the same sort of thing, and his mention of “one-on-one counseling” has a decidedly perverted ring to it. No, there are no answers and no fulfillment anywhere here. In fact, around the middle of the film when Jim and Janey, Ben and Elena attend a cocktail party that turns into a key party (men throw their car keys into a bowl, the women fish out a set and go home with whomever’s keys they’ve selected), it becomes evident that these two couples and their kids aren’t the only ones looking for something they’re not going to find.

And then the ice storm of the title hits and in its own way, everything comes to a head, which is essentially the third act of the film.

The Ice Storm is yet another in the long list of films that I find myself respecting for what it is and for the story it tells, but that I am unable to really like. The theme of unfulfillment is, I think, a universal one. Everyone struggles in some way with wishing that their life could be more than it is or could be different in some real and critical way. Like I said at the top, I’m not old enough to remember this particular sexual revolution or sexual form of expression, although I don’t doubt it happened.

The performances are also universally good throughout the film. My biggest issue is that at some point, I simply stopped being that interested in what was going on. I get that these people are searching for something to give their lives meaning and are looking in the most obvious and physical places—alcohol, sex, drugs. But I know where this is going to lead. I know there will be an emotional blowback, a sudden realization that this path has not led to anything fulfilling and has instead cheapened everything. I’ve seen that moment before. I feel no real need to see it again. And again. And again.

The resolution here feels self-evident. I’d have been shocked if it had been anything significantly different. That’s really the problem. I get that The Ice Storm is a real and human film about real and human stories, but at some level, I wonder precisely why these people are as thick as they appear to be.

Why to watch The Ice Storm: You’d be hard-pressed to find a better modern cast.
Why not to watch: It’s sort of the same thing over and over.