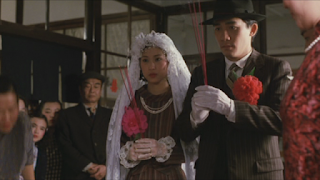 If I were a film student, I think I would strongly consider doing a dissertation on the cinema of oppression. It’s interesting, I think, how people react to films about the oppression of others. I think often we are more upset about the stories we don’t know and aren’t familiar with than with the ones that are more culturally our own. It’s probably from surprise. I’m not yet inured to the Holocaust despite having seen more than my share of films about it. The enormity of the event prevents me from ever really having a “been there, done that” attitude. And yet I find myself often more moved by stories of social evils and people buried under the weight of their wicked governments that I was not familiar with before watching. Why is this? I think it has something to do with familiarity. I know where a Holocaust film is going. I didn’t know enough about what happened in Taiwan post-World War II to really know much about Bei Qing Cheng Shi (A City of Sadness).

I knew nothing of what happened in Taiwan after it was given back to Mainland China after the war. As such, I had no idea what to expect or what kind of human injustice would crop up agains the people in this story. The film tells the story of a single family living in Taiwan after its return to Chinese rule following the war. Immediately there is corruption and trouble. While the people appear to be happy to be free of Japanese rule, the begin to see that not everything is as good as it once was. Food becomes scarce, and the systematic oppression of the people, particularly those sent to Taiwan by Chang Kai-shek becomes the norm.

The real trouble begins when a woman selling illegal cigarettes is viciously beaten. When the people protest, the troops from the Mainland open fire. This is a true historical event known as the 228 Incident (it happened on February 28). The oppression becomes the rule of law, and those considered most dangerous—students, teachers, lawyers, doctors—are rounded up and imprisoned or killed outright.

What makes Bei Qing Cheng Shi interesting as a film is that the White Terror as this time in Taiwanese history became known is central to the story, it is not especially the focus of the story. Instead, it is daily life that is put center stage. In a way, the film suggests that even though these terrible events are going on, life goes on as well. People still need to eat, children need to be taken care of. Life doesn’t stop because the world has changed drastically for the worse.

Central to the film is the performance of Tony Leung Chiu Wai as Wen-ching, the youngest son of the family in question. Leung plays the role as a deaf-mute because he could not speak any of the languages being used in the film, so this conceit was created to allow him to perform the role without any sort of compromise. It’s a moving role—someone who cannot effectively communicate except through writing is continually challenged more than anyone else by the reality of the terror program going on. His “speech” is handled interestingly—we get what amounts to silent film intertitles for anything he writes and anything written to communicate with him.

But, of course, the family cannot avoid being greatly affected by the systematic program of terror occurring in Taiwan. Each of the three brothers we meet (the fourth has disappeared in the Philippines) runs into his own problem with the Kuomintang. And of course there is the equally systematic program of misinformation, lying, and pretended benevolence to match the terror campaign, and this two affects not only the family but everyone in the story. Cinema veterans know the moment the government broadcasts that there will be no reprisals that such reprisals are almost certainly on the way.

Bei Qing Cheng Shi is a powerful film, and is so because of its dedication to showing not only the terror of the situation and the oppression of the Kuomintang, but specifically because it attempt to show the day-to-day life of the people trying to deal with such troubles. It’s biggest problem is also, ironically, one of its biggest strengths, at least for me. Because I was unfamiliar with the history in question, there were times when I followed the story with difficulty. And yet it made the story in many ways completely new, and that’s not an easy thing. Films about terrible events are common because they come with ready-made drama. I’m not easily surprised, but I was here.

Why to watch Bei Qing Cheng Shi: A story you’re not familiar with, even though you sort of are.
Why not to watch: It’s another film where nothing good happens.