Film: Get Carter
Format: DVD from NetFlix on laptop. 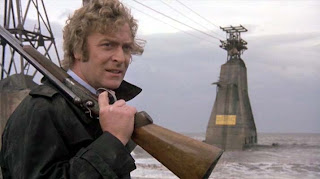 A few years ago when Stallone remade Get Carter I was vaguely aware that it was a remake but knew nothing about it or about the original. In my mind for some reason I conflated it with Cop Land despite the films being three years apart. Anyway, I knew nothing about Get Carter going in and really wasn’t prepared for the film that I watched. That’s not a complaint; it’s just a statement of fact.

Get Carter is a sort of a British take on post-noir noir and an early prototype of what the British gangster/crime film would become in later years. Gone with this are the days of polite Limey crime like The Lavender Hill Mob. No, Get Carter is sex and violence, so much so that it was originally given an X rating. The film it most reminds me of is Point Blank, and while it shares a sense and a kinetic sense with the earlier film, it’s also not quite as taut, substituting complexity, nudity, and violence for style.

Jack Carter (Michael Caine) is a hired killer sleeping with the girlfriend of his boss. He returns to his hometown of Newcastle when he learns that his brother Frank has died. The official report is that Frank got completely plastered on whiskey and drove his car into the ocean. Jack Carter doesn’t buy this because Frank didn’t drink whiskey. No, someone murdered Frank Carter, and Jack’s only thought is to find out who is responsible and take them down with extreme prejudice.

This journey to find his brother’s killer leads him into a very complicated web of lies and false trails, and frankly it’s frequently difficult to keep all of the names and faces straight. This is not at all helped by the fact that Jack evidently has a desperate need to kill everyone who has ever met his brother at all. Many, many conversations end with someone stabbed, clubbed, injected with an overdose, or shoved into the trunk of a car.

As mentioned, there’s a ton of violence here. Much of it would seem tame by today’s standards, and quite a lot of it would even feel at home on primetime television. There’s also a great deal of nudity and sex, and this runs the gamut. We get, for instance, a scene of Carter and his girlfriend Anna (Britt Ekland) having phone sex, which is undoubtedly intended to be titillating. But the film opens with Carter, Anna, and his bosses looking at a pornographic slideshow, parts of which are only vaguely hidden, and these are just dirty. There’s more like this since pornography ends up being an important plot point eventually. This is not intended to be titillating, and it isn’t; it’s seedy, which is the mood it’s going for.

All of this is what it is. The biggest issue here is the total lack of remorse expressed by Carter for anything that he does throughout the film. At one point, for instance, he forces a woman into the trunk of his car thanks to her participation in a pornographic film involving Carter’s underaged niece Doreen (Petra Markham). Shortly thereafter, when confronted by a few enemies, Carter watches impassively as the car (still containing the woman) is pushed off a dock and into the ocean, where it sinks. He kills without conscience and without remorse, something that the censors undoubtedly noticed and weren’t too happy about.

So we get that the film is morally grey (at best), contains some unpleasant (in places) nudity and a rash of killings that come out of nowhere. But is it any good? It’s difficult to say, really. On the one hand, I respect a lot of what this film does and tried to do. It’s looking to create something much grittier than people had experienced up to this point, to add a level of realism and harshness to the crime genre. It succeeds at this beautifully. Get Carter exudes a grim perspective with no effort at lightening the mood. It is a film in which nothing really good happens to much of anybody. No, everyone is doomed from the start, forced into paying penance for their previous and current sins. Most won’t have future sins because of Jack Carter’s penchant for throwing people off roofs or stabbing them once they are no longer useful.

It’s a hard film to judge. I respect what it does, but it does seem somehow inappropriate to root for…anyone…in this film. It feels like a grimy James Bond with its series of sad, mutilated bodies left mostly unmourned. There’s a real darkness here that’s difficult to identify, an aggressive ugliness part and parcel with the world it depicts. I respect that. But I’d still probably rather rewatch Point Blank.

Why to watch Get Carter: It takes crime films in a gritty new direction.
Why not to watch: It's pretty unpleasant.