Politics is a Dirty Business 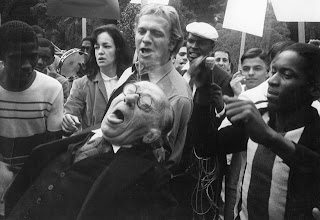 The computer I use for this blog doesn’t actually belong to me; it’s my work laptop. This places certain restrictions on me in terms of what I can and can’t do. When Chip Lary at Tips from Chip sent me a huge chunk of rare films, I convinced my IT guy (and since Mike is cool, it didn’t take much effort) to let me store these films directly on my hard drive. Since then, I’ve been trying to take out these rarities at a pretty regular pace. Because these films are rarities, I go into them pretty cold. I watched Terra em Transe (Earth Entranced, sometimes called Entranced Earth) knowing nothing more than that it was Brazilian and came from the late 1960s.

This is the story of Paulo Martins (Jardel Filho), a journalist and poet living in the fictional Central (or South) American country of Eldorado. He is a man of the people, wanting to bring happiness and prosperity to the land. To do this, he latches onto two politicians, each very different in important ways, but identical in the ways that matter. Both are opportunist and tell people what they want to hear to achieve and retain power. The president of the country is the conservative Porfirio Diaz (Paulo Autran), while the governor of the area is a populist who doesn’t practice what he claims to preach. This is Felipe Vieira (Jose Lewgoy). Vierira and Diaz hate each other, but both are connected to Paulo.

The heart of the film, then, is this divide between these two ideologies and the hypocrisy that both seem to resent in themselves. As we watch, Paulo’s faith in these two men slowly gives way into disillusionment as it becomes obvious that neither of these men have the best interests of anyone but themselves in mind, and that the power they have gained that could be used for the benefit of the poor and needy is instead being used to prop themselves up into higher and more powerful positions.

Here’s the thing: I have no idea what’s going on through the bulk of this film. While I’m pretty sure that everything that I posted in the paragraphs above is accurate, I can’t entirely be sure, because Terra em Transe is incredibly opaque and dense. It’s evident that director Glauber Rocha was influenced by a number of important filmmakers like Godard and Bunuel, and was influenced by their more artistic side than in their ability to tell stories.

For example, scenes cut in what feels like the middle. Songs play and abruptly cut, switching scene immediately to the next when it feels like we need another minute or thirty seconds for some sort of resolution. There’s a great deal going on that feels like it’s inside the head of Paulo, but no indication that what we’re seeing isn’t something that’s really happening. No, we’re left to figure this out for ourselves and given nothing like a roadmap to help guide us to our eventual and ultimate destination.

I don’t like it when films do this, because it makes me feel dumb. I’m not saying that I’m not dumb—I’m saying that I don’t like to be reminded of that fact because I’m not always capable of following the narrative structure at the level created by Rocha. I also can’t honestly say whether or not Rocha is a genius, an amateur, or both. In other words, I don’t have any way to tell if the parts that I find so amateurish are that way intentionally or because Rocha didn’t have the requisite skill to tell a story from front to back in a coherent manner. Terra em Transe feels like artistic style at the cost of actual substance, and it’s very difficult for me to respect that choice.

The biggest problem here that I see is Terra em Transe’s attempts to make something deeper and more important than the story on the surface. Okay, I get that it’s important and almost certainly allegorical in some way to be reflective of Brazil’s politics and political situation. Since the whole thing is borderline mythology and not reflective of an objectively true story, I’m left not being able to parse out its parts.

So, while Terra em Transe might be the film of a genius at work, it also may be nothing more than a crude set of images handed down to us by someone who hasn’t quite figured out the realities of storytelling yet. Hard to recommend based on that.

Why to watch Terra em Transe: Rebellion!
Why not to watch: Confusion!