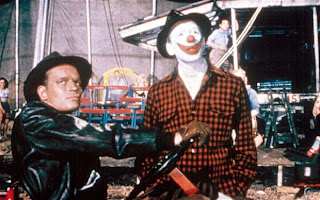 It would be completely dishonest of me to not mention at the start of this that I really don’t like circuses. I mean that I really don’t like them. That being the case, The Greatest Show on Earth has a strike against it before I’ve cracked open the DVD case. Strike two is that this film is often mentioned as a film that should never have won Best Picture. There’s almost always some anger around what wins in any given year, and most of that is reserved for recent memory. Most people couldn’t peg this as something that won that particular award. Unlike classic winners like Casablanca and Gone with the Wind, The Greatest Show on Earth has sort of faded into a sort of well-deserved obscurity.

Super-heroishly named Brad Braden (Charlton Heston) runs the Ringling Brothers and Barnum & Bailey Circus as it travels around the country. But the circus is going through some rough times in the post-war depression years and the bigwigs of the big top want to run a short season—10 weeks playing only the major cities. Brad convinces them to allow him to continue on the road as long as the show remains in the black. He does this by telling them he’s acquired the services of The Great Sebastian (Cornell Wild), the world’s greatest trapeze artist, and that Sebastian only agreed to work for the circus on the promise of a full season.

So off they go. There are plenty of circus performances here, and while they’re probably the main reason many people wanted to see this in the first place, they certainly aren’t enough to hang a 2 ½ hour film on, so we’ve got to have plenty of sub-plots. Here they are:

1) Brad is focused on the circus, but is also romantically involved with trapeze artist Holly (Betty Hutton). To get The Great Sebastian, he’s had to take Holly out of the center ring, which creates serious tension between them.
2) The Great Sebastian is quite the womanizer, and has relationships with a number of the women in the show, including Angel (Gloria Grahame). However, once he sees fellow trapeze artist Holly, he sets his sights on her.
3) Angel is being pursued by Klaus (Lyle Bettger), the elephant trainer, and he won’t take no for an answer. Meanwhile, with Holly canoodling with Sebastian, Angel begins pursuing Brad.
4) Buttons the Clown (James Stewart) never appears without his make-up. This is because he is wanted by the law for murdering his wife. Eventually, the police show up and start sniffing around the circus.
5) Harry (John Kellogg) who runs the midway also runs a crooked show, much to Brad’s dismay. Harry actually works for a man named Henderson (Lawrence Tierney). Eventually, Brad is forced to fire Harry and for unrelated reasons, Klaus.
6) Harry and Klaus join forces to rob the circus by stopping one of the trains. This causes a massive train accident.
7) In an effort to continually impress Holly, Sebastian tries a ridiculously difficult stunt without a net and fails, falling 40 feet to the ground and evidently ruining his right hand and arm, making him useless as a trapeze artist.

Okay, that’s certainly enough for any film. As the circus moves from town to town, there’s a lot of mixing of these plots. It’s not at all difficult to keep anything straight, and naturally everything pretty much resolves itself out in the last half hour. Once the trains collide, there’s chaos and then everyone ends up on the same team because, of course, the show must go on. Bad guys of any stripe are punished, good guys of all sorts are rewarded, and hooray for the circus.

So all of that seems pretty much part and parcel of what we’d expect from an epic film of the early 1950s. The Greatest Show on Earth is a completely inoffensive film, offering some pretty good circus performances, a lot of clowns (I hate clowns), and some behind-the-scenes romance. The train collision was one of the big selling points, of course. It goes on forever and there’s all sorts of exciting chaos. I’ll hand the film this—it’s pretty cool.

But a lot of the rest really isn’t. James Stewart is great, of course, but he almost always was. He’s unrecognizable behind the clown white and giant smile until he talks, and then he’s immediately James Stewart. Buttons is a good character, though, and is so specifically because of Stewart’s performance—it’s evidence that he could make a character come to life even while wearing some ridiculous make-up. I’ll hand it to Cornell Wild as well—The Great Sebastian is kind of a dick and pretty sold on himself, but he’s entirely believable.

And that’s it. Charlton Heston overacts in only the way that Charlton Heston could, but even he takes a back seat to Betty Hutton. She reacts to everything around her in exactly the same way—as if it is the most important thing that has ever happened in the history of the world. I can forgive her raspy, I-just-smoked-a-pack-of-Luckies voice. I can forgive the incredibly bad rear projection work when she’s swinging on a trapeze. I can’t forgive the fact that at every opportunity she acts like a teenage girl. Seriously, there is no neutral in the performance of Betty Hutton. Pull her down from her act because a rope is fraying? You’re the worst criminal in history. Show her that the rope was fraying and she’d have fallen to her death? You’re the new Jesus.

The biggest problem with The Greatest Show on Earth isn’t that it’s bad. It’s that it’s so completely not very good. For all the glitz and glamour and excitement most people feel when it comes to the circus showing up, the actual story here is completely bland and utterly average. In many ways, it plays like a musical about how great musicals are (42nd Street, Footlight Parade, Babes in Arms, etc.) except it’s a circus show about how great circus shows are. There’s drama behind the scenes! Yeah, and? That’s not really news, and the love story between a couple of circus performers isn’t inherently more interesting just because they work in a circus. A shady guy running a circus midway isn’t more interesting than a shady guy running numbers for the mob.

And so that is really the film’s biggest fall-down. It purports itself to be bigger than life, and it simply isn’t. The places where it is bigger than life feel hollow. It’s not bad, it’s just not that special. For something like the circus, that’s the biggest sin imaginable.

Why to watch The Greatest Show on Earth: No one did “big” like DeMille.
Why not to watch: It very well may be the least deserving Best Picture in history.