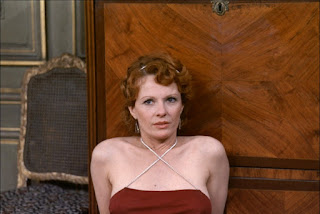 Up to tonight, I’d seen exactly three films featuring Delphine Seyrig. I’ve absolutely hated two of them (Last Year at Marienbad, Jeanne Dielmann) and really enjoyed one (The Discreet Charm of the Bourgeoisie). It would appear, then, that a fourth film will tell the tale. Either Seyrig will come out close to even (although I really hate those two films) or will get her third strike. The film in question this time is India Song, which, despite its name, is French and was filmed in Paris.

Yeah. We’re not getting out of this one unscathed. Part of that is due to either the unfortunate state of the print or something else, but a large part of it is that this film moves at the pace of a basalt slab. Its one effective speed is “stop.” I didn’t think it was possible for a film to be more motionless than either Marienbad or Jeanne Dielmann, and yet here we are, watching a film for which all of the voices were recorded before the film was made and we spend minutes at a time watching three people lay unmoving on a floor. Were it not for the evidence available in Discreet Charm, I’d be half convinced that Delphine Seyrig was actually a mannequin.

No one will accuse India Song of having an over-abundance of plot. In a nutshell, the wife of the French ambassador to India in the 1930s (Seyrig) finds her life oppressive and boring. To compensate, she has sex with anything wearing pants. Her husband is aware of this and lets it happen anyway. Essentially the entire film is the serial adultery of the bored wife of a diplomat. Make Seyrig 20 years younger, add a soft jazz soundtrack and you’ve got a film that will play on late night Cinemax, probably under the name of something like Lady Chatterley 3: Nights in Lahore.

Evidently, India Song was developed from an unproduced play written by director Duras. Based on what the film shows us, I can well imagine why this play was never produced. It seems like they simply forgot to have something occur. We get endless panning shots of the landscapes around the ambassador’s mansion that sits as a central focus. Over this plays a voiceover that talks about the Ganges. This voiceover is done in the style of a conversation, of someone telling a story to several people. One voice asks a question, another answers. Someone walks into the shot and a voice tells us who the person is. People stand around.

I could legitimately take all of this as something like an experiment if I had something to look at, but most of the time, I simply don’t. I am aware that the files I got for this film were downloaded off YouTube, and that certainly affects the quality at some level, but the quality is so bad here for so much of the film that I can’t help but think it’s partially intentional. The reason I think this is that there are moments when the film is relatively clear. There are shots when I can make out distinct things in the foreground or background. But a great deal of the film appears shot by a director of photography suffering from severe glaucoma. There’s almost a film over the celluloid, like someone cleaned the camera lens with an uncooked pork chop. Half the time, I can’t tell one person from another. Three people lay on the floor, and I know they are three people, but they look like three partially melted wax statues.

Delphine Seyrig has become one of my least favorite actresses ever. There, I said it. Just the name makes the hair on the back of my neck stand up. I blame her for everything.

If I had to pick a film that this most reminds me of, it would be Last Year at Marienbad, and not for any good reason. It has the same sensibilities to the point where I’m fairly certain that Duras studied that film extensively to make this one, but with fewer sets. Seriously, a huge chunk of the film takes place in one room. There’s a piano. Delphine Seyrig dances in with a guy who is briefly explained to us, although I could never tell one from the other. Then they move out of the range of the camera and her husband walks in and stands motionless next to the piano. Over all of this, voices talk.

Seriously. At one point, her husband decides he’s going to (I think) give her an excuse to leave him, so he has this epic public freakout. Do we see it? No. We see her stand stock-still next to a guy for a couple of minutes while it sounds like her husband is being water boarded just off screen. I’d call this a reaction shot, except that the pair on screen show about the same amount of emotion as they would watching the curding process of a vat of cheddar. Instead of seeing him losing his shit, we get the voices telling us what happened. “He’s shouting.” “They’ve got him.” “Now he’s outside.” “He’s laughing and crying.” Meanwhile, I’m propping my eyelids up with toothpicks. This goes on for minutes. It never ends.

This film is shit. I don’t care what The Book says.

Why to watch India song: You’re a completist or a masochist.
Why not to watch: There is no possible way I could limit it to one reason.