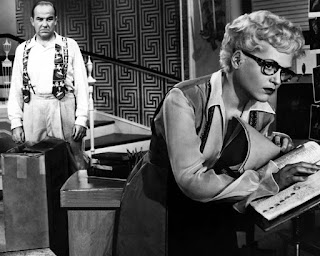 I think it’s hard to play dumb convincingly. Sure, plenty of people in the movies play dumber than they are, but a lot of them don’t do it very well. That vacuous, nothing-going-on-behind-the-eyes look takes real talent. Judy Holliday could pull it off so well that it’s tempting to think she might really have been that empty between the ears. That’s talent. Bette Davis couldn’t do it and neither could Katherine Hepburn. If you really want to see someone very smart act very, very dumb, you’ll want to take a close look at Born Yesterday.

Harry Brock (Broderick Crawford) is a junk dealer, and one who has never really worried too much about the legality of what he does. Because of this, he has a great deal of influence and money and he’s looking for more of both. He arrives in Washington where he meets with Jim Devery (Howard St. John), his lawyer. Their discussion is (we gather—it’s never very explicit) on how to spend enough money in Congress to get some shady deals moved through.

Travelling with Brock is ex-chorus girl Billie Dawn (Judy Holliday), his long-time fiancée. Billie is pretty, dumb, and socially embarrassing for Harry due to her lack of social graces. She is essentially his arm candy. Billie is also useful as a sort of cover for many of Brock’s shadier dealings. Jim tells her to sign things and sign she does, not caring what anything is or what it means, and completely unaware that Harry Brock has actually placed her in control of the bulk of his fortune.

Enter Paul Verrall (William Holden), a newspaper reporter hired by Harry to educate Billie. Harry’s goal is for Billie to become acceptable in public so that her lack of knowledge and lack of tact won’t be an impediment to his goals. Of course, since this is a comedy, Paul and Billie fall hard for each other right away. And as time goes on, Billie starts paying attention to things and starts using the brain she’s always had.

Born Yesterday works better than most comedies for a variety of important reasons. The first of these is the stellar performances. William Holden is serviceably good, as good as he usually is, but not as spectacularly good as he is in films like Network or Stalag 17. No, the two to watch here are Broderick Crawford and Judy Holliday. For his part, Crawford plays a blustering thug, and does it just about perfectly. While he’s over the top in places, he’s never a caricature, and Harry Brock is always at least believable as an overbearing and surly goon, and is almost always pitch perfect yelling for people to come attend his current whim. Judy Holliday could not have improved this performance in any way that I can see. It’s a role she originated on stage, and it shows a remarkable knowledge of every beat of the script. Her Billie Dawn is flawless.

Second, Born Yesterday is remarkable for its nearly perfect use of irony as the source of its comedy. The entire driving mechanism of the film is the idea that Harry Brock wants Billie to be educated to prevent him from being embarrassed. The joke running through the entire film is that Brock needs no help in being embarrassed—he’s just as uneducated as she is and far more crude and cruel, far more off-putting than anything Billie could muster. While she’s not a stranger to a faux pas now and again, Brock is a walking cyclone of social destruction and unintentional, unknown offense. He’s rich and influential, but he’s also a swine and is too thick to realize he is the source of more social gaffes than she is.

Third, and this one is critically important, Born Yesterday is almost never laugh-out-loud funny. Oh, the situation is plenty funny all the way through and there are a number of fantastic lines delivered beautifully, but this film downplays the comedy instead of going for all out chuckles. It also gets pretty dark at times, most specifically in the scene in which Billie refuses to sign some critical papers and Harry slaps her until she agrees. There’s nothing funny about this, and the film is smart enough to not play it for anything like a laugh; it’s a brutal sequence that comes across as surprisingly sobering in a film that had up to that point been at least light if not always lighthearted.

In other words, I expected entertaining fluff and to be at least mildly outraged at the injustice of a little comedic goof of a performance from Judy Holliday winning a Best Actress Oscar over Gloria Swanson in Sunset Blvd. or either of the lead performances in All About Eve. Instead, this is a film with some comic sensibilities, but with a real dramatic sense as well, a film that hides its surprising substance under a thin candy shell. In Judy Holliday, we have a performance about as good as any other and doubly good because it seems like it should be candy floss instead of steak. We’re not long in discovering that Billie Dawn has some teeth and isn’t afraid to bare her fangs when necessary.

It’s a wonderful thing when a film can surprise someone like me, who is a bit jaded and is at least a hardened veteran of films of this era. Born Yesterday is one to watch, one to love.

Why to watch Born Yesterday: For a film with so many dumb characters, it’s really smart.
Why not to watch: Domestic abuse.