Cynthia, my librarian, loves Pedro Almodovar. We talk movies now and then, and whenever one of his movies comes up, the tone of her voice changes. I don’t think this is terribly uncommon. Almodovar is generally thought of as a director of women’s movies. I believe this is a misnomer. Certainly his films focus on women in general and he often has many memorable female characters. However, I’ve really enjoyed the films of his that I have seen. The fact that they focus on women makes no difference to me—I like that they focus on interesting characters and real stories. 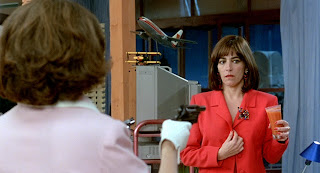 Mujeres al Borde de un Ataque de Nervios (Women on the Verge of a Nervous Breakdown is one of the most appropriately named films I’ve seen in a long time. It’s also a film that more than almost any other I have seen in recent memory depends on Dickensian coincidences that would embarrass most amateur writers. Oddly, it sort of works in this film because the coincidences pile up to such an insane degree that it quickly becomes ridiculous. Let’s see if we can make sense of things.

Pepa (Carmen Maura) is an actress and voice-over artist who lives and works with Ivan (Fernando Guillen), who is in the process of leaving her for another (at this time unknown) woman. Pepa has news for him but he refuses to talk to her. He instead tells her that he is leaving for Stockholm and needs a bag packed. Pepa decides it’s time to leave her penthouse apartment and goes to a realtor to see about renting it out. The first people to show up are Carlos (an extremely young Antonio Banderas) and his snobby fiancée Marisa (Rossy de Palma, who is extremely odd looking. I’m not saying that’s a thing, I’m merely saying it’s true). And, of course, Carlos happens to be the son of Ivan from a previous relationship.

Meanwhile, Pepa’s friend Candela (Maria Barranco) is in her own confused mental state. She had a relationship with an Arabic man who turned out to be a recently-arrested Shiite terrorist, who then brought the other members of his cell to live in Candela’s apartment. Completely wigged out that she’ll be arrested as a conspirator, she is looking for any sane advice. Carlos recommends going to the feminist lawyer Paulina Morales (Kiti Manver), who is short and rude about the case when contacted. Why? Because she is the woman Ivan is taking to Stockholm. And the terrorists are naturally planning to hijack the very flight that Ivan will be on.

Now we throw in Lucia (Julieta Serrano), Carlos’s crazy mother. I mean crazy—she was institutionalized for years and has only recently been released. She is still hung up on Ivan and is convinced that Pepa is heading to Stockholm with him. She arrives at Pepa’s penthouse at the same time as the police, and she’s got murder on her mind. Throw in a blender full of spiked gazpacho, a twice-destroyed phone, and a burning mattress and you have a recipe for nutty behavior, drugged people, attempted murder, and insanity.

This is a strange film in many ways. There are certainly moments in it that are funny, like Carlos’s sudden infatuation with Candela and Marisa’s unfortunate drinking of the spiked gazpacho. But it’s also sort of tragic even when it’s funny. It’s a screwball tragedy, more or less. It’s the insane level of coincidences that I have trouble taking. Pepa takes a taxi three times in the film, and each time, it’s the same tricked out cab driven by the same guy (Guillermo Montesinos) with a giant pompadour. And these people are insane. When the insane Lucia hijacks a motorcycle, the driver’s girlfriend blames him, accuses him of cheating on her with the insane woman and threatens to leave him. I have no decent way to react to that sort of stupidity. And this makes it hard to classify. Is it a drama? Yeah. Is it a comedy? Yeah. But it’s also not really either.

I didn’t specifically dislike Mujeres al Borde de un Ataque de Nervios, but I also didn’t love it. It’s the least of the Almodovar I’ve seen, although I admit that that isn’t saying a ton, since I tend to like his films. It’s simply too crazy, too coincidental, too much a farce with not enough reality in it for me to ultimately care a lot about anyone in it. I do like Pepa. I wish she had a better film to be a character in.

Hable con Ella (Talk to Her) is the first Almodovar film I’ve seen that is even remotely about men. It’s an interesting switch, and an interesting switch in terms of what the typical film about women is like. A typical “women’s film” deals, essentially, with men. Women exist only in as much as they have issues with the men in their lives. Hable con Ella is the perfect reverse of this. While about two men, it deals almost exclusively with their relationships to two women. It is the complete inverse of the traditional “chick flick,” and there’s a brilliance there that’s hard to describe.

The switch here is that the two women in question are in comas. One pair is Marco (Dario Grandinetti) and Lydia (Rosario Flores). Marco, we learn, is something of a hopeless romantic and is still pining for a woman he once loved. He writes for a magazine and sees a story on Lydia, who is a bullfighter, but who seems to be tabloid fodder because of her broken relationship with another matador. Marco attempts to interview her, but she soon realizes (since he knows nothing of bullfighting) that he too is more interested in her failed relationship than her career. Eventually, though, the two become a couple, in part because she has a severe phobia of snakes, which reminds him of his lost love. As their relationship becomes more serious, Lydia tells him that she needs to speak with him, but never does, because she is gored in the ring and slips into a persistent vegetative state.

The other couple sort of really isn’t a couple. Benigno Martin (Javier Camara) is a nurse who takes care of another woman in a persistent vegetative state. She is Alicia (Leonor Watling), someone for whom he carried a torch. Alicia had been a dancer, but was struck by a car. Benigno, having cared for his own harridan of a mother during her last days, was in many ways the perfect caregiver for Alicia, so he is hired for the job by her father, who is relatively convinced that Benigno is gay.

As things happen, Lydia ends up in the same facility where Alicia is being cared for, and the two begin talking. Marco, who seems to have bad luck in relationships and also frequently seems to be emotionally broken, is advised to talk to Lydia. Complications arise when Lydia’s former lover, the matador Nino (Adolfo Fernandez) tells him that Lydia’s news was that she was leaving Marco for him. In the other relationship, it soon becomes aware to the staff of the facility that something very strange is going on with Alicia, and Benigno may have less than the purest designs on her.

This is a fascinating and strange film, one more in keeping with the Almodovar I know. Additionally, it moves in ways between a film like All About My Mother and the far more gruesome and disturbing The Skin I Live In. It marks a particular point on Almodovar’s personal growth between those two types of film and a push toward not merely the emotional part of relationships, but the physical nature as well. Additionally, and importantly, it continues something Almodovar seems to have always done; it explores a number of ideas about what a relationship means, and even what a person’s sexuality is.

For me, the biggest downside to this film is the fact that (and I’m not trying to be shallow here—just honest) the fact that the women have tracheotomies. Tracheotomies freak me out. I’d be saying the same thing if the men were in comas. I’m incredibly particular about my neck and having things touch it, and the whole concept of a trach sends me into a minor panic. I had to look away or at least not concentrate on parts of the screen in certain scenes.

Still, the biggest innovation of this film is the entire concept of how it is focused. It’s Almodovar’s most male-dominated film that I’ve seen (and I’ve seen five of his films now), and yet is still entirely centered on the two women. The men here have no existence outside of the women in their lives, much as women are typically treated in film. So, in its own way, Hable con Ella is mildly subversive, and I respect the hell out of that. In fact, I love the gender reversal here entirely—it’s not just Lydia, but also Benigno who follow career paths that are generally thought of as being completely opposite typical gender roles.

Subversive or not, though, it’s still pretty damn fine.

Why to watch Hable con Ella: A perfect reversal of the classic “chick flick.”
Why not to watch: Tracheotomies.