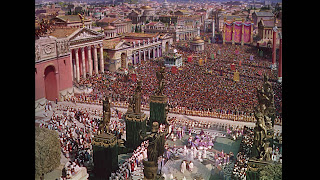 I’ll try not to get too anti-religion on you with this one, but that’s not easy for someone with my religious outlook when it comes to a film like Quo Vadis. This is a film tailor-made for the sort of Christian believer who wants to claim persecution for his or her faith, since this film is entirely about the persecution of Christianity by the Roman Empire under the reign of Nero. Never once are we led to doubt anything but the literal truth of the biblical account, and right there and in a large way the film loses me.

General Marcus Vinicius (the ever-bland Robert Taylor) returns to Rome after a three-year campaign pacifying the hinterlands for the greater glory of the insane Emperor Nero (Peter Ustinov). Once back in town, he visits the home of retired general Aulus Plautius (Felix Aylmer) where he encounters Plautius’s adopted daughter/hostage/ward of the state Lygia (Deborah Kerr). Vinicius does everything he can to impress the girl to no end. She’s not swayed by his treating her like a slave, nor his tales of slaughtering barbarians. Eventually Vinicius leaves and we learn that Lygia and her adopted family are actually secret Christians.

Meanwhile, Vinicius visits his uncle Petronius (Leo Genn), who has the ear of Nero. Nero, we learn, fancies himself quite the poet and musician. It is Petronius’s job to tell Nero how great he is, and Petronius manages to do this, playing on Nero’s native arrogance and stupidity. In fact, Petronuis frequently mocks Nero openly, disguising it so well that no one can tell. Petronius offers his slave woman Eunice (Marina Berti) to Vinicius, who refuses. Eunice, it turns out, is in love with her master anyway. Additionally, Nero’s wife Poppaea (Patricia Laffan) decides she’d like a little slice of Vinicius herself.

Ultimately, Vinicius discovers that Lygia is not really the daughter or adopted daughter of his friend, but is actually a hostage, which means that she lives where she does at the whim of Nero. He arranges for himself to be given care of her, and does so specifically because he wants a little bouncy-bouncy from the sexy hostage girl. She refuses, of course, but the tepid love story between the pair grows nonetheless.

Things come to a head when Nero, filled with the desire to create a true epic, decides that it’s time to burn down Rome and rebuild it in his own image. He does, and then blames the Christians for the deed, which starts the persecution of the same. There’s plenty of Christians thrown to the lions and being burned on crosses, and eventually Vinicius is forced to deal with the fact that his girlfriend is going to be sacrificed as well on the altar of Nero’s ego.

There’s lots more, I suppose—the film is nearly three hours long, after all—but that’s enough for now. Let’s shift instead to talk about the things that really work here. First, and primarily, this is a Cecil B. DeMille-style massive epic (despite being directed by Mervyn LeRoy), and it really does work in this aspect. There are something like 30,000 extras in the film, and it’s pretty evident that in some scenes, they were all there at the same time. This is grand on the sort of scale that isn’t much seen any more. I admit that that’s a very fun aspect of this film.

Second, we have the colossal performance of Peter Ustinov, who was never better than he was in this role. His version of Nero is like a petulant six-year-old, completely egotistical, convinced of the rightness of everything he does, and bitterly angry at anything that doesn’t go perfectly his way. Nero is a coward and a wastrel and an ugly presence, and Ustinov nails the performance so well, I’m mildly surprised he was nominated only for Best Supporting Actor and not for Best Actor. There’s also a bit of evidence that Ustinov decided to play Nero with a hint of being gay, not that that’s here nor there. I couldn’t not think that, though.

There’s a lot of downside, though, and while part of that is the ridiculous apologetics in this film, I’ll try to make that the briefest part of the criticism. In short, the film offers a modern apologetic of Christianity that is not at all in keeping with biblical lore or law, or with history. Those early Christians had no real problem with slavery, for instance, despite what this film would have you believe. Also, when Vinicius offers to honor Lygia’s God, it’s not enough for her—no, he has to believe fully and completely (and release his slaves from bondage) for her to be happy.

Anyway, a much larger problem is the extremely tepid and unbelievable romance between our two leads. Lygia is treated so poorly by Vinicius throughout the first half of the film but falls for him anyway. I don’t buy it, and I challenge anyone to think about it for more than a few seconds while watching the film to buy it, too. There’s no chemistry between them, and Vinicius does nothing that would in any way make Lygia want to spend time with her. In fact, their relationship up until their first clinch, is entirely one-sided and entirely abusive.

In any event, Quo Vadis is far too long for the story it tells. It’s a grand spectacle, but little more than that. It’s theology is historically inaccurate, and the theology is absolutely central to the story, not that most mainline Christians would notice or care. It presents a kindergarten-level brand of spirituality and passes it off as fact. I can forgive that. I can’t forgive just how boring Robert Taylor is, though.

Why to watch Quo Vadis: An epic on an epic scale.
Why not to watch: It’s three hours of proselytism.