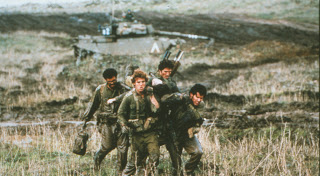 I think I’ve mentioned before that there was a time in my life when my favorite genre of film was war films. When I was a kid, I liked the adventurous nature of films showing combat, something true in the main because the war films I had access to tended to be from the 1940s and ‘50s, and tended to be of the more jingoistic variety. The good guys always completed their mission and stopped the Nazis in their tracks. Much of the time, this came down to American ingenuity and determination. As I’ve gotten older, I’ve changed just as the genre has changed. War films now are not about plucky Americans overcoming seemingly insurmountable odds. No, these days, filmmakers have the correct idea in most cases of showing war for what it is: something awful, confusing, and terrifying. So it is with Amos Gitai’s Kippur.

I’ve seen plenty of war movies of the last few years. It’s really no surprise; after all, war is a common event in the world and has been for millennia. I’ve seen war films from the point of view of the combatants, films that show the combatants on both sides, modern war, ancient war, war as seen by children, war from the point of view of the bystanders, and war seen through the eyes of the prisoners. But Kippur gives us something different—war through the eyes of the men who go to the battlefield and pick up the bodies of the dead and dying, transferring them back to the hospital. We don’t see the shooting war; we see the terrible and tragic aftermath.

The war in question is the Yom Kippur War of 1973 (hence the title of the film), when Egypt and Syria attacked Israel on one of the country’s highest holy days. We start with one of our characters, Weinraub (Liron Levo) as he and his girlfriend spend the morning of Yom Kippur not really observing the holy day in its typical fashion. Rather than praying and fasting, they’re having wild sex amid a giant splash of paint. Then the sirens go off, meaning trouble.

Weinraub and is friend Ruso (Tomer Russo) have been called to their unit because of the attack on the Golan Heights. The attack has caught everyone by surprise, though, and the pair are unable to locate their reserve unit in the confusion. The next morning, they are found by a man named Dr. Klauzner (Uri Klauzner), who asks them to drive him to his base. They do so, and realizing that they will likely never find their reserve unit, enlist with a rescue team that travels to battlefields via helicopter, retrieving the wounded, dying, and dead. The work is, naturally, grueling and brutal. We see (as mentioned above) only moments of the shooting war, but focus on the broken bodies of those shot or caught in tanks hit by artillery. Burns, gunshot wounds, shrapnel, missing limbs, and the screams of the dying become their world. That, and between times of moving casualties, the relative peace of flying from place to place above the battlefields below.

Eventually, Weinraub, Ruso, and their adopted team are recruited for a mission into Syria where their helicopter is struck by a missile. This brings their time in the battle full-circle, as the pair waits for evacuation by the same sort of team they had been on previously.

One fascinating aspect of the film, particularly the first hour, is the relative peace of the situation. For long stretches, we are in the helicopter with its whirring blade spinning rhythmically above. It becomes hypnotic, almost dream-like, despite the horror going on down below on the ground. It is, for these moments at least, almost as if these men are as figuratively above the conflict as they are literally above it in the air. It feels as if the war, despite the bodies and the pain and the endless IVs and doses of morphine, is happening to other people. In a way, it truly is. However, with the covert mission and the Syrian missile that brings down the helicopter, we find that war eventually comes to everyone; Weinraub and Ruso cannot remain untouched by it.

What makes Kippur so interesting is the picture of war it paints. This is a film most definitely favorable to the Israeli side of the conflict, and Israeli in this war was far from being the aggressor nation. There would be almost every justification in making Kippur a film about the glory of battle and the heroic men who protected the homeland from invaders, selflessly giving themselves to the greater glory of the Jewish people. But it does not. War, even self-defensive, unasked for war like this, is horrible, destructive, and terrible. It is mud, pain, blood, and loss.

I found Kippur and affecting film, but I also feel like I’ve been watching a lot of war films lately. I’ve looked back at my latest set of reviews and see that while I’ve watched more than typical, it’s not like it’s the only thing I’ve been watching. Perhaps war films are just staying with me longer these days and it takes fewer of them to build me back up to a point where I don’t think I can see another one for awhile. Kippur is that sort of film—it’s emotionally and mentally filling, and suggests to me that I should give war films a pass for a bit before I’m ready for another one.

Why to watch Kippur: Another side of war, and one rarely seen.
Why not to watch: At times it’s as confusing for the viewer as it is for the characters.