For whatever reason, I’ve been seeing an increasing number of subtitled films lately (and most of the ones I’m planning on seeing this coming week fit this bill as well). I’m not sure there’s a specific reason why this is, other than that about half of what I have left is subtitled. I also didn’t plan to watch a couple of films in a row that feature non-professional actors. This happens now and again—I’ll watch two films that have something interesting in common without planning things that way. 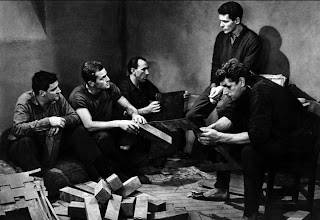 Le Trou (The Hole) is the final film of Jacques Becker, who died while the film was in post-production. The film is based on a real life event, a prison break that happened in the late 1940s in France. We spend almost all of our time with a group of five men—one is sort of the main character, but also sort of isn’t and gets that designation only because we learn a little more about him than we do about the others.

Claude Gaspard (Mark Michel) has been thrown in prison on a charge of attempted first-degree murder. His story is that his wife threatened him with a shotgun, and when he attempted to take it from her, it went off and wounded her in the shoulder. His sister-in-law, who is also his mistress, offered testimony to clear him, but a servant cancelled her testimony out, and so into the system goes Claude. Shortly after his entrance into prison, he is moved out of his cell into another one while work is done in his cell block.

Gaspard finds himself in a cell with four other men who have bonded with each other. These men are Geo (Michel Constantin), Manu (Philippe Leroy), Roland (Jean Keraudy), and a man who is called Monseigneur (Raymond Meunier). The four appear to welcome Gaspard into their group, but are a little distant, Manu in particular. The four have asked for work to give themselves something to do, and are rewarded with a stack of 5000 boxes to put together.

What soon becomes evident is that the four men have determined to break themselves out of the prison and need to decide whether or not they are going to bring Gaspard into the plan. Eventually they decide to do so, and Gaspard becomes one of the group, sharing equally in the things he gets delivered to him from his mistress.

The lengthy middle section of the film deals with the prison break itself, and we watch the men break through their floor (covering up the hole with the unfolded cardboard boxes) and then find their way down into the sewers. They discover that the actual path through has been block with a concrete plug and they determine to break through a side wall and into the sewer beyond, and then on to freedom.

The complication arrives at the end of the film when Gaspard is called into the office of the warden and told that his wife has dropped the charges against him. This doesn’t guarantee that he will be released from prison, but things are suddenly looking up for him. But then he is returned to his cell and must deal with the four men who are planning to escape from their cell that night.

Le Trou is engaging at first and at the end, but the middle is a complete drag. I find this interesting, because it reminded me a great deal of A Man Escaped, which I found absolutely fascinating. Here, I couldn’t wait for things to move on. I didn’t mind it terribly when the men break through the floor of their cell in real time—that actually made some sense, because there was always the threat of their being caught while timing their blows against the concrete as well as they could with the work being done elsewhere in the prison.

It’s really, really dull. Two of the men break out into the sewers and walk around for what feels like hours until they decide to crawl their way back into their cell. This part feels like real time, too, and I think it may have been. We don’t even get to the twist in the prison break until the last twenty minutes because everything up to then is the men bashing their way through a wall.

I don’t say this often, but it’s true—I just can’t be arsed to care about this prison break at all. It’s too slow, and moves at such a snail’s pace that by the time it gets to the end, I’d pretty much given up.

As an interesting note, The Book claims that the original version was about 140 minutes long, was then trimmed of about 24 minutes, and those missing minutes are lost forever. That may be true, but the version I watched was 132 minutes long, so I’m wondering where those minutes came from.

Why to watch Le Trou: Because prison movies are awesome.
Why not to watch: The middle is painfully slow.