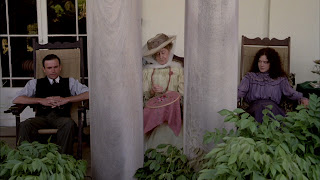 There is a character in many a period drama that I almost always dislike. That character is the “free-spirited,” independent woman. I tend to dislike this character because in the movies, free-spirited usually translates as bitchy and unpleasant. I appreciate strong female characters and I like independence. But there’s an attitude with these characters that is a bit like biting down on a piece of tinfoil for me. So I tend to be leery of them. When I discovered that a character like this was at the center of My Brilliant Career, I went in with a number of reservations.

I needn’t have. Our main character, Sybylla Melvyn (Judy Davis) is fun to be around. She’s the sort of independent I like. She’s a true free spirit, someone who wants something more than what life as a young woman in late 19th century Australia typically offers. I understand her desire to want something more than a loveless marriage that may or may not work out. Sybylla claims to be bright and clever but physically ugly, which isn’t really true. She’s not even movie ugly. In fact, the biggest problem I see with her is that she has too damn many y’s in her name.

Anyway, Sybylla has no interest in a marriage. She’d like a career, but of course actual careers for women in the time and place are not really available. More than anything, she doesn’t want a marriage, since she assumes that the only sort of marriage available to her is one that will ultimately be unpleasant and unsatisfying. Her mother (Julia Blake) decides that the family can no longer afford her, and decides to send her off to work as a servant elsewhere. Sybylla is saved from this fate (albeit temporarily) by being asked to visit her grandmother (Aileen Britton).

It is here that, despite the claim of her plainness, Sybylla is pursued by two men. The first is Frank Hawdon (Robert Grubb), who would like to marry her despite her complete indifference to him. The second is a bigger issue. He is Harry Beecham (Sam Neill), the son of a wealthy family. The two are immediately taken with each other and a sort of love blossoms between them. For her, the love is something she wants to deny—she wants to claim that the two of them are merely friends, but she’s jealous around him, and it’s evident that he’s fallen for her pretty hard. But the real truth is that despite her growing love for Harry, she still wants her own life and wants it on her own terms.

Eventually, Harry does ask her to marry him, and she denies him, telling him to wait two years until she finds out about herself a little more. As it turns out, her father has made a bad business deal and owes a great deal of money to a neighbor for a loan he can’t repay. To repay at least the interest, Sybylla is forced to act as a governess to his wild, uneducated, illiterate children. This section of the film is mercifully brief—we gather that the kids are painfully awful and that Sybylla slowly takes charge of them and civilizes them a bit before they send her away, believing that she is in love with their oldest son.

And then Harry returns. It’s been two years after all. The resolution of this is best left to first-time viewers. I won’t spoil it.

What I assumed at first would be the biggest drawback of this film, the one thing that would make me look back on this film as an ordeal turned out to be by far the best part: Sybylla herself. As mentioned above, when someone tells me that the main character of a film is a headstrong woman, I immediately think “harridan.” Sybylla shows there’s a way to be independent and headstrong without being unlikable. I completely get her as a character and understand her plight and her desire for a better life totally.

The rest of the film is pleasant enough—well filmed and attractive (although the copy I got has seen some better days and there were a few spots I was worried the tape might break). It’s nothing spectacular, but also nothing worth complaining about.

No, the first, last, and main reason to spend time with My Brilliant Career is just how damned entertaining Sybylla is. She’s genuine, believable, and completely understandable as a character and as a person. I’m a fan when a character comes to the screen who is personality first, gender second. Sybylla is as close to that as she can get, given the historical setting. She’s modern in a lot of ways. She’s resolute rather than being demanding. She’s even pleasant in her desires rather than stomping her feet if she doesn’t get what she wants.

I’m a convert on this one. I expected a rough ride, and the roughest part was a VHS copy starting to go to seed. That, friends and neighbors, is a good night at the movies.

Why to watch My Brilliant Career: A free-spirited character that’s actually worth liking.
Why not to watch: Sybylla’s nyme hys tyy myny y’s yn yt.