And the Soul of a Devil 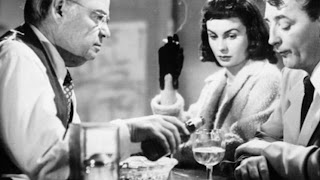 I haven’t really had much of a plan in taking out the films on The List. That’s been by design. I didn’t want to burn out on old films or get stuck in a particular rut. In general, I jump around a lot. I have focused some on the early films of the list, though. It helps with a sense of film history, of learning where later films got their ideas. So I have regularly targeted the lowest current remaining number and watched that film. I wasn’t too excited when I saw Angel Face as the low number du jour, at least until I cracked open the NetFlix envelope. I saw “Robert Mitchum” and “Otto Preminger” and “film noir” and became very pleased. Sometimes, going into a film completely cold has real benefits. (On a related note, this is one of the bad things about removing most of the early films—I’m pretty much out of noir titles, and that’s a bummer.)

Anyway, Frank (Mitchum) is an ambulance driver with his partner Bill (Kenneth Tobey). They’re called to the Tremayne mansion where Mrs. Catherine Tremayne (Barbara O’Neil) has almost died of gas inhalation. It’s the sort of thing that is easy to consider a suicide attempt, but all of the indications suggest that suicide isn’t really on the table for her. On the way out, Frank meets the hysterical step-daughter, Diane (Jean Simmons). A few mutual slaps later, and these two are hitting the town, with Frank waxing poetic about the garage he wants to build, the cars he used to race, and now and then mentioning his girlfriend Mary (Mona Freeman). It’s important that he’s begged off a dinner with Mary in order to spend the night with Diane.

Next we need to see the running of the femme fatale derby, which happens when Diane takes Mary out to lunch the next day on the pretense of trying to get Frank’s proposed garage off the ground. Mary proves herself to be something of a good egg in that she sees through Diane’s scheme right away. It plays right into Diane’s hands. Frank continues to lie about his meeting with Diane the night before. Mary ends up ditching Frank for Bill, which leaves Frank open to whatever Diane has cooking.

What she has planned is having her stepmother hire Frank as a chauffeur and having Frank drive her little sports car in a race. And, naturally, she then would have Frank all to herself. Their forbidden romance (the daughter of the homeowner does not consort with the “help”) continues to blossom, and Diane claims that if Catherine found out, Frank would immediately be fired. Diane’s stories get crazier and crazier, and Frank does the one sane thing he manages to do in the entire film: he decides to quit the job and go back to Mary. But Diane’s claws are in far too deep now. And when her father and stepmother turn up dead in an accident that could only have been caused by someone tampering with the transmission of the car, both Frank and Diane fall under suspicion. The accident, by the way, is excellent.

The best thing about Angel Face is how compact it is. It packs a lot of story into a pretty small package and there’s not a lot of wasted space here. Preminger is extremely efficient with his narrative. In my opinion, that’s exactly the way a noir should go—there should be just enough for us to get the entire story with nothing extra and nothing wasted. We don’t need red herrings or set-up shots; just give us the dirt and get right to the good stuff.

The biggest issue I have with this film is one that isn’t uncommon with films of this era—the age difference. Robert Mitchum was 35 and looked 45 when the film was made, and Jean Simmons was 23 and looked 18. It’s difficult to get my mind around it even though it’s certainly not out of the realm of possibilities. A bigger issue is that there’s not a great deal of chemistry between Mitchum and Simmons. I can’t really buy them as a couple.

This is a small complaint, though, for a film that is as emotionally compact as this one is. The plot moves along beautifully, sliding into what looks like (and probably is—I’m not telling) murder almost without warning. Like any good noir, it leaves some questions unanswered. Was Catherine really out to get Diane? Or was Diane merely the cold-hearted traditional femme fatale that we expect in a noir? There are certainly indications that suggest both as possibilities, and that suggestion is what makes the film really work.

For my money, I think Diane is all act. Maybe she isn’t, but I like the film better that way.

Why to watch Angel Face: Noir goodness at high speeds.
Why not to watch: Robert Mitchum and Jean Simmons are a very mismatched couple.