Watching Oscar: You Can't Take It with You

Film: You Can’t Take It with You
Format: DVD from Rockford Public Library on laptop. 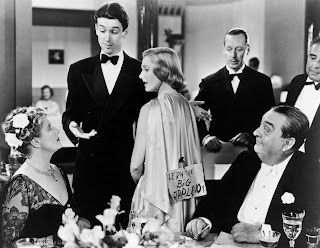 At the start of the year I decided to watch everything that had ever won Best Picture at the Oscars. It was an easy decision, seeing that finishing off The List put me within shouting distance and picking up a few others here and there brought me even closer. It was, on an already packed list, a few extra weeks of viewing. And I figured I may as well put up a review of all of them, too. Really, what’s 20,000 words, more or less. It occurs to me, though, that there’s a reason many of the films that won this particular award are no longer considered “must-see” films. And so we have 1938’s winner, You Can’t Take It with You, another big winner that has justifiably sunk into obscurity.

In the finance world, no one has the clout of Anthony P. Kirby (Edward Arnold). He’s working on a major deal that requires that he buy up 12 city blocks worth of buildings, and he’s managed to do this with the exception of a single house. That house is owned by Martin “Grandpa” Vanderhof (Lionel Barrymore), and there’s no way he’ll sell. He lives there with his collection of eccentric relatives and friends, each of whom does whatever he or she pleases at any given time, regardless of its quality, value, or use to the world at large. They’re sort of half commune and half open-door lunatic asylum, and they’re always recruiting new members.

Vanderhof’s granddaughter Alice Sycamore (Jean Arthur) coincidentally works as a stenographer for Kirby’s son Tony (James Stewart). The two have fallen hard for each other and Tony is convinced that he’d like nothing better than to marry himself into Alice’s clan of insanity. The problem is that the Vanderhof/Sycamore/Carmichael clan is made up of lunatics and there’s no way that this will go over well with his wealthy, stodgy parents. Among the clan are Alice’s parents Paul (Samuel S. Hinds), who makes illegal fireworks, and Penny (Spring Byington), who writes plays at a furious rate. Alice’s sister Essie (Ann Miller) wants to be a professional dancer despite her lack of talent. She’s married to Ed Carmichael (Dub Taylor), who plays the xylophone/marimba/vibraphone and likes to print things. There are others living there as well—Poppins (Donald Meek), recruited from Kirby’s business, who makes masks and toys. Kolenkhov (Mischa Auer) is Essie’s dance instructor. Rheba (Lillian Yarbo) andDonald (Eddie Anderson, best known as “Rochester”) are (naturally) servants. And the house is filled with thumping, constant tinny music, and random explosions.

So we start here, and meet in the middle with a disastrous meeting of the two families that ends up in jail and with hurt feelings all around. Alice wants nothing to do with bringing Tony down to her level and Tony doesn’t give a rip about his parents’ opinion of him or Alice or anything else. And since this is Frank Capra, we know we’ve got to get to a happy ending somewhere, and that said happy ending will come with a couple pounds of cheese and enough schmaltz to drown a small suburb.

But I digress (and I actually like a lot of Capra). But this one has some real issues, not the least of which is the very strange ethic it seems to offer up as truth. We’re meant to interpret the Kirbys, particularly Tony’s mother (Mary Forbes) as insufferable sticks in the mud and elitist jerk offs. That’s easy, because that’s exactly how they are played throughout. But we’re also supposed to interpret the schizophrenia clan as being heartwarmingly free spirited and lovable. And most importantly, we’re supposed to interpret them as being the sort of salt-of-the-earth Americans that have made our country 1938 great. And they’re essentially communists in terms of living arrangements and philosophy. So there’s that.

There’s also the fact that in one scene, Grandpa Vanderhof talks to a man from the IRS, claiming that he doesn’t want to pay taxes because the American fleet of battleships is an unnecessary expense—a sentiment that certainly rang false a few years later. But hindsight is 20/20 and I can forgive this interesting bit of trivia.

What I can’t forgive is the overriding philosophy of the clan, though. In one moment, dance instructor Kolenkhov tells Grandpa that Essie is actually terrible at dance (we learn throughout the film that everything “stinks” in his opinion). That’s not the problem. What is the problem is Grandpa’s reply that it’s fine that she’s terrible as long as she’s having fun. What’s so bad about that? We’ll Essie has announced to us early in the film that it’s her intent to be a professional dancer. So encouraging her if she has no talent is a good thing?

Look, my older daughter played AYSO soccer for a couple of years. She was never very good at it, but she enjoyed it, and we spent our Saturday mornings together at her games and afterwards eating eggs and pancakes in a local restaurant. Those were fun mornings and fond memories. But if my daughter were old enough to be married, still had virtually no talent, and suddenly insisted that it was her dream to play on the U.S. Olympic soccer team, I’d be falling down as a parent if I let that sort of impossible dream continue. As it happens, my daughter does want to dance ballet professionally, and she’s got a good chance of doing so. If she didn’t have the drive and talent, I’d still let her dance, but we’d be having some serious conversations about reality. And if she were 10 years older, those conversations would be far more serious.

And really, that’s the issue here. The film’s basic philosophy is that people should only do the things that make them happy. I agree that doing things to make you happy is important—that’s the main reason I keep this blog. It’s for me more than anyone. But I also have responsibilities and have to do things like laundry and cooking that I frequently wish I didn’t have to do. Because that’s life. If everyone lived by the idea espoused in this film, we might be happy, but we’d also likely starve to death in a couple of years.

In short, this film’s biggest issue is that its ideas aren’t merely bad, they are significantly dangerous. And I could forgive even that if I didn’t want to reach inside this film and slap everyone (except maybe Alice and Tony…and maybe them, too) repeatedly across the face until they either pull the cattle prod out of their asses or stop being walking ids needing constant gratification. Its one saving grace is the speech by Tony near the end, which is the purest form of the philosophy the film espouses, or at least the most realistic form, but it’s not enough. It’s too little, too late.

Final note: how interesting that Lionel Barrymore plays the exact opposite role in It’s a Wonderful Life. I’d sort of love to see those two characters go head to head. Equally interesting is that there is also has a passing the hat scene much in the spirit of that film as well.

Why to watch You Can’t Take It with You: Frank Capra was a national treasure.
Why not to watch: The phrase “Capra-corn” exists for a reason.