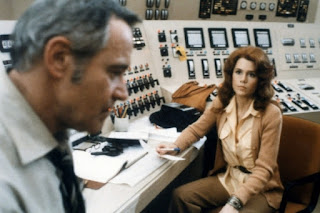 I think I must have been sort of a weird kid. Actually, I know I was a pretty weird kid, but that seemed to express itself in my movie choices. I can remember seeing The China Syndrome as a kid, which means I saw this when I was 11. Why the hell would an 11-year-old kid want to see The China Syndrome? I have no answer for that except to say that evidently, I was that kid. This was a pattern—I saw Chariots of Fire in the theater by myself, and I also remember seeing, of all things, The Falcon and the Snowman. What the hell was I thinking? On the other hand, I also saw Star Wars in the theater almost 20 times. Actually, that’s pretty weird, too.

Anyway, The China Syndrome is a film about an almost-accident at a nuclear power plant that turns into both a scare and a scandal. It’s a solid film with some very good performances, but it also benefited greatly from timing. When the film was released, the idea of a nuclear power plant disaster was not really in the mind of the public, but less than two weeks after its release, the incident at Three Mile Island happened. Suddenly the idea of nuclear disaster was on the minds of everyone, and The China Syndrome reaped the enormous benefits.

Kimberly Wells (Jane Fonda with from-a-bottle auburn hair) does light news for a television station in California. She’d like to move into more hard-hitting stories, but her popularity as the soft news person at her station keeps her in the role of covering birthday parties for tigers at the zoo and animal fashion shows. One of her ongoing projects is a series of stories on the energy industry in California. For one of these, she takes her crew, cameraman Richard Adams (Michael Douglas) and sound engineer Hector Salas (Daniel Valdez) to the Ventana nuclear plant near Los Angeles. While they are there, an incident happens in the control room. As lay people, they have no idea what is going on, but it looks serious. Bill Gibson (James Hampton), who is giving the tour, asks them not to film, but Adams films the scene on the sly. What they see is panic from shift supervisor Jack Godell (Jack Lemmon) and his number two, Ted Spindler (Wilford Brimley).

What happened was a stuck valve and a misread gauge. They thought that there was too much coolant in the reactor when there was almost none at all. The nuclear core almost became exposed, which would have created a reaction that they would have been unable to stop. Should that happen, the core would melt its way down into the ground, theoretically all the way to China (hence “The China Syndrom”). In reality, once the core hit the water table, radiation would spread over a massive area, essentially nuking Los Angeles.

While terrifying in and of itself, Godell does a little investigating work on his own and discovers that many of the initial documents for the creation of the power plant were faked. In particular, the pictures of the welds on the various pumps are all the same, and one of those pumps is leaking radioactive water into the plant. Another shutdown at full power could cause the reactor core to go critical. No one wants to listen, though, because doing anything to check the welds would keep the plant offline, cost millions of dollars, and delay the opening of a second nuclear plant. Any attempt to find out more results in serious threats. Eventually, feeling he has no alternative to keeping the plant shut down, Godell takes over the control room, holding everyone hostage with the threat of exposing the core until he can get his message out to everyone, and he chooses Kimberly Wells as his spokesperson.

In addition to its impeccable timing, The China Syndrome has a few important things going for it. First and foremost, it has some tremendous performances. Jack Lemmon is always compelling as an actor. He’s such a natural with comedy that it’s easy to forget just how good he is in dramatic roles. It’s also one of the best performances of Jane Fonda’s career. It’s evident through much of the film that Kimberly Wells is a little (just a little) out of her depth, but she’s determined not to be taken as a bubble-headed news twit. She wants this story and is willing risk a lot to get it. The performance I remembered the best, though, was Michael Douglas. In particular, it doesn’t seem like a Michael Douglas role, but he fills it beautifully.

The second important factor is that it’s scary as hell. The China Syndrome isn’t horror movie scary, but it’s plenty terrifying in its own way. The modern world (even the “modern” world of 1979) is filled with things that can kill us that we have no control over. The threat of nuclear doom was always evident in those days. I can remember making plans of what I would do when (not if) the big war happened. The China Syndrome played on those fears a multiplied them; nuclear doom could happen because of human error, greed, and stupidity. We were always vulnerable.

As it happens, I live now in the distant shadow of a nuclear plant—I see it in the distance most days on my commute to work. I think for a few weeks at least I might take back roads, if only to prevent myself from the constant awareness of the plant a few miles away. I don’t really worry about it too much—there are so many safeguards put in place—but then again… The whole point of this film is that people will always take the easy and cheap way out, even if it means putting thousands or millions at risk. The China Syndrome is a reminder that too safe still isn’t safe enough.

Why to watch The China Syndrome: A terrifying look at what could happen.
Why not to watch: The ending is a bummer.