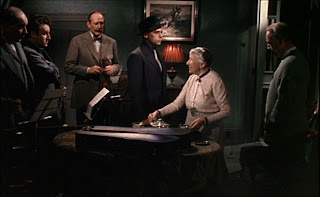 How come Alec Guinness doesn’t get the props he deserves? I mean, if you look at the actors of his heyday, he might well be remembered, but certainly not with the same sort of reverence as an actor like Olivier. However, Guinness was much more versatile. He was capable of more than most actors of his time, and in fact most actors of today. A case in point is a film like The Ladykillers, a black comedic little number that puts Guinness in the guise of a criminal mastermind, a vastly different role from his criminal neophyte of The Lavender Hill Mob and just a year or two before his triumph in The Bridge on the River Kwai. Guinness was a cinematic chameleon every bit as versatile as someone like Peter Sellers, but with less recognition that he had that skill.

In The Ladykillers, Guinness plays “Professor” Marcus, a criminal genius set on stealing a massive amount of money with his four associates, the constantly worried Major Courtney (Cecil Parker), the smooth Robinson (Peter Sellers), the nervous hitman type Louie (Herbert Lom) and the loutish muscle man One Round (Danny Green). The caper is a simple one. They manage to block off traffic both behind and in front of an armored car, disable the guards, and stash the four suitcases of loot into a massive steamer trunk. The trunk is then wheeled into the train station.

And here’s the genius part: as cover for their activities, the five men are masquerading as a string quintet. They practice in the new rented room of the Professor. Mrs. Wilberforce (Katie Johnson) lets him the room and enjoys their “playing” (it’s actually just records they play to cover their scheming) so much that she’s more than willing to pop down to the train station and pick up the large steamer trunk the Professor is expecting from a friend—the steamer trunk filled with cash they snuck in, of course.

It doesn’t go perfectly, of course. Mrs. Wilberforce is far too much of a busybody, and almost ruins the heist when she stops her cab on the way back with the trunk to “rescue” a horse that has taken it upon itself to strip a greengrocer’s cart of everything edible. Eventually, though, the case winds up in the right place and the five men split the loot. As they’re leaving, though, the celoo case splits open, money flies everywhere, and suddenly Mrs. Wilberforce realizes that these five men are actually crooks. I’d say the movie takes a dark turn here, but it really doesn’t. It takes a darker turn as the men realize that they need to kill the sweet little old lady to keep her quiet, but it also becomes evident that none of them relishes the task or wants to perform it.

The Ladykillers is not quite a comedy of manners, but it certainly leans that way. When the money is revealed to Mrs. Wilberforce, the criminals retreat back into her house to determine what to do. As it happens, this coincides with a tea party Mrs. Wilberforce is hosting, and as the men panic, little old ladies keep showing up, making the situation direr for them and more ridiculous for the audience. It’s not until one little old lady shows up with a paper reporting the robbery that Mrs. Wilberforce actually twigs to what is going on, adding additional insult to the situation: had the robbers simply driven off, they would have likely been fine. This is wildly entertaining, as these tiny little clucking hens keep walking into the conversation as Mrs. Wilberforce attempts to dress down her former lodgers. And for her, it’s all about social standing. She doesn’t like the robbery, of course, but is more concerned about the possible embarrassment of being seen in the company of criminals by her oldest, closest, and dearest friends.

Of course, what happens instead of the simple bump off of the sweet old lady is that the five men begin turning on each other, each one desperate to get away with his share of the loot, and implicate the others. It’s a given that the little old lady will come out on top, of course—that’s what makes this a comedy. No, it’s really all about the how, not the what. The joy is not in determining that the men will get their deserved comeuppance, but in seeing just how Mrs. Wilberforce gets through the second half of the film with her neck intact.

For his part, Guinness plays his role like a Dickensian villain, almost always clad in a dark black coat and a huge scarf. His voice is unmistakable, of course, but the large, protruding false teeth, hunched posture, and sunken eyes give him a look of cartoonish malice perfect for the part. Unlike his four associates, he is constantly genteel and cultured, but he looks anything but.

On a technical side, The Ladykillers very much looks its age, with some needless and very suspect rear projection work. On a similar note, the film is very much a product of its time (and a likely reason why the remake fell as flat as it did, regardless of the star power of Tom Hanks and the direction of the Coens). The little old ladies who exist today aren’t the same sort there were in the 1950s. Today, those little old ladies were at Woodstock and have internet connections. The plot requires a particular sort of innocence and naivety that doesn’t really exist anymore.

And so, while The Ladykillers looks and feels its age, it’s nonetheless a charming reminder of a time that was. It’s a comedic film noir in its own way, with its aged femme fatale and cast of thugs more silly than severe. It’s still a joy, even though it’s not the film it once was.

Why to watch The Ladykillers: It’s funny in a way most films aren’t.
Why not to watch: It shows its age, and the remake didn’t do it any favors.