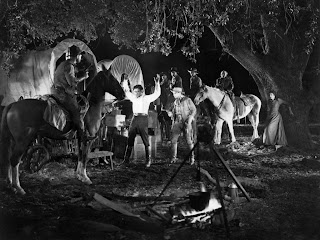 It would be really easy for me to say rude things about Cimarron. It was the first Western to win Best Picture (and it’s only marginally a Western), and it evidently left such a bad taste in the collective mouth of the Academy that another film from the genre didn’t win until 1990. And it’s not even a real Western; it just takes place in the Old West. There’s a single shoot out, a lot of posturing, and something that I flat can’t make a lot of sense of. But times have changed. A film like Cimarron, made today, would be vastly changed from this version.

In addition to being the only Old West film to win in the first 60+ years of Oscar history, Cimarron is also the only Best Picture to lose money on its initial release, and it lost a lot. That’s what you get for producing a big-budget film in the middle of one of the worst years of a terrible economic depression. But hey, it won the top prize, and for that reason alone, it has some historical significance.

Yancey Cravat (Richard Dix) has signed himself up for the Oklahoma land rush, and has his eye on a prize plot of land. The starting gun is fired (and I really have to admit that this scene is pretty special, particularly for the year in which it was filmed) and off rushes everyone to claim what parcels of land they can. Yancey is tricked by former fallen woman Dixie Lee (Estelle Taylor) and he is forced to return home to Wichita empty handed. It is here that we meet his wife Sabra (Irene Dunne) and learn that Yancey is the editor and publisher of a local newspaper, the Wichita Wigwam. Not content with the results of the land rush, Yancey aims to return to Oklahoma and set up his paper there, taking Sabra and their young son Cimarron to start a new life.

And so they go. At one point on the trip, they are held up by a man called The Kid (William Collier, Jr.), who knows Yancey, and thus lets him go. The family arrives in Osage and sets up shop. Yancey soon becomes one of the most important men in town, and Sabra learns to appreciate Osage, Oklahoma for what it is. Yancey guns down local thug Lon Yountis (Stanley Fields), making him something of a legend. Later, when The Kid arrives to shoot up the bank, Yancey guns him down, cementing his reputation.

But with this reputation comes very little in the way of cold, hard cash. When the second land rush is announced, Yancey can’t help himself and leaves to try again, keeping Sabra at home to continue to run the paper, now dubbed the Oklahoma Wigwam. Sabra is aided by printer Jessie (the stuttering, rubber-faced Roscoe Ates) and Jewish peddler-turned-shopkeeper Sol Levy (George E. Stone), who was befriended by Yancey soon after his arrival in Osage. Sabra, left on her own, becomes a society dame, assisted by hawk-faced Felice Venable (Nance O’Neil).

Former comfort woman Dixie Lee has moved back into town as well, having been run off her land by those offended by her past. The townspeople aren’t any happier with her presence and Sabra soon finds a way to take Dixie to court to get her run out of Osage. Almost as if by plan, Yancey finds this moment to return after five years tromping around Oklahoma. He defends Dixie in court, earning him Sabra’s temporary enmity, since she is convinced that he’d been canoodling with her the entire time. A couple of choice words in his dulcet tones, though, and Sabra is once again brought back in line.

And then there’s oil, and the natives pushed back onto a reservation have the lion’s share of it. Yancey at this time is running for governor and is a champion for the rights of the native people. Offered a chance to rob them of their oil money, Yancey balks, a move that costs him the governorship but saves the land for the natives. And he vanishes again, unable to control his wanderlust or stay in the same place for long. Again, he leaves Sabra to fend for herself and run the paper without him while he’s off doing whatever someone named Yancey Cravat does when he isn’t at home.

This is a strange film in a lot of ways. There isn’t so much a plot as there is a series of events in the lives of these people. Richard Dix may get top billing, but it’s Irene Dunne who is the emotional center of the film. Except at the start and that first land rush scene, it is Sabra who stays with us for the bulk of the film. When Yancey disappears, it is Sabra who we learn about and Sabra’s successes that concern us. We see Sabra grow and change, becoming a woman of prominence and eventually being elected to Congress thanks to her tireless efforts on behalf of the people of Oklahoma—efforts that are made with the conspicuous absence of her larger-than-life husband.

I’m honestly not sure what we’re supposed to think of Yancey Cravat. Through the first half of the film, it is absolutely certain that he is the hero and that we are to look upon him as something like a Western Hercules, capable of any feat of will or daring. And yet he frequently buggers off to the wild, leaving his family in the lurch completely. Sabra constantly argues with him about points that make complete sense—he refuses the vast reward money for killing The Kid when it would have set the family up for life. No, Yancey instead decides to stand on his principles…and then he leaves. He’s a big, blustery blowhard. Frankly, he comes off as sort of a douchebag.

The film also suffers from the sort of overacting common to films of the era. It’s plainly evident that a lot of these actors got their start in the silent era, since everything is played for its melodramatic best. It simply doesn’t play well to an audience more used to subtleties. In an effort to be as grand as the wide open spaces, it falls flat. And speaking of wide open spaces, with the exception of the opening land rush, this entire film takes place indoors, just about. The landscape certainly could have been used to great effect, but it’s almost entirely ignored.

The land rush is great, and more than anything, that scene is worth watching. The rest of it? Well, it’s not terrible, but it’s also not that fantastic. There’s a good reason that IMDB currently lists Cimarron as the Best Picture winner with the lowest rating. You could find a lot worse, but there’s certainly better out there, too.

Why to watch Cimarron: Well, it did win Best Picture.
Why not to watch: Yancey is a dick, and Sabra is dumb enough to keep taking him back.