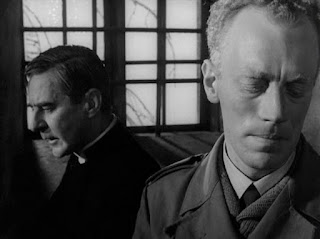 I find the films of Ingmar Bergman interesting for a number of reasons. The primary one, I think, is that so much of Bergman is infused with religion and religious imagery while so frequently being about people struggling with living in a world they envision without a god. Bergman liked the pain of existentialism, the search for meaning and purpose in an uncaring and indifferent universe, and particularly that key moment of struggle when the people in question discover their own lack of faith in what may or may not be in the world beyond this one. Nowhere is this clearer than in Nattvardsgasterna (Winter Light) where even those who have dedicated themselves to a life of faith find that their faith is unable to withstand the burdens of the world.

Tomas (Gunnar Bjornstrand) presides over a very small rural flock in his church. The film opens with a service attended by a small crowd of people. This crowd includes local fisherman Jonas Persson (Max von Sydow) and his wife Karin (Gunnel Lindblom). When the service ends, Jonas speaks with Tomas about his own worries and fears. In particular, Jonas is upset that the Chinese are working on an atomic weapon, a reality that fills him with abject terror. Tomas is also confronted by Marta (Ingrid Thulin), a former lover who also happens to be his antithesis, as she is an atheist. Tomas is only able to give her part attention, since he is concerned about his ability to minister to Jonas Persson—just as Jonas has lost faith, Tomas finds himself without hope or solace.

And then we get one of the most startling scenes I’ve seen in some time. Marta has left Tomas a letter, and he goes to read it. Rather than seeing the letter or hearing her voice, the camera instead focuses on Marta as she relates the contents of the letter to us as if she were speaking the words to Tomas. It is brutal because the letter she has written is brutal. Essentially, she admits her love for him and accuses him of cold indifference to her, relating a story of a medical issue she had the year previous that caused him to turn away from her.

The heart of the film comes when Jonas returns to speak with Tomas at length about his existential dilemma of living in a world where destruction can come at any time from people who may have nothing to lose by destroying everything. Tomas, in attempting to counsel Jonas and his evident suicidal tendencies and ends up talking himself out of his own belief. Tomas relates his experiences in war, saying that as he encountered the atrocities common in war, he simply ignored them as a way to reconcile his own faith. He admits that life may well be easier, or at least more understandable without reconciling it with God—without God, human suffering and cruelty needs no explanation. This talk has a serious and unintended consequence: Jonas leaves and shoots himself, leaving Tomas to deal with the repercussions of his own crisis of faith, which encompasses the third act of the film.

A great deal of the effect of Nattvardsgasterna is the overall look of the film. The church in which a great deal of the action takes place is incredibly stark. The decorations that exist are of the most disturbing religious iconography available. Tomas and Jonas, for instance, meet in front of a massive crucifix holding a gaunt Christ looking both mournfully and accusingly over Tomas’s shoulder as he fails to console his struggling parishioner. The church is filled with images of death, all seemingly religious and harkening back to a medieval time, but now seeming to signify the literal death of Jonas and the metaphorical death of Jonas’s faith. It’s no mistake that Tomas declares himself finally free, then breaks down in a fit of coughing. It’s no mistake either that just as he declares himself free, he realizes that he needs to prepare for his next sermon, and then discovers that Jonas has taken his own life.

Nattvardsgasterna is a striking and powerful film. It asks perhaps the most compelling religious question that can be asked by the faithful and non-faithful alike: how can the utter silence of God be explained? It hints at further questions as well, like how can faith be justified in the face of such silence. Bergman seems to think that it cannot be, and yet he also cannot allow Tomas to stop himself from going through the motions of belief and continuing to put on the pretense of faith up until the bitter end, preaching to an empty church housing only those who no longer believe in the teachings. It is all ultimately empty.

This is not a film to be viewed lightly, despite its short run-time. Nattvardsgasterna is a film that remains in the back of one’s mind, coyly reminding us that there are no answers save the answers we create ourselves, and even those answers really count for nothing.

Why to watch Nattvardsgasterna : It asks the right questions.
Why not to watch: It tries hard to shake the faith of any who watch it.