Betting Against the House 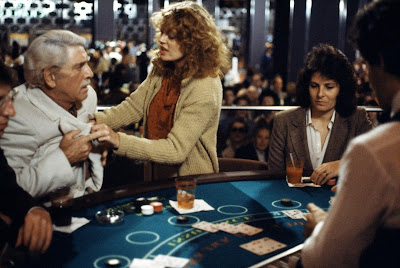 Film noir is an American film style, but it was defined by the French. That being the case, it’s not that surprising that a French director would pick up on the style and do something with it. What Louis Malle decided to do was make Atlantic City, a very strange neo-noir. This is an odd movie, one that manages to strike at the heart of what a noir should be but also turns out to be something different.

It starts with a guy named Dave (Robert Joy) stealing a package of drugs from a pickup in Philadelphia. He takes the package to Atlantic City in the hopes of making money by selling off what he’s found. There’s a part of him that realizes that he’ll be pursued, so he looks for a way to ditch the stash quickly. It doesn’t help that he’s got the additional baggage of Chrissie (Hollis McLaren), who is pregnant. In Atlantic City, they hunt down Sally (Susan Sarandon). This is awkward because Sally is simultaneously Chrissie’s sister and Dave’s wife.

Sally lives in a dive across the way from Lou (Burt Lancaster). Lou fancies himself a faded gangster who was once a big deal, but he was never more than a low-level thug for the mob. He lives in Atlantic City running numbers for small change and taking care of Grace (Kate Reid), the wife of his deceased former boss. Lou has a bit of a crush on Sally.

All of this matters because Dave eventually settles on Lou to be the man who delivers the drugs to a buyer he finds. Dave then immediately runs afoul of the mob who he stole the drugs from in the first place and winds up the victim of a fatal case of having a knife in his stomach. Now Lou has the drugs and the money from the sale, and, with the death of Dave, a way into Sally’s life. He forces his way in by taking care of the funeral arrangements for her husband and buying her flowers.

Thanks are guaranteed not to go well, of course. With Dave dead, the mob is after Sally, and soon switches to Lou, putting the two of them in mortal danger. And it becomes more and more apparent that Lou’s past as a heavy hitter in the mob is nothing more than his own personal flight of fancy and he’s barely able to take care of himself let alone anyone else.

All of this takes place in front of the faded and decaying backdrop of Atlantic City. The film takes place in the days when the city had lost all of its appeal as a resort. Its resort hotels had faded away and were mostly scheduled for demolition. Gambling had just come to the city along with the organized crime. It’s the perfect backdrop for the faded and decaying lives the film portrays.

Atlantic City is a strange noir. It doesn’t conform to all of the elements of a film noir, but it certainly has enough of them to qualify. There’s a sense of loss that runs throughout the film that is impossible to ignore. Everyone in the film believes him- or herself to be something more than he or she is, or destine for something more. There’s also a real sense of naivety running through everything. Everyone in the film, at least in terms of the main characters, is far more innocent than they let on. This is most completely realized in the character of Chrissie, but is a part of all the rest as well.

The loser element is the most dominant theme in the film. Grace is demanding and cruel, believing herself to be the widow of a powerful man in the mob, but it’s likely her husband was little more than a mid-level boss. Lou claims to have been the cellmate of a powerful gangster, but it turns out it was for 10 minutes while the gangster was being transferred. Sally wants to deal cards in Monte Carlo despite the fact that there are no female dealers in the city. Everyone is wrapped up in delusions of grandeur regarding their past or future, and no one lives in the present. It’s as if all of these characters have stepped out of a Warren Zevon song.

If there’s an element that doesn’t work here, it’s the early May/late December romance between Sally and Lou. This is eventually a consummated relationship (we are thankfully spared from seeing this consummation) and it doesn’t work at all. Sure, Sally is vulnerable, but Lou is old enough to be her grandfather. It just doesn’t fly. What’s more, it’s not that necessary to the workings of the plot. Everything that happens is still believable with Lou nursing a crush and acting like a doting parent rather than a lover.

Despite this, Atlantic City is a worthwhile watch. There’s a reason it was nominated for the five big Oscars that year.

Why to watch Atlantic City: As good a modern noir as you’ll find.
Why not to watch: The romance doesn’t work as well as the film wants it to.