Films: The Pawnbroker
Format: DVD from NetFlix on The New Portable. 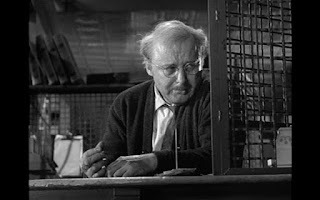 One of the reasons that I discuss Oscar categories here the way I do is because of the way that Oscar functions. The Pawnbroker is a good example of this. I haven’t yet looked at the Best Actor race for 1965 because I didn’t have this review up, but it’s a consensus that Rod Steiger should have won this Oscar. Instead, it went to Lee Marvin because the Academy (rightfully) wanted him to have an Oscar, but in this case, he got it for Cat Ballou. Steiger didn’t win here, so he won in 1967, preventing Paul Newman from winning for Cool Hand Luke, which eventually led to Newman winning for The Color of Money. This is why I do what I do.

The Pawnbroker is the story of Sol Nazerman (Steiger), who runs a pawnshop in New York. As the film progresses, we learn that Nazerman is a Holocaust survivor and that he lost his entire family in the concentration camps including both of his children and his wife. Now, he has done everything he can to shut himself off from all emotion. Sol Nazerman has learned that emotions are a weakness and cause pain, and now he cares only about money. This is despite the fact that the pawnshop tends to put more money out than it takes in, something Nazerman’s owner Rodriguez (for lack of a better word, played by the butter-voiced Brock Peters) appreciates, since it makes the pawnshop a tax write-off.

The pawnshop has a number of regular customers whom Sol has learned to know quite a bit about. He knows their addresses and in some cases he knows or at least suspects their reasons for pawning items for a few dollars to get through the day. Sol doesn’t care about the people; he just wants to get the items in question for as little as possible, typically offering a perfunctory $2 for whatever is brought in to the shop. He also has an employee named Jesus Ortiz (Jaime Sanchez) who seems to think that Sol Nazerman is a genius in everything he does. It’s Ortiz’s goal to own his own shop someday, and every day when the store closes, eh attempts to learn something at the foot of the master. For Ortiz, this is about the future and also about the chance to get his girlfriend (Thelma Oliver) out of the prostitution racket. Sol sometimes clashes with Tangee (Raymond St. Jacques), Buck (John McCurry), and Robinson (Charles Dierkop), who frequently come in with hot items that Sol refuses to pawn.

Sol’s daily grind of handing out a couple of bucks to the people he sees as rejects and scum is thrown into a small loop with the arrival of Marilyn Birchfield (Geraldine Fitzgerald), a new local social worker who appears to be a soft touch for any sob story and the height of empathy. And perhaps it is her or perhaps it is discovering that Rodriguez uses the pawnshop as a money launderer for a prostitution ring that causes Sol Nazerman to start seeing flashes of his old life and of the traumas that caused him to shut off emotions from his consciousness. His constant rebelling against his natural emotions is what causes him to dismiss Ortiz as just another reject and more scum, which is what causes Ortiz to want to rob the shop, leading to the devastating third act.

For a film that earned just a single Oscar nomination, The Pawnbroker has a hell of a lot going for it. Sidney Lumet managed to be overlooked, as did the cinematography that had the fascinating idea of lining Nazerman’s pawnshop with cages and wire grills, always placing the man behind bars. That this time they are of his own making is of no matter—it’s clear from the way the scenes are shot that Sol Nazerman is still in one sort of prison or another. I like the constant refrain of Nazerman being called both “professor,” a nod to his job in Germany before the war, and “uncle,” probably reminiscent of his perceived age. Geraldine Fitzgerald is heartbreaking here, certainly worthy of at least consideration for a supporting role. This also has a Quincy Jones soundtrack, and clearly could have been nominated on that front as well.

Instead, we are left with Steiger, who makes a meal of this role. One of the knocks against Steiger is that he was so much more prone to playing everything with bombast and fire. Sol Nazerman isn’t that sort of role, and while there are moments for Steiger to emote with the best of them, he plays the role as closed off to the world around him, which is exactly what the role really needs.

The Pawnbroker is not an easy film. It’s one that calls up a lot of unpleasant ideas and images, but does it in a way that demands to be seen. Once. I’m not sure I want to watch it again any time soon.

Why to watch The Pawnbroker: This is what Rod Steiger was capable of doing.
Why not to watch: It’s a one-and-done film.