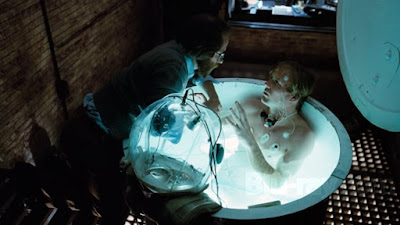 I know I’ve seen Altered States at some point in the past, although it’s been years. I remember the vague outlines of the story and a few of the details, but I’d lost quite a bit of it. I didn’t realize that Altered States was based on a Paddy Chayefsky novel; I did remember that it was directed by Ken Russell. It’s the sort of movie that is obviously directed by Russell, or possibly David Cronenberg. It’s perhaps closer to suggest that it’s clearly Russell possibly influenced by Croenenberg’s stylish body horror.

Eddie Jessup (William Hurt) is an abnormal psychologist studying schizophrenia. This leads him to the belief that schizophrenics are not necessarily insane, but somehow experiencing a different form of consciousness. In his work with his patients, he uses a sensory deprivation tank, finding the experience to be very much like entering a hallucinatory state from which he has only vague memories. Around the same time, he meets Emily (Blair Brown), a PhD candidate in anthropology. Eventually, the two get married.

Jump forward seven years. The Jessups now have children and are martially unhappy, their different careers and desires moving them in different directions. At a party, Eddie reconnects with Arthur Rosenberg (Bob Balaban) and recalls their earlier sensory deprivation work. He also learns about a tribe in Mexico that uses psychedelics in their religious rituals. He partakes in the ritual, has a massive trip, and returns to the States with a bottle of the hallucinogenic mixture to use in further experimentation. Eventually, this comes to the attention of colleague Mason Parrish (Charles Haid), who joins in the research over his own objections. Eventually, unable to continue increasing his doses of the drug, Eddie goes back to using a standard dose while in the deprivation tank.

In a small sense, Altered States is sort of a precursor to a film like Videodrome in the way it handles body horror. What happens to Eddie is that these trips in the deprivation tank more or less physically devolve him into earlier human states. His body undergoes radical physical changes, and at one point he emerges from the tank as a proto-hominid (played by Miguel Godreau), although he eventually reverts to his normal human form. Further experiments mutate him more, sending him further back to more and more primordial states of consciousness. And eventually, he no longer needs the deprivation tank to have these transformations occur.

Sadly, this is where Altered States goes completely off the rails for me. I’m willing to deal with a whole lot of nuttiness in my science fiction films if I need to, but when something goes this far beyond the pale in terms of actual science, it loses me. The last 20 minutes or so of the film appears to, at least in part, really want to create the sort of tunnel of light sequence from 2001: A Space Odyssey but with a lot more surrealism and hallucinatory elements. This eventually becomes something very much like an experimental film gone wrong, and the concluding act of the film is a mess of weird ideas, bad science, and drug-fueled imagery.

I think the biggest problem with Altered States is that there simply isn’t a way to clearly or naturally depict what the story wants to get to. Having Eddie Jessup revert physically to a proto-human and go on a short rampage through Boston works. It’s crazy, but it makes sense. Having Eddie Jessup revert to some sort of vague idea of proto-consciousness in physical form simply doesn’t work at all. The technology didn’t exist in 1980 to make this even remotely feasible, and it may still not. It completely loses its way, and when it does, there’s not enough time to pull it back from the brink.

I really want to like Altered States a lot more than I do. As it happens, there’s a reason that I had only vague memories of it, and a reason I hadn’t watched it in a long time. I don’t dislike it as a movie. In fact, the first 80 minutes of it are interesting and bizarre in the way that only a Ken Russell film can be. The end is a huge detraction, though. It can’t bear the weight of the story and the implications that are desired here simply don’t wash.

It’s worth it for the head trip, but the drug wears off too quickly.

Why to watch Altered States: There’s no head trip like a Ken Russell head trip.
Why not to watch: The ending is off the rails.