Ten Days of Terror!: Valerie and Her Week of Wonders

Films: Valerie and Her Week of Wonders (Valerie a Tyden Divu)
Format: Streaming video from Kanopy on laptop. 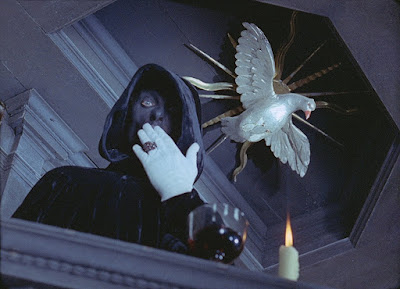 I’m at a loss for describing Valerie and Her Week of Wonders (or Valerie a Tyden Divu in the Czech). I suppose at least a partial explanation is that it’s a part of the Czech New Wave. There are elements of surrealism here, which reminded me a great deal of Daisies. It’s also very sexually charged, and since the main character is a 13-year-old girl, there’s a high creep factor. A lot of it doesn’t make a great deal of sense without a lot of thought, which reminded me of Hausu. And some of it, not favorably, reminded me of the pure insanity of The Color of Pomegranates.

Valerie and Her Week of Wonders is a non-linear film, sort of. Actually, it’s a lot closer to a dream. Our title character, Valerie (Jaroslava Schallerova) is 13 and has just experience menarche (look it up), which is really what I think this entire film is about. A thief steals her prized earrings and then returns them. Valerie lives with her grandmother (Helena Anyzova) because her parents have died. Valerie is also seeing visions of vampire-like monsters, specifically one called the Constable (Jiri Prymek).

Our earring thief is a young man named Orlik (Petr Kopriva; “Orlik” is translated as “Eaglet” in the captions). It’s clear that Orlik is attracted to Valerie, and it’s also evidently the case that he is Valerie’s brother. He claims to be the son of the Constable, but the Constable also tells Valerie’s grandmother that he is Valerie’s father as well. There’s also a missionary named Gracian (Jan Klusak) who may have been the former lover of Valerie’s grandmother, and who also finds himself driven to sexual distraction by Valerie.

You know what? Valerie and Her Week of Wonders kind of defies a logical plot description. You’d be better off looking at the Wikipedia page than having me try to parse it for you.

Unfortunately, that doesn’t leave me with a great deal to talk about, since plot tends to be my main concern in these reviews. What we have left, then, is the various performances, the aspects of filmmaking, and interpretations. For a couple of these categories, there’s not going to be a great deal to say either. The performances are what they are. It’s a very stylized film, very much centered in the Czech New Wave, and thus not the sort of thing that comes across as a normal performance. Since the film is essentially a dream, the performances reflect that.

In terms of the aspects of filmmaking, Valerie and Her Week of Wonders is, again, dream-like. It’s well made in the sense that Jaromil Jires is a competent director and knew what he was doing. But again, because things are so stylized, it’s almost hard to tell what is really going on. There are aspects of storytelling here that I take issue with because it’s frequently unclear what is going on.

There’s a good deal of sex here, and that is something that, in this case, I find problematic. A lot of that sex is directed at Valerie. She is, more or less, a Lolita figure in the world of the film, causing virtually everyone who sees her, man or woman, to go berserk with lust. At one time or another, Valerie is kissed sexually or approached in a romantic manner by someone alleged to be her brother, her grandmother post-vampiric bite and restored to youth, her mother returned at the end of the film, Gracian the missionary, and the Constable, her alleged father. The fact that so many of these encounters are potentially or clearly incestuous is additionally troubling.

What that leaves us with is interpretation. The easy interpretation, of course, is that Valerie reaches womanhood at the start of the film, and thus what we are seeing relates to that. It’s a surreal coming of age story. That works as a base interpretation, but it’s also not very satisfying when there are so many other potential ways to take the story. That said, this is clearly a part of it, the sort of thing Jires could have claimed was the intent if anyone seeking deeper political meanings might have asked.

Are there deeper meanings? I think there very well could be. The incestuous nature of the various relationships may be a dig at communism in general and the Soviet control of Czechoslovakia in the specific. Everyone wants to get his or her hands on young, virginal Valerie and use her for their own ends. If Valerie represents Czechoslovakia, the rest of this reading sort of paints itself, doesn’t it? The parent in this case would be the Soviet Union, creating the communist version of the Czech state and, essentially, raping it.

I can’t say I loved this, but I didn’t hate it. It was interesting, at least, and sometimes that’s enough.

Why to watch Valerie and Her Week of Wonders: The Czech New Wave is important.
Why not to watch: Much of it defies easy explanation.

Email ThisBlogThis!Share to TwitterShare to FacebookShare to Pinterest
Labels: fantasy, horror, Jaromil Jires, Valerie a Tyden Divu, Valerie and Her Week of Wonders