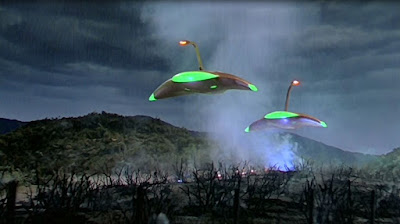 There’s a few things you need to know going into the 1953 The War of the Worlds and my relationship with it. The first is that I know and love the Wells story it’s based on, and I think the Orson Welles radio version is one of the greatest pranks of the last 100 years. Second, it’s important to note that one of the main characters is named Dr. Clayton Forrester. If you understand why that is important, you understand why it’s kind of hard to watch this without a smile every time he says something all science-y.

If you don’t already know, the basic story here is that Earth gets invaded by creatures from Mars that show up initially in ships disguised as meteors. After the ships cool down, three smaller ships emerge from each one and start laying waste to everything with heat rays that can only be described as being the height of 1950s special effects. The intrepid humans do their best to fight back as best they can, learning that the alien machines are impervious to everything, and leaving the humans with no recourse but to find another way to battle the menace.

There’s a particular feel to 1950s science fiction films, and while there are plenty of great examples, The War of the Worlds is in many ways the most quintessential genre film o the period. Every possible trope you can think of is here, and may well have started here. It’s bombastic and histrionic and is the kind of movie that touts the benefits of Science! more or less in general, whether it’s actual science or not.

So, the meteors come down, and in this case we’re going to be southern California. Among those who are in the area and alerted to it are the aforementioned Dr. Clayton Forrester (Gene Barry), who is out fishing with a couple of colleagues. He goes to investigate and meets Sylvia van Buren (Ann Robinson), who doesn’t recognize him, although it turns out she’s a bit of a Dr. Forrester fangirl, having seen an article on him in Time and following his work on the Manhattan Project. When the Martians start emerging from their capsules, they start laying waste to everything, killing all electronics and electricity through powerful magnetism. Among the first to go is Sylvia’s uncle (Lewis Martin), who gets punked when he tries to communicate with the creatures.

What follows is wholesale destruction, and it’s pretty great. I mean, I know it’s just sets and in many cases miniatures, but The War of the Words does not hold back on the mass destruction of everything it can find. There are moments when it appears that stock footage of the destruction in Europe from World War II is used as examples of the Martian rampage, and the destruction we get to see is along the same lines.

Everything about The War of the Worlds is histrionic in the best and most entertaining way. At one point, the alien creatures are pursuing Clayton and Sylvia, and one of the creatures actually comes out of the craft to hunt them down. Forrester shines his flashlight on it, and then, when he sees it, hurls the flashlight away so he can throw things at it. Evidently, he decided that being in a war-torn landscape of mass destruction at night meant that he wouldn’t find a flashlight useful anymore. Later, after a very solid mob attack scene, Forrester is confronted by a few members of a civil defense patrol, and despite being just a few feet away from them, shouts at them as if they are across the city. It’s pretty entertaining stuff.

There’s also a natural, almost naïve trusting of science here. At one point, the decision is made to hit the alien craft with atomic bombs. Plenty of people turn out to watch and are clearly caught in the outskirts of the blast area, and end up covered in dirt, presumably loaded with radiation. No one seems to care.

What I genuinely like about this is that it gets a lot of human nature right. Forrester and a number of his colleagues are attempting to retreat to the hills so they attempt to find a biological way to attack the creatures (the A-bombs didn’t work). They don’t make it there, because they are attacked by a mob of civilians, who throw them out of the trucks and drive away. One man who doesn’t make it onto the truck has a suitcase filled with money and valuables, and attempts to bribe his way onto any vehicle he sees despite the fact that money won’t have any value in a destroyed society. At the end, Forrester looks for Sylvia in churches in the area, and all of the churches are loaded with people. This is despite the fact that the Martian war machines seem dedicated to destroying every building they can, and the taller the building, the more likely it is to be wiped out.

This isn’t a great film by any stretch of the imagination, but it is a really entertaining one, and one that I enjoyed watching a great deal. It’s probably no one’s favorite movie, but I’d find it difficult to believe that there are a lot of people who wouldn’t enjoy it on some level.

Why to watch The War of the Worlds (1953): Martians! Science! Mass destruction!
Why not to watch: There are moments when it is supremely goofy.

Email ThisBlogThis!Share to TwitterShare to FacebookShare to Pinterest
Labels: Byron Haskin, horror, science fiction, The War of the Worlds, war