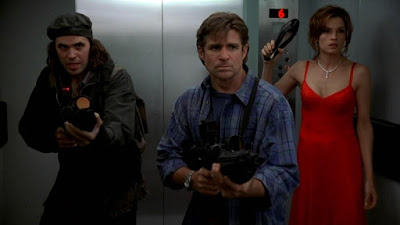 Every now and then, you come across a movie that you simply can’t explain in any logical way. The year before he made The Mummy, director Stephen Sommers made a movie that for the life of me I cannot fully fathom. I have no idea how he collected this group of actors nor how he made this film a reality. This is one of those films where the main cast is well-known and even most of the bit players are completely recognizable. Even more than wondering how he got this movie made, I wonder how the hell I didn’t know about it.

I don’t even really know how to begin with this. John Finnegan (Treat Williams, the poor man’s Tom Berenger) and his crew Joey (Kevin J. O’Connor) and Leila (Una Damon) have a boat that they hire out to anyone willing to pay. In this case, they are being paid by a group of mercenaries for an unknown project. Joey, who is Finnegan’s mechanic, goes snooping through the mercs’ items and discovers almost a dozen torpedoes. This snooping gets him beaten and creates some tension between the boat crew and the mercenaries.

While our boat folks don’t know what the mercs are doing, we have a pretty good idea. A large luxury cruise ship is on its maiden voyage in the South Pacific. This appears to be the intent of our crew of criminals. We get a little bit of what is happening on the ship. The ship’s owner, Simon Canton (that-guy Anthony Heald) seems ready to get the ship going in the right way. So when the ship suddenly stops dead with all communication out, it comes as a shock. And then something rams the ship and all hell breaks loose.

I won’t keep you in suspense here and I won’t go into a massive amount of detail for what remains. Essentially, the cruise ship is the target of the mercenaries. Their plan was to stop the ship and cut off all communication (which they did), hop on board and subdue everyone, send them all off in the lifeboats, take everything of value, and then sink the liner with the torpedoes. Unfortunately for them, there is evidently something large and covered in tentacles that has laid claim to this patch of the Pacific, and it gets there first.

So let’s talk about this cast. I rather like Treat Williams for who and what he is. He’s never going to be an Oscar-winning actor, but he’s likable and entertaining and seems like he’d be fun to go have a beer with. I’ve long been a fan of Kevin J. O’Connor for what he can bring to the table. Una Damon is what I’m going to call an “oh, her,” which I’m claiming as the female equivalent of “that guy.” You probably can’t identify who she is based on the name, but if you Google her, you’ll recognize her immediately. But this covers only the very basics of this cast. Our mercenaries are led by Wes Studi and his crew includes the always-great Cliff Curtis, serious that-guy Clifton Powell and two-time Oscar nominee Djimon Hounsou. Rounding out the cast is Famke Janssen as a thief on board the cruise ship who manages to survive the initial tentacle-filled attack.

The biggest issue that Deep Rising has is that the tentacle creature that has decided to attack the cruise ship is very clearly and obviously CGI. This was made in 1998 CGI was hit-or-miss. I can see this being acceptable CGI in 1998, but it has not aged well over the last 20 years. Additionally, it’s a shame in the sense that the following year Sommers made The Mummy that has some CGI that still manages to hold up decently well. Oh what a difference a year makes!

That said, this is a movie that clearly shows who is directing it. Chances are good that you’ve seen The Mummy and will remember some of the effects from it. A lot of the gore effects from Deep Rising look the same. It’s pretty clear to me that Sommers used the same effects house. Our tentacle monster is a messy eater, or at least one that doesn’t digest its food all the way, and our half-eaten people look a hell of a lot like Imhotep before he’s fully formed.

Let’s be honest here; Deep Rising is not going to be what anyone calls a great movie or even a good one in that sort of serious “this is an important and worthwhile movie” sense. This is not a meaningful film or an important character study. This is a creature feature filled with a shit-ton of giant guns, rampaging tentacles, and a few jokes to lighten the mood. It’s great in the way that fun science fiction movies are great. It’s a movie to watch with a group of friends who have all already seen it and to laugh with rather than at. Even the odd CGI (called “baby’s first Lovecraft” by my friend Angie) is fun in that ridiculous movie sort of way. Seriously, at one point Treat Williams and Famke Janssen drive through the corridors of a cruise ship on a Skidoo while being chased by spiked tentacles. How can you not want that in your life?

The biggest disappointment? This really looks like it was set up to be a franchise, and it never got there.

Why to watch Deep Rising: That cast!
Why not to watch: Honestly, the CGI does not hold up.