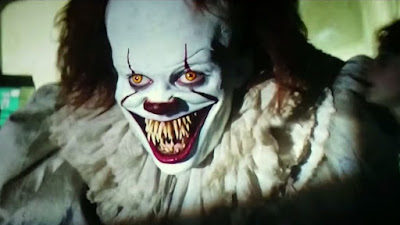 Earlier, Dell over at Dell on Movies posted a review of It from last year. Like a lot of people, he is pretty effusive in his praise, an opinion I fully understand. I felt like I needed to respond, after a fashion.

I’m old enough to remember when Stephen King’s It was the book that everyone was reading. Hell, I was reading it. The book is something like 1200 pages in hardcover and I read the thing in a week. While there are some moments in it that are completely cringeworthy, it’s a hell of a good story with some of the best moments of King’s writing that I’ve come across—and since I’ve read probably 1/3 to 1/2 of his output, that’s saying something. I have seen the television miniseries from a few decades ago a couple of times. So naturally, when the first half of It came out in 2017, I was interested.

I was well aware that despite this being essentially half of the story that it would probably have many of the problems that the miniseries did. It does. In fact, it has those problems to a significantly higher degree. One of the serious issues with King’s novel as an adaptation is that the damn thing is huge. It’s a good 400 pages longer than The Stand, and when that was adapted for television it had to be cut significantly. It is significantly chopped down into a running time of just over two hours. This has serious repercussions on the story that is told as compared with the original source material.

I’ll shotgun the basic story for you. A group of kids in a town in Maine slowly realize over the course of a summer that their town is home to a great evil. Their town is, for no apparent reason, more violent and terrible than other similar towns around the country but no one seems to notice. Every 27 years, disappearances of children escalate into an epidemic that somehow never really gets reported. And as they begin to investigate, they discover that there truly is something horrible lurking in the sewers of their town.

There are a lot of changes. The one that makes the most sense is essentially advancing when the story takes place. King’s novel takes place both in the past and the present. About half the novel concerns the main characters as children in the ‘50s and the other half with those characters as adults in the ‘80s, which was the present when the book was written. This film version sets the children’s portion of the film in the ‘80s, presumably with the next film taking place essentially now.

But this is a superficial and understandable change. The bigger change is just how much is lost from the original story. While it’s easy to argue that there’s a great deal of King’s novel that is unnecessary, one aspect of it that is done extremely well is the characterization of these kids. We get a great deal of insight into all of them. We get a lot of their thoughts and their internal life, and this is what makes them interesting as characters in the book. Virtually all of that is gone from the movie, almost certainly because of time constraints. So what we get, instead of six richly developed protagonists and at least one fully-realized human villain, is a bunch of kids who each have a specific identifying characteristic (one is fat, one wears glasses, one stutters, etc.) that allows for convenient identification.

And that’s the real problem with It in this format. A movie, even two movies, is absolutely the wrong way to tell this story. It, to really explore the depth of the characters and the world that is created, should be realized as a show on HBO or NetFlix or the equivalent. Two 10-episode seasons, one-hour episodes each, would probably be enough to tell the story and fully realize the horror that these kids experience over this single summer. The movie, for as well made as it is and as slick as the packaging, gives us merely the surface when there is so much more here. This would also prevent the necessity of changing the ending. The third act of this film is something that, except in the broadest possible strokes, doesn’t occur in the book.

I should probably mention Bill Skarsgard, who plays Pennywise the Dancing Clown, which is the more or less standard incarnation of the monster stalking the town in the film. Skarsgard plays the role with an understandable relish, this being the most realized and interesting character in the film.

I wanted to like It a lot more than I did. I think it’s a damn fine movie for people who never read the book. If you did read the book, you soon realize just how much is missing here, and it’s hard not to be at least a little disappointed.

Why to watch It (2017): A great update of the story.
Why not to watch: The best parts of the book are changed.

Posted by SJHoneywell at 9:20 PM

Email ThisBlogThis!Share to TwitterShare to FacebookShare to Pinterest
Labels: Andy Muschietti, horror, It