Ten Days of Terror!: Mystery of the Wax Museum 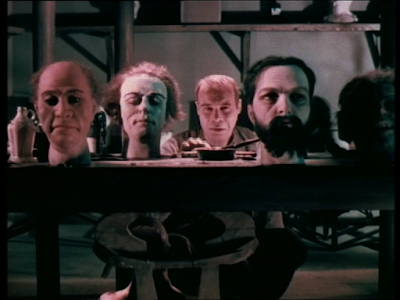 Early movies from great directors can be really fun. I’d love to say that’s the case with Michael Curtiz and Mystery of the Wax Museum, but Curtiz had dozens of credits before this film. He started directing more than two decades before this film. The man was a directing machine in the early years of talkies; Mystery of the Wax Museum was the first of seven credited films from him for 1933. It’s also an early color film, and it’s a hell of a lot of fun to see an early two-strip Technicolor movie.

The truth is that there’s a good chance that you’ve seen a movie a hell of a lot like this one already. If you’ve seen the version of House of Wax starring Vincent Price, you’ve seen a good percentage of this film, or at least the main plot. While the character names are different, many of the beats in the plot are virtually identical and a lot of the details are essentially the same as well.

Ivan Igor (Lionel Atwill) has a wax museum in London in the early 1920s. While he is an amazingly talented sculptor, his museum focuses more on history than on the horrors of the past and present, and so doesn’t draw much of a crowd. Igor’s partner, Joe Worth (Edwin Maxwell), proclaims that they are broke and the only pathway out is arson. Igor naturally disagrees, especially because it would mean the loss of his prized Marie Antoinette statue, and the two fight. The fire starts anyway, Joe Worth escapes and eventually claims the massive insurance money, and Ivan Igor is left in the building, presumed dead.

We jump forward a decade or so and move locations to New York. A wax museum is opening, run by Ivan Igor, who survived but was horribly burned. His hands specifically were destroyed in the fire, which means that now he is forced to have apprentices make the sculptures under his direction. There are three men working for him. These are the deaf-mute Hugo (Matthew Betz), drug addicted Professor Darcy (Arthur Edmund Carewe), and the relatively normal Ralph (Allen Vincent). As it happens, Joe Worth is in New York, too, and is now a bootlegger who employs Professor Darcy.

The last few people we need to bring into the mix start with Florence Dempsey (Glenda Farrell), a reporter always on the verge of being fired by her editor, Jim (Frank McHugh). As it happens, her roommate is Charlotte Duncan (Fay Wray), who happens to be engaged to Igor’s apprentice Ralph. When the film shifts to New York, one of the big news stories is the evident suicide of socialite Joan Gale (Monica Bannister). The police think it might be a homicide, though, and have her former boyfriend George Winton (Gavin Gordon) in custody.

Of course, there’s no real mystery that is happening here, assuming you’ve seen the remake with Vincent Price. You know how the statues are being made, and you know why the body of Joan Gale have vanished from the morgue. In fact, you know who has stolen it.

What this version has that the remake doesn’t is the newspaper angle and the character of Florence Dempsey. Glenda Farrell had a career in the years after this film portraying a character named Torchy Blane, who was a female news reporter. I haven’t seen a Torchy Blane movie, but I can’t help but think that Florence Dempsey informed her a little bit. Farrell played Blane in seven of nine Torchy Blane films and served as the inspiration for the character of Lois Lane. She’s a huge part of the fun of Mystery of the Wax Museum, and the one thing that is genuinely better in this original than in the remake.

And really, that’s the biggest issue here. The remake is better in almost every regard, not the least of which being Vincent Price in the mad sculptor role and Charles Bronson as his mute assistant. Well, I supposed that Fay Wray is a good addition here as well, because she’s a lot of fun in these early pre-Code films. Mystery of the Wax Museum is a bit of fun. It’s not scary, not really that tense, and there isn’t a great deal of mystery, but it’s goofy and silly, if a little too short at a mere 77 minutes.

Why to watch Mystery of the Wax Museum: Pre-Code horror, and Glenda Farrell’s portrayal of a pre-Lois Lane Lois Lane.
Why not to watch: The Vincent Price version is so much better.