Ten Days of Terror!: The Picture of Dorian Gray

Film: The Picture of Dorian Gray
Format: DVD from NetFlix on laptop. 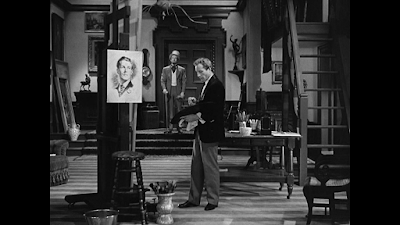 One of the problems of a lot of Code-era horror films is that they aren’t really that scary. There are a few that genuinely try to get there, but especially the Gothic stuff is more fun than it is frightening. Some really do go for at least disturbing implications. That’s absolutely the case with The Picture of Dorian Gray, a film based on the classic Oscar Wilde novel. There’s nothing here that would cause most modern horror fans to consider this much of a horror movie because there’s nothing here that is really overtly horrific. All of the horror is much more internal and much more subtle, which makes it so much better.

It’s likely that you already know the basic story. Just in case you don’t the elevator pitch is pretty simple. A young man named Dorian Gray (Hurd Hatfield) has a portrait painted of himself. Due to the influence of the morally bankrupt Lord Henry Watton (George Sanders), Gray makes a wish that he remain young while the portrait ages. This wish more or less comes true. Dorian Gray remains a young man while the portrait ages. However, the portrait doesn’t merely get older; it also essentially reflects the quality of Gray’s soul. As his physical being no longer reflects any consequence of his actions, Dorian Gray becomes more and more morally bankrupt and his portrait becomes more and more terrible as the years progress.

A few details would probably be helpful here. Dorian is introduced to Lord Henry at the home of artist Basil Hallward (Lowell Gilmore), the man painting his portrait. It is here that Lord Henry, who is very much a Wilde character in that he’s charmingly dissolute, tells Dorian to live his life while still young and not regret doing anything. It is here where Dorian more or less offers his soul for eternal youth. Taking that into consideration, Dorian goes slumming and winds up at a seedy bar where he sees a performance from Sibyl Vane (Angela Lansbury, Oscar nominated in a supporting role). He is immediately smitten and the feelings are mutual.

Despite their class differences, Dorian plans to marry the young, innocent singer. Lord Henry suggests a test that ends in Dorian breaking off his engagement with Sibyl and compensating her with a large sum of money. This cruelty causes a change in his portrait—he’s done something terrible and himself remained unchanged, but the portrait’s expression has become harder and crueler. When Sibyl commits suicide, there is a momentary guilty for Dorian, but he soon embraces his ability to do anything he wants without personal consequence. Naturally he is forced to hide the portrait since it displays not so much his appearance as his soul, but beyond that, he becomes a hedonist of such reputation that virtually everyone he knows begins to shun him.

The only person for whom Dorian is not a complete unrepentant bastard is Gladys Hallward (Donna Reed), who was a child when Dorian’s portrait was painted. Now an adult, she has continued to love Dorian, who (thanks to the portrait) still looks as if he is in his early 20s. When her uncle Basil sees what has become of the portrait, though, Dorian realizes he needs to go and straight up murders him so that Basil can’t tell Gladys about the reality of who Dorian is. Covering up the crime results in more deaths. The portrait becomes more and more hellish as Dorian continues to act in terrible ways.

One of the more interesting features of The Picture of Dorian Gray is that, while the film is in black-and-white, it jumps into color at a few points. It does this specifically to show us the portrait. The initial moment of this is surprising and rather beautiful. It’s equally shocking when we see it again, decrepit and deranged in the middle of the film. That shock moment of seeing the “revised” picture in full color is one of the best moments of the film, and the picture itself is a shock. I’ve seen it—it’s in the Art Institute in Chicago. It’s a horrifying painting, and it makes for one of the great moments in the film.

Another pleasure of the film is the performances. Hurd Hatfield is an odd choice for Dorian Gray, because he’s not the epitome of beauty that he’s depicted as in the story. Hatfield is turned into something cold and distant here rather than the emotional hothead of Wilde’s tale, and he works for that read of the character. Lord Henry is perhaps the most George Sanders of George Sanders roles. He’s a cad, but a charming one. One of the great moments in the film happens when he realizes exactly what his advice has led to in the life of Dorian Gray.

But the real pleasure here is Angela Lansbury. Only those who delve into old film know the truth of Lansbury’s early career. She was shockingly beautiful to go with her clear talent as an actress. Even better, she was a singer before her acting career, and in this, we get to hear her actually sing. She’s not in the film for long, but she’s a delight when she’s there.

I’m so pleased to have seen this. While it makes some changes to Wilde’s story, the changes all work here and the resulting film is both interesting and horrific on a deep level. That’s why I love these older horror movies; when they’re done right, the horror is the best part of them.

Why to watch The Picture of Dorian Gray: A great story and a very young Angela Lansbury.
Why not to watch: No good reason—this is damn fine ‘40s highbrow horror.