Ten Days of Terror!: The Legend of Sleepy Hollow

Film: The Legend of Sleepy Hollow
Format: DVD from Plano Community Library through interlibrary loan on The New Portable. 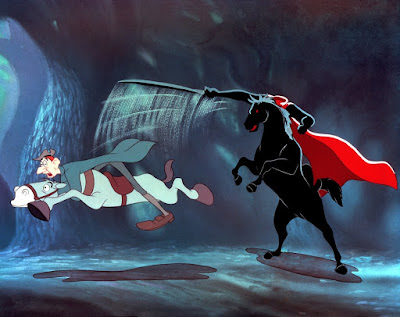 When it comes to horror movies, I don’t typically think of Disney. I’m guessing most people don’t. Oh, certainly there are some horrific elements in plenty of Disney films; the transformation sequence in Pinocchio, for instance, is pretty traumatizing for young children. The Legend of Sleepy Hollow isn’t really that scary, but it certainly has a clear connection to the horror genre. In truth, this is only half a film. It’s the back half of a feature called The Adventures of Ichabod and Mr. Toad. The first half is a truncated version of Kenneth Grahame’s “The Wind in the Willows,” while the second half is a musical version of Washington Irving’s story.

The two stories are very different, not just in that one is British and the other American or that one is based on a children’s book and the other a classic folktale. No, The Legend of Sleepy Hollow has virtually no dialogue. Instead, the story is more or less entirely narrated by Bing Crosby. The closest we get to dialogue throughout are some songs, and in this respect, Bing is going to play both our hapless main character Ichabod Crane and his rival, Brom Bones.

I’m assuming you know the basics of the story, and really, you should if you don’t. In its original incarnation (and not the Tim Burton amped-up-on-steroids version), this is a classic tale of rivalry. In fact, this version of the story needs to work a little bit to maintain even a hint of actual supernatural spooks here. In truth, it’s pretty much a straightforward tale of one rival eliminating another.

Our hero, Ichabod Crane, is a schoolmaster who shows up in the town of Sleepy Hollow, which, if memory serves, is in upstate New York. Ichabod, or “Icky” as Der Bingle likes to call him, is a weird looking man, but he’s got a few things working for him. As the schoolmaster, he has position in the town. He also makes good with the local kids, mostly so that he can be continually invited to one dinner or another around the town. Ichabod also, at least in this version, sings like Bing Crosby. And, finally, he takes real pride in his ability as a dancer.

Ichabod’s main rival is Brom Bones, and specifically, the two are rivals for the affections of Katrina Van Tassel, the daughter of Baltus Van Tassel, the richest farmer in the area. Brom, who seems to be a template for what would eventually be the Gaston character in Beauty and the Beast, is pursuing Katrina because, well, he’s more or less Gaston and thinks that he kind of has a right to. Ichabod is attracted to Katrina not just for her own sake but because of the wealth that she represents. In that respect, I rather like that the film isn’t going to pretend that Ichabod isn’t particularly mercenary.

Anyway, the courtship goes well, with Ichabod consistently getting the better of Brom in virtually every instance. Everything comes to a head at the Van Tassel’s Halloween party. Ichabod shows up and demonstrates his dancing skill as well as his prodigious appetite. But here is where Brom finally comes into his own. In what is probably the best moment of the film, Der Bingle croons out a tune about the Headless Horseman, which seems to be a pure fancy from the mind of Brom. We’re told that Ichabod is more susceptible to tales of the paranormal than the typical person, and Brom exploits that by creating a tale of a horseman who rides around looking to claim heads to replace his own. And, of course, we’re going to get a meeting between Ichabod and the Horseman before the movie is through. Because of course we are! That’s the entire point!

If I have a complaint here, it’s that this is just too damn short. I’d love this to go on for another 10 minutes or so. The story can’t really sustain much more than that, and it might really not be able to sustain even that much before becoming far more than it really needs to be. This is classic, fun Disney, though—the sort of family entertainment with just a hint of scares that would be inoffensive and entertaining to just about everybody. You’d have to be a very little kid to be too disturbed by the story being told here. The animation and Bing Crosby make it a lot of fun. And hey, the first half of the movie is a classic story and narrated by Basil Rathbone, so it’s even better.

Why to watch The Legend of Sleepy Hollow: It’s cute and harmless and a great story for kids.
Why not to watch: I really want it to be longer.