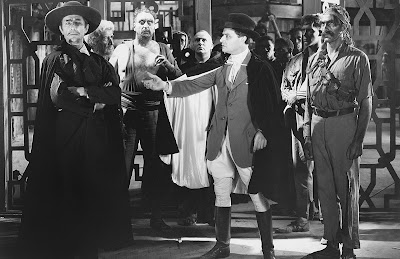 I’m mildly fascinated by depictions of Voodoo in film. There are a couple of ways that it tends to be shown in film. The standard view is that Voodoo is practiced by people entirely captured by evil and completely corrupted. The Voodoo priest is shown as wicked and cavorting with dark forces beyond the control of humanity. Rarely, you get a film like I Walked with a Zombie that treats Voodoo as something to be respected as another equal worldview. A movie like The Serpent and the Rainbow does a little of both, showing it that Voodoo is a legitimate belief system that, like any other, can be used for evil. Sadly, White Zombie is much more of the first stripe than the others.

Like many an early horror movie, White Zombie runs just a touch over an hour and doesn’t have a great deal of real story. This is legitimately it: Madeline Short Parker (Madge Bellamy) comes to Haiti to be with her fiancé Neil Parker (John Harron). On the trip she meets Charles Beaumont (Robert Frazer), who falls madly in love with her. Unable to get her to reciprocate his affections, he takes his problem to local Voodoo guy, zombie controller, and sugar mill operator “Murder” Legendre (Bela Lugosi) who convinces him to turn Madeline into a zombie. He does, and she “dies” soon after, only to be revived and ensconced in Beaumont’s house. But he’s not happy with her as a zombie, and soon he learns that Legendre wants him as a zombie servant, too.

This is literally the entire story of White Zombie. Bela Lugosi gets a lot of mileage out of close-ups of his eyes with one brow raised. We’re also led to believe that his posse of zombies knows to do his bidding when he clasps his hands in a particular way. This is honestly one of the main problems with the film, because this isn’t explained at all. Whenever he clasps his hands, one over the other, the zombies go on the march. They don’t even have to see him, and he never has to tell them what to do. They just act according to his ineffable will, and that’s never fully explained to us.

Really, though, White Zombie is a pretty standard “damsel in distress” horror movie from the pre-Code era. We can pretty much rest assured that Madeline is going to make it out the other side despite her zombification on her wedding night. That’s because this is the way this sort of film works. If the zombie process is a one-way trip in theory, the main character who gets zombified is going to be okay by the time the final credits roll. This is even if (and especially) if that can’t or doesn’t happen to anyone else.

White Zombie exists for a couple of reasons. The first is to capitalize as much as possible on the reputation Bela Lugosi earned from being Count Dracula. The man was clearly and obviously typecast after that role, but at this point, he was still riding high as the man who was both an iconic undead creature and exotic enough to be considered romantic. It’s a pretty good role for him, especially since all he really has to do is stand around and look creepy and sometimes raise an eyebrow in close-up.

But there’s not a great deal else here that’s very interesting. It’s cool that this is the first movie to introduce the concept of zombies to the cinema, at least in terms of feature-length films. And yes, these are the classic zombies that are undead servants rather than flesh-eating ghouls. It’s also true that at least some of the movies that follow that also explore Voodoo (I Walked with a Zombie and The Serpent and the Rainbow in particular) do so with more respect and class. But this is where those movies started, and that’s worth something.

But really, we can’t even give the religion to the Haitian people? The power of Voodoo has to be used for evil and controlled by a white guy? It’s not terribly surprising, although it is disappointing. In fact, it’s far more surprising that I Walked with a Zombie from 1943 treats the subject with such respect. Still, it’s hard not to be at least a little sad when an entire culture is co-opted and called evil.

Why to watch White Zombie: Zombies!
Why not to watch: In true whitewashing fashion, the guy with all the power, even the Voodoo power, is a white guy.