Ten Days of Terror!: The Ghost of Yotsuya 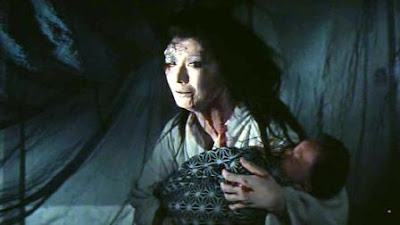 One of the things I find interesting about horror movies is that horror is often cultural specific and yet there are some universals. Ghost stories seem to be universal in the general if different from culture to culture in the specific. The Ghost of Yotsuya (Tokaido Yotsuya Kaidan for those who prefer the original Japanese) is a good case in point.

Like many a Japanese film, The Ghost of Yotsuya is a tale of samurai, sort of. It’s worth noting that “Yotsuya” is an area of Japan and not the name of the character, so this is about a ghost that more or less haunts a place, not a ghost of that name. Anyway, we have ronin Iemon (that’s EE-eh-mon) Tamiya (Shigeru Amachi), who desperately wants to marry Iwa (Katsuko Wakasugi) despite the wishes of her father. Enraged by being rebuffed again, Iemon kills Iwa’s father and his manservant, leaving his own manservant Naosuke (Shuntaro Emi) to clean up the mess. In fact, he claims that her father was killed by another samurai.

Iwa and her sister Sode (Noriko Kitazawa) want vengeance, so Iemon, Naosuke, and another suitor named Yomoshichi (Ryuzaburo Nakamura) head off to find the samurai that Iemon claims is guilty. Since Yomoshichi is the main suitor for Sode, and because Naosuke wants her for himself, our villainous pair conspire to kill him along the way, dropping his body off a waterfall. Eventually, Naosuke runs away with Sode, leaving Iemon and Iwa alone in something far less than marital bliss. Iemon, we learn, is a poor but constant gambler and has no real source of income. In fact, he owes a good deal to Takuetsu (Jun Otomo), a man who seems quite taken with Iwa himself.

Eventually, Iemon saves the life of Kiemon Ito (Hiroshi Hayashi) and his daughter Ume (Junko Ikeuchi). Suddenly, he sees a light at the end of the tunnel. If he can continue to provide service to Kiemon Ito, perhaps he’ll allow Iemon to marry Ume…since no one seems to know about his marriage to Iwa. While the sisters are still kept apart, Iemon and Naosuke still meet up at times. Naosuke takes the role of Lady Macbeth here, convincing Iemon that if he simply gets ride of Iwa, he’ll be able to marry Ume, and really, what’s one more murder?

And so, Iemon slips his wife some poison, and also implicates Takuetsu in her death by claiming that the two were having an affair and destroying his honor. With those two dead, he is free to marry Ume, but of course this is a ghost story, so neither Iwa nor Takuetsu are going to stay peacefully dead. And when Yomoshichi shows up still alive, suddenly Sode has a number of questions that need to be answered.

There’s a lot to unpack in The Ghost of Yotsuya, which seems a bit strange for a movie that runs a scant 76 minutes. That’s both a blessing and a curse here. On the one hand, this is a movie that doesn’t overstay its welcome. It’s efficient in its storytelling, giving a pretty complicated and complex plot in a very short running time. Despite this, it’s a very slow starter. The titular ghost (actually two ghosts) doesn’t show up until the third act of the film. It’s a long way to go in a short film to get to the stuff that seems to be the point of the entire story. That seems by design, though. We need the full set up of who Iemon is to get to the point where he is haunted and deserves it.

It’s also not boring in the main, although it does slow down in the middle. The middle section of the film involves most of the intrigue going on, so it’s necessary for the plot as we experience it, but does drag here as we have to find out the sort of man Iemon really is, the true depths of Naosuke’s deviousness, and figuring out how to get Iemon married a second time. Once that marriage happens, though, things speed up very quickly and take us quickly to the final, expected conclusion.

The Ghost of Yotsuya is very stylized, and that’s also both a benefit and a problem. If you’re interested in the sort of traditional Japanese theater that was often used in, say, Kurosawa films, you’ll find a lot resonating here. If that sort of staged style rubs you the wrong way, this will be a rough ride.

I liked it. It’s one I’d watch again, although it’s also one I would need to be in the mood to watch again. Truthfully, it’s not going to replace Throne of Blood for samurai ghost stories, but it’s still worth a look.

Why to watch The Ghost of Yotsuya: A classic ghost story.
Why not to watch: It’s too short and the ghosts don’t show up until the end.